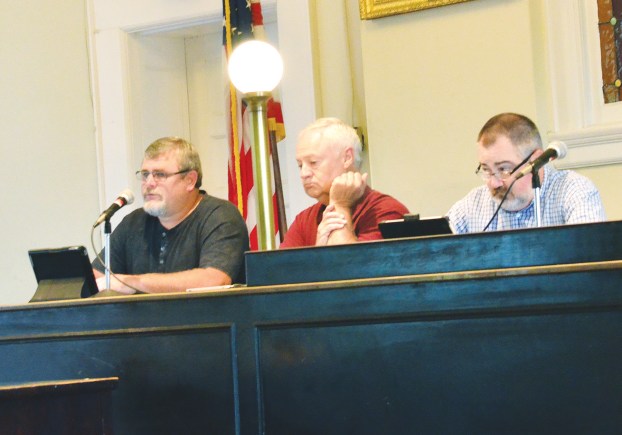 STANFORD — Lincoln County Fiscal Court members gave their approval of the 2019-20 real and personal property tax rates in a public hearing at their Aug. 27 meeting at the Lincoln County Courthouse.

By law, the fiscal court has to set the personal property tax rate at the same rate as for real property.

Before the court made a motion on the new tax rates and voted, there were no public comments offered in the public hearing.
However, each of the magistrates and Judge Jim W. Adams weighed in.
“I’ve always got a comment about the tax rate,” Stanley said. “A couple weeks ago when we were talking about it, I was against it. I discouraged the tax raise. We’re not in dire need, I don’t think. We don’t want to get our rates higher than other counties around to discourage anything from coming in. I think there are probably some other things we can do to raise that amount of revenue or maybe even save in some other areas. The court seems fit to pass it, but I felt it’s something we didn’t need to do at the time.”

Faulkner pointed out that he and Stanley agree on most things, but not the issue of raising tax rates.

“I don’t know if you all are aware of the fact that the 911 issue has not gone away. The City of Stanford, the Water Board decided at the last minute to appeal the last ruling, so we’re right back at the starting point again of waiting on the courts for … there’s no way of knowing. It could be another two years,” said Faulkner. “So we are potentially looking at having to dump that general fund money back into the 911 Center or back to support 911. The tax rate that we’re proposing doesn’t come close to covering that additional demand on our revenue. It’s a fraction of what we’re going to have to put out so, thanks to some of the other local government entities, we’re back in the hole again. So it is a necessity, in my opinion, for us to do this.”

Pruitt said he understood Stanley not wanting to raise tax rates, but also understood the need to do so.

“I don’t take raising taxes lightly. I know people have a hard time and, ideally, we’d like not to raise taxes, but what do you want me to cut out?” he asked. “Health insurance has gone up 33 percent, rock has gone up, gravel has gone up. I think we, as the fiscal court, have done a good job of managing the money. It’s not that we’re raising it because it’s going to make things easier on us, but it’s going to make things better for the people of Lincoln County.”

“It’s things to help the community. The only thing I have an issue with is everybody paying their fair share,” Pruitt added. “I’m kind of like Joe, in that I don’t like to raise taxes but …”

“If you’re sitting in this seat, you have to ask for a rate increase each and every year,” he said. “The cost of living goes up every year. We like to give our employees small increases pretty much tied to the cost of living. Rob Wilson (jailer) gives his employees increases, Curt Folger (sheriff) gives his employees increases. Curt Folger wants a new car. Rob Wilson wants a new jail. If we sit here on our hands and pass up a modicum of an increase in our revenues then we are going to put ourselves in a hole, a financial hole. Yes, we’re in pretty good financial shape because of what we’ve done. We’ve taken a 4 percent revenue increase. That’s $4 on a $100,000 house. I, for one, turned 65 this year. I get a $40,000 tax exemption on my property. Now, how fair is that? I should be paying. Lee Ann (Smith, county treasurer) has got three kids. She’s not getting a $40,000 tax exemption on her property. Now …“

With that, Adams said he was “going to stop my preaching” and ask for a motion at a 4 percent increase of assessed property to 10.7 cents per $100. Faulkner made the motion for both real and personal and Pruitt seconded both motions.

The fiscal court voted in executive session to remove all landline fees for 911 effective Oct. 1, 2019.

“We will let Russ Clark (Bluegrass 911) know and I hope we will get that done,” Judge Adams said. “Anyone who has a copy of their landline phone bill -– I want to make that clear that it’s the landline phone and not cellphone – and a copy of their water bill where they paid for the same month can bring those here to the office (Judge Executive’s Office in the courthouse). We will make copies of the bills. Then, at the next fiscal court meeting, we will approve payment of the excess fee they paid.”

Adams called Donnie Gilliam, Lincoln County Emergency Management Agency (EMA) director, and Trish O’Quin, EMA deputy director, to the floor, informing the court that the two had been asked to speak at a national conference.

Gilliam said that it had been requested that he and O’Quin come and speak at the annual Pipeline Safety Trust Conference. He said that one of the organizers of the conference, who is in Seattle, Washington, saw the Aug. 22 article by The Interior Journal on the first responders’ meeting detailing lessons learned from the Aug. 1 gas pipeline explosion and asked if they would be quest speakers.

This year’s Pipeline Safety Trust Conference is being held in November in New Orleans, Louisiana.

The fiscal court addressed seven other issues in its Aug. 27 meeting.

• Approved hiring of Thomas Sandlin as a probationary part-time employee of the Animal Shelter.

“We’re going to try the animal shelter with one full-time employee, our Animal Control Officer David Snyder, and three part-time employees,” Adams said. “Hopefully that will work out and you’ll save some dollars on insurance and retirement. This young man seems to be working out so far.” Sandlin was hired at $10/hour retroactive Aug. 18.

• Took into county maintenance Powell Martin Lane for a distance of 350 feet.

• Appointed Shane Yocum to the Lincoln County Fire Board.

“If Keith Kirkpatrick’s term is expired and he is court-appointed, we can appoint him,” Adams said. Stanley made a motion to appoint Yocum to the board. “He’s the only person that has come to us and asked us, and I believe he is qualified and could bring a lot of knowledge to that fire board,” he said.

• Garlan VanHook informed the court that structural engineers have said the Newland house on Boone Road will have to be shored up from the inside rather than the outside. Currently organizing with a scaffolding company out of Lexington the number of parts and pieces and the monthly rental costs. VanHook said his ambition is that, for the money available, “we are going to be able to secure the building, new roof, all the walls secure and windows and doors to secure the building, but there may be some of the interior work, the carpentry work on the inside that we actually repair.” He said the house still has a lot of “unknowns.”

• Gloria Sneed inquired if anything could be done about school traffic on KY 328 in Waynesburg. According to Sneed, school buses have to pass 70 cars each day to get to school. Court Attorney Daryl Day said the easy answer is for more kids to ride buses. ”If more kids rode the bus and half the kids weren’t picked up by parents, that would solve the problem,” he said.

• Amanda Gearheart of the Lincoln County Public Library was presented all county ordinances codified into one notebook so that county residents can go to the library to look up ordinances.

STANFORD — As the United States was putting a man on the moon in the summer of 1969, the Stanford... read more