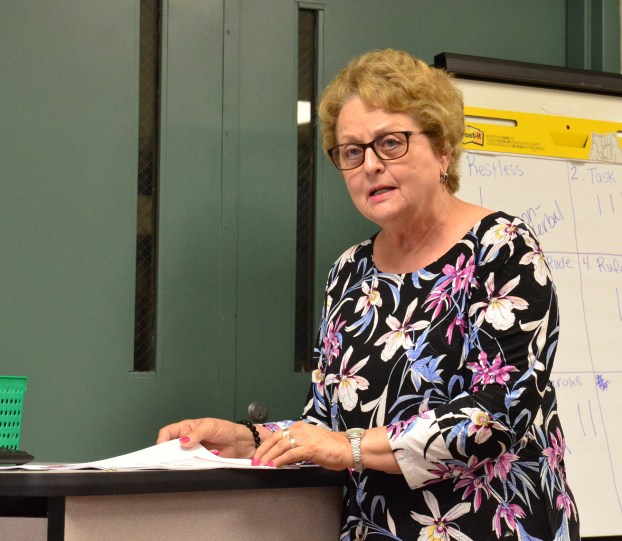 CHRISTINE KILLEN, School Readiness Coordinator, reported on the performance of the Early Childhood Program over the past year during the August school board meeting.

STANFORD — It’s a given that there is a need for young children to have high quality environments that support and promote their optimal development — and that requires much more than being watched, fed and kept safe.

Christine Killen, School Readiness Coordinator, and the Lincoln County Early Childhood Program are in place to see that as many local children as possible get the caring and nurturing needed to stimulate their growth through intentional teaching and planned activities.

The Lincoln County Preschool/Head Start/Early Head Start program is a state and federally funded education program which operates under the auspices of the Lincoln County Board of Education. The program is a high quality, comprehensive, interdisciplinary program serving children ages birth to four-years of age and their families.

“We serve 220 families in our 3 and 4-year-old program and 30 in our infant/toddler program,” Killen said. “ We had 261 volunteers in our program for 4,224.5 hours. We had 126 males that volunteered or participated in some of our program activities. 93 percent of our parents were engaged in some way in their children’s education and we do a parent satisfaction survey every year and this year was 100 percent parents satisfied with their services.”

When it comes to expectations for the county’s youngest learners, the Early Childhood Program sets high goals.

“Our goal is that 90 percent of our children will be at or above their expected level across all the domains, which are social/emotional, physical, language, cognitive, literacy and math,” she said.

In her report to the board, Killen presented proof of goals achieved from the fall to spring sessions last school year. The statistics show the percent of children who were either proficient or distinguished.

In a more specific breakdown, the numbers were:

Of the daily average of 88 percent for both programs, Killen said the total was “phenomenal” considering the attendance numbers included “infants and toddlers and lots of ear infections and all those kinds of things.”

While pleased with the program’s performance this past year, Killen says self-assessment reports show that they have some work to do in certain areas. One area of note was teacher breaks.

“We found we need to work a little bit better on getting our teacher’s breaks covered,” she said. “We’re kind of between a rock and a hard place because Fair Labor laws say that our teachers and teaching assistants have to have breaks but then the state of Kentucky says you have to maintain a 2 to 20 ratio with your children. We are still in the process of looking how to do that.”

Killen said the Early Childhood Program has 47 full-time staff members. Seven of those participated in 98 hours of college-accredited classes and all participated in 2,332 hours of professional development. All teachers and teaching staff have CPR and first aid training.

Some children turned away

At the conclusion of her presentation, board member Alan Hubble asked, “Is it a fair statement that about half of all incoming kindergarten students have gone through preschool?”

“It’s around 43 percent,” Killen answered. “Ideally, we should be having every 4-year-old in preschool … It’s really heartbreaking to get a phone call from a parent – and they get very irate, saying ‘I pay taxes. I do this. Why can’t my children come?’ But we have to meet our eligibility criteria, which is basically based on income, if a child has a special need, if it’s a foster child, a homeless child, some of those things. We have to turn away a lot of children.”

Head start has been in Lincoln County since 1965 and children have always had to qualify (income eligible or criteria set by government).

“Every year the federal guidelines come out on income and we have to go by that,” Killen said. “Now, the state-funded is a little bit more. In head start, you can go up to 130 percent above the poverty guidelines. In the state, you can go to 160 above. But the problem being is that we just don’t have the facilities and the state doesn’t nearly give us enough money. We get maybe $5,000 or $6,000 from the federal government for a child where the state gives you $2,500. Those numbers are not accurate, but that’s the comparison. What we get right now from the state would not pay, really, a teacher’s salary. That’s for 25 kids but it’s not enough to pay what it would cost for a classroom.”

“We keep striving so one of these days maybe all 4-year-olds will be able to come through another funding source or something,” she added.

Of note, Killen said that of the 232 Lincoln County High School students that graduated on May 2019, 109 or 47 percent attended preschool or head start.

Superintendent Michael Rowe reported that “In God We Trust” plaques would be in place at each of the county schools prior to the start of the school year.

“We’re required by law now to, in every school, have a plaque or a student-made sign that says, ‘In God We Trust.’ As a district, we’re buying a plaque for each of our schools and that plaque will be up in place before school starts,” he said. “By law, we’re required to have it in a prominent location in the school. Most districts are putting it in their front lobby.”

Rowe informed the board that the Partner for After School Success (PASS) would be implemented at Stanford Elementary School.

“This past year we were informed that Stanford was going to lose it’s 21st Century Afterschool Program. We’ve been able to now partner with PASS. It’s through the United Way,” he said. “They’ve been working out of Kings Mountain the last few years, providing services for Waynesburg. Waynesburg was lucky to obtain a 21st Century Afterschool Program. So now what we’re doing is we’re having PASS come to Stanford and they’ll be offering something similar to a 21st Century Program. It will be limited to 45 students with the staffing and funding that we currently have. I’m excited that we found something to be able to offer to our kids at Stanford since we’ve lost that grant.”

The board approved several action items in the August meeting. Those items included:

• Second reading and approval of the 2019 KSBA Recommended Policy Updates.

• Approved the memorandum of agreement with the Commonwealth of Kentucky for Billy Harris for the 2019-2020 school year.

• Approved to match the Key Enabling Technologies (KETS) offers of assistance in the amount of $71,123. For updating education technology in the district.

• Renewed the yearly contract with Lite the Nite Technologies to obtain E-rate and other funding. Offered by the FCC to schools and libraries to pay for enhancement of internet and phones in the district. Paid Steve Smith $4,500 last year and got back $145,000 in E-Rate funds.

• Created a seven-hour Instructional Assistant position for the 2019-2020 School year to be paid through Exceptional Child Funds.

• Created a four-hour district-wide Substitute Bus Driver/Monitor position. Donnie Leigh, Director of Transportation and Safety, said that there was not one day last school year that at least one sub had to be found for a driver and “as many as nine drivers on some days.” Also noted that a driver was needed to transport kids to the Kentucky School for the Blind in Louisville and that that required mid-day pickup on Fridays which meant the driver could not run a county route.

• Approved an increase of 20 Days for all 21st CCLC site coordinators.

Two citizens asked to address the school board during its latest meeting, with Greg Snow and Gloria Sneed signing in to speak. As is the rule, each one was given two minutes to present their praise, complaint, etc.

Snow was the first to speak and he started by saying the implementation of the Summit program at Lincoln County Middle School was a liability.

“I’ve been preaching about the Summit program. I know it’s going to be the curriculum for the middle school this year. I came up and I tried to do the appeal and, of course, it was a technicality on a 10-day appeal window process, so you all didn’t get to see it. It got denied,” Snow said. “But on the appeal process, it was a liability. I brought up the numbers. I said I had 29 to 30 or I had close to 30, and it could be 50 or more. Just happened to hear from a parent today that’s transferring their kids out of the school district. Now I don’t know how much it went up, but the number is 57 kids have transfer requests out of the middle school. Now however many of them is going to homeschool or not, I don’t know. But if that’s not a liability to this school district … By the numbers I’ve got, even at 4,000 that’s $230,000, roughly. That’s a big loss. That’s a liability to the district.”

“All I want is communication. I want you all to understand these numbers are a liability to our district. It don’t matter if there is 57, 60 or 65.”

Superintendent Rowe, after verifying the numbers with school records, said that the actual number of kids having transfer requests out of the middle school was actually five.

While at the podium, Snow addressed a related but different issue.

“And on the other hand … I’ve been trying to communicate with some people, different people, three or four a matter of exact, in the system about my daughter,” he said. “I don’t know if she’s being retaliated against or not – I would hope not – but if you’re on this side of the fence, it doesn’t look very well. Anyone that knows my daughter, she is a straight A student, never made below an A in math in her life. Now I don’t know if IReady has anything to do with it or not but she gets put in basic math to get put on a team in a school that she only knows two people. I don’t know what’s going on but, if you’re on this side of the fence, it don’t look good. She’s a straight A student. Had one B and that was in the Summit class last year. We overcame that. She’s in advanced science. I trust 99.9 percent of the teachers over any of the testing you do for your scores for your money for this district.”

During Sneed’s time at the podium, she simply had a request.

“I would appreciate it if you would live stream the board meetings,” she said. “I’m not asking for that to be the minutes. We still need a secretary to have official minutes, but sometimes my mouth flies open at stuff that’s said here because I am in shock from up there and back here. If you live-streamed it, I wouldn’t have to go all around Lincoln County saying, ‘My mouth flew open when so-and-so said’ … I could pull out my phone and say, ‘Right here’s what they said. Right here’s what they did.’ We could get a student, just like we’ve got a student representative right here, to do the videoing and the posting so that the community as a whole (can see). Tonight’s open house across the county and there are people that wanted to be here that are not here but if you live streamed … I know Mr. Hubble’s concern was comments, but if you record it and post it later there can’t be no comments.”

Sneed noted that she had 287 views on a video which she made of a recent meeting.