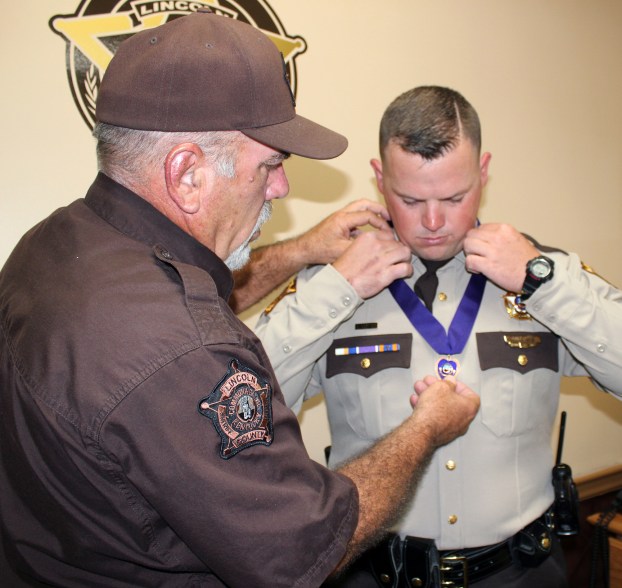 Reik, one of at least five people treated for injuries following the explosion, helped rescue an elderly man and woman from their burning home.

“Without him being there at the right time, we could have had more casualties than what we had,” Pudy said of the deputy in a facebook post. “He said it was so hot he could feel the heat through his windshield and ‘there was fire everywhere.’ His courageous actions likely saved two additional lives from being lost.”

The heroic action taken by Special Deputy Reik to help rescue the elderly couple following the tragic explosion was not the first time he faced danger in the line of duty.

The following story, originally published on Sept. 21,2017, details the result of another incident.

By Abigail Whitehouse
Lincoln County Sheriff’s Special Deputy Colby Reik has been awarded the Purple Heart award for wounds he received in the line of duty in January.

Reik was wounded in the arm during an exchange of gunfire following a traffic stop. Reik, who was shot twice and was airlifted to the University of Kentucky Chandler Medical Center, had pulled over a vehicle he suspected was carrying a man wanted for suspected drug dealing.

“This is just one small token for the service that he has given to our county,” said Lincoln County Sheriff Curt Folger. “Our lives are in danger at all times, but I’m glad this is the only Purple Heart that we’ve ever had to give and hope it’s the last one.”

Folger said law enforcement agents never know when they leave their homes whether they will return.

“I thank God every day that I’ve got a good team that knows how to do their job,” he said.

Reik said it’s an honor to receive the award but it’s not one that he ever expected to receive.

“I’ve always seen on the news and other things, other people get the award, knowing what an honor it is to serve your community and country and get an award like this. It’s just a privilege,” he said.

Reik was also awarded the Gallantry Award for displaying actions above and beyond the call of duty.