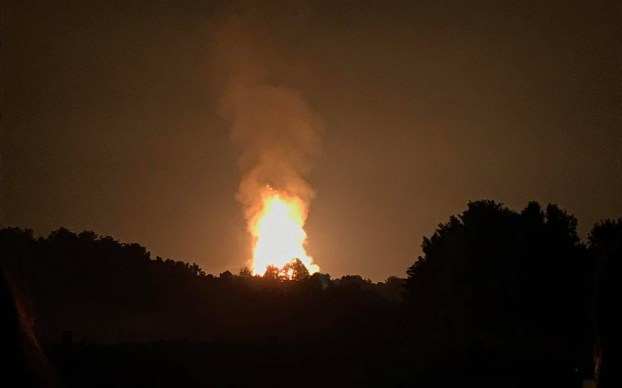 Everyone has been accounted for following a natural gas pipeline explosion in Lincoln County early this morning.

The explosion killed one and injured five; initially, it was unclear how many others may have been hurt or killed by the explosion, which rocked the Indian Camp subdivision off of U.S. 127 in the Moreland area around 1:20 a.m. Authorities asked everyone from the area to head to New Hope Baptist Church to be accounted for.

Around 10:30 a.m. Thursday, everyone had been accounted for, said Trish O’Quin, deputy emergency management director for Lincoln County.

“The main thing is everybody is accounted for. We did have the one fatality,” O’Quin said.

Hopefully, the five injured by the massive blast will recover, she added.

“As of right now, everything seems to be stable. We have not got any more missing people,” she said.

A stretch of U.S. 127 is shut down while first responders continue to work the scene and gas company representatives investigate their pipelines, O’Quin said.

“Hopefully, we’ll get this wrapped up in the next few hours for the people here, but it’s going to be an ongoing (investigation) for a while,” she said.

Everyone is being asked to continue avoiding the area for now. The Red Cross is providing food, water and blankets for those evacuated from their homes and first responders at New Hope Baptist Church, at the intersection of U.S. 127 and Ky. 1194, O’Quinn said.

Fighting the multiple fires caused by the explosion was tough on the firefighters — “we’ve had to keep rotating,” O’Quin said. “They get very hot. It was a very hot situation, especially at the beginning.”

O’Quin said Lincoln County is fortunate to have good working relationships with neighboring counties and cities. Numerous other first-responder agencies also responded to help, and Russell County sent two EMS ambulance crews to cover Lincoln County EMS needs while local responders were at the scene of the explosion, she said.

“This is why we do our mass-casualty drills, to get everybody working together,” she said. “… When something does happen, it really does pay off in an instance like this. You’re not meeting a stranger, you’re working together with a friend.”

There are no active fires remaining in the area, but firefighters are continue to watch for and put out hot spots, O’Quin said. It will likely be at least three to four more hours before U.S. 127 can be reopened.

After fatal pipeline explosion, police ask residents to go to church to be accounted for

UPDATE: Officials say five to seven people are unaccounted for in the area of the explosion. Police are asking that... read more