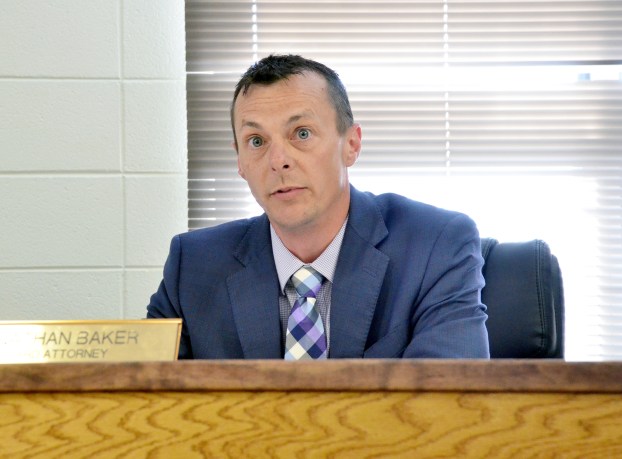 STANFORD — A large crowd filled the meeting room at the Lincoln County Board of Education Student Support Center last Thursday night, with many concerned parents awaiting the ruling on an appeal concerning the mandatory implementation of the Summit Learning platform at Lincoln County Middle School.

Thursday’s ruling by the Lincoln County School Board that the LCMS Site-Based Decision Making Council was within its authority to implement the Summit Learning program at the school in 2019-20 did not quell the anger and dissatisfaction that has been voiced by parents.

On June 11, Anthony Potts, a Lincoln County parent, brought his formal appeal to the mandatory implementation of the web-based program to the Board. Last Thursday, June 20, in a special-called meeting, Board Attorney Jonathan Baker spoke on behalf of the Board announcing that it affirmed that the curriculum decision rested on the council.

It did not take long for the ruling to draw an angry response, with a post popping up on the “Lincoln County Parents and Teachers Against Summit Learning” facebook page at 6:11 p.m., just moments after the ruling was announced.

“Disgust and disappointment,” the post began. “Those are the feelings after tonight’s meeting where the Board has decided to hand the decision back to the SBDM council regarding Summit Learning. We have elected positions for a reason – to represent our districts … for checks and balances … for accountability. Such an upsetting and passive response from our Board.”

The Board adjourned for executive session before announcing its findings and, once re-adjourned, Baker addressed the crowd in attendance.

“The board, pursuant to local policy, had to make the following two decisions; one, does the action fall within statutory authority of the council or, two, within the authority of the board,” he began. “In reviewing the statutes in case law KRS 160.345(2)(g) and KRS 160.345(3)(5)(i), along with the opinion from the Supreme Court (of Kentucky) Board of Education Boone County v Bushee, the Board finds that the decision on what learning platform to be best used at the school is within the authority of the site-based decision making council.”

In KRS 160.345(2)(g), it begins, “The school council shall determine which textbooks, instructional materials, and student support services shall be provided in the school.” KRS 160.345(3)(5)(i) states, “The school council shall adopt a policy to be implemented by the principal in the following additional areas: 1) Determination of curriculum, including needs assessment, curriculum development and responsibilities under KRS 158.6453(19); … 6) Planning and resolution of issues regarding instructional practices.” In the Supreme Court ruling it states, “The boards are responsible for the administrative functions of allocating funding, managing school property …. The councils are responsible for the site based issues, including, but not limited to, determining curriculum, planning instructional practices …”

The appeal ruling had two components, with the Board determining more than whether the SBDM council had the authority to decide on curriculum.

“The next decision the board was to make was, did the decision raise liability or health and safety concerns, exceed budgetary limitations, conflict with contractual obligations or was unlawful under state or federal laws,” said Baker. “The board found that there was not sufficient evidence that the site-based decision making council’s decision raised liability or health or safety concerns, exceeded budgetary limitations or conflicts with contractual obligations, however, did have concerns regarding the open meetings act with the letter in which the appealee was provided was dated prior to the meeting, which was held on April 16, 2019.”

“Pursuant to the local policy, the board affirms the vote of the site-based decision making council for the implementation of the Summit Learning platform as voted in the March 19, 2019, meeting, however, due to the concerns regarding the process being followed on the appeal and the open meetings act, is referring this matter back to the site-based decision making council to hold a meeting to address the appeal that was provided.”

After the findings were read, Board chairman Tom Blankenship asked for a motion to approve the findings. Following the motion and a second, all five Board members, Alan Hubble, Ethan Jones, Ricky Lane, Win Smith and Blankenship all voted yes.

According to the Summit Learning website, the program was developed by teachers to “help students connect their long-term goals to their daily actions” and that students “move at their own pace to learn skills, apply those skills to real-world projects and reflect on their learning.” Among the complaints of the online program, which is free, are that the learning platform requires too much computer screen time, it makes it easy to cheat by looking up answers online, teachers are not dedicating enough classroom instruction and that it invades student privacy.

In his appeal to the board on June 11, Potts made it clear that he wasn’t asking for Summit Learning to be done away with, just that it be made voluntary.

“All I’m asking for is the option, as a parent, to make the decision whether Summit would work for my child. Whether I am willing to sacrifice my child’s personal data and my child’s privacy to use Summit,” Potts said. “There may be parents who feel that Summit is right for their child. That is their right. What I am asking for is the right to determine if Summit is right for my child.”

There is currently a petition on change.org to “Make Summit Voluntary.”

Volunteers needed to bring Cow Bell Days back in 2020

STANFORD — To anyone who lamented the absence of the popular Cow Bell Days festival this past weekend and the... read more