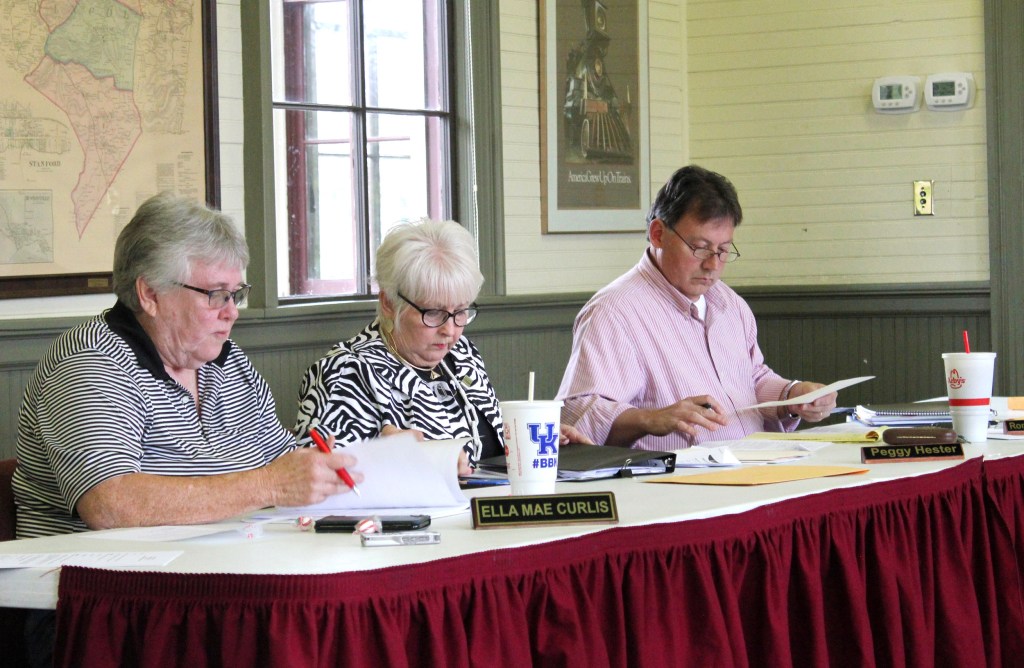 Photo by Abigail Whitehouse MEMBERS of the Stanford City Council look over documents regarding the system billing issue at Republic Services.

STANFORD – Stanford residents and customers of Republic Services’ trash pick up services will receive a condensed bill in mid-April due to a technical error with the company’s billing system.

Greg Butler, a representative from Republic Services, attended last week’s Stanford City Council meeting to update the city on the billing error and what to expect moving forward.

“As you probably have noticed, you have not received a bill,” Butler said. “…There were some technical issues with the billing transition process…Neither system communicated with the other and so no bills went out.”

Butler said the company is working on the issue now.

“The expectation is that the next bill will come out April 20 and that will cover a period of January through June,” he said.

For the standard residential customer, the monthly charge is $13.95 which means the April 20 bill will be about $83.70.

“The second part of this, we’ve always anticipated, is that we’re going to have folks that we are billing, because we’re getting information from the water department, or maybe they feel differently about how it should be billed,” he said. “I think the most common example would be landowners that were billed through the water company and maybe they want their tenants to have the trash service.”

Butler said the company is ready to handle those calls.

The customer service center is up and running, he added.

“I have a list of all of the new account members, which I can share with the city and we can sort of go over and make sure that there’s no obvious errors,” he said. “We’ve taken care of the Housing Authority, as an example, they wanted to be billed as a group…there may be others that we’re just not aware of in the community and so hopefully we can get those taken care of before these invoices go out.”

As far as the service itself, Butler said there haven’t been any issues.

“Folks are getting their trash picked up on a consistent basis,” he said.

After April 20, the monthly billing will resume.

Some City Council members expressed concerns about billing those on fixed incomes for multiple months at a time.

“I think you’re going to get a lot of complaints,” said Council member Peggy Hester. “When you stick that on the water bill, and it’s an $83 increase, I’m going to refer people who call me to your customer service number.”

Council member Ronnie Deatherage said it may be hard for some to come up with $83 as opposed to $13.95.

“…Not everybody will be able to have put back $15 a month to pay that bill,” said Council member Dalton Miller.

Butler said the company’s standard practice is to work with anybody.

“We recognize that waste is a public service, it has to be done, and eventually somebody has to pay for it to be done. So it’s not abnormal at all for our customer service folks to deal with these issues,” Butler said.

Sara Givens, City Council member, asked if services will be cut off for those who can’t afford the larger bill.

“If they call us, we’ll work with them,” Butler said. “If they don’t call and they don’t pay and they just say, ‘I’m not paying this’ and throw it away, they’ll be cut off.”

Mayor Scottie Ernst said the city had previously dealt with the issue of customers calling the customer service line and being referred back to City Hall. Butler said that issue should now be resolved.

“That’s the piece that should be turned on at this point,” he said.