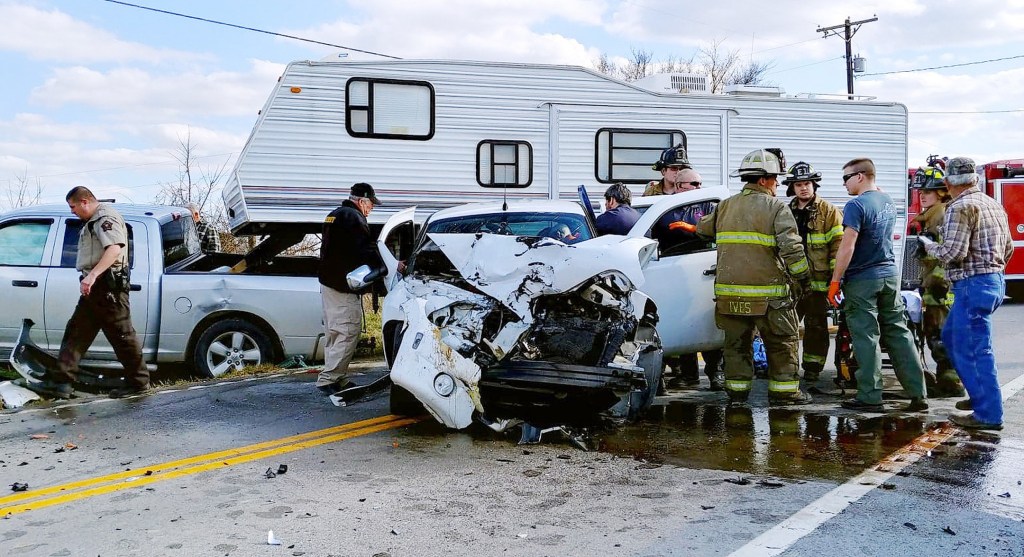 Photo by Abigail Whitehouse Both lanes of Highway 39 at the intersection of Preachersville Road were blocked off last Wednesday after a car and a pickup truck collided.

STANFORD — A Crab Orchard man was airlifted to a Lexington hospital with severe injuries last week following a two-vehicle collision in Lincoln County.

According to Sheriff’s Deputy Michael Mullins, Marshall Brown Scott II was traveling southbound on Hwy. 39 on Feb. 27, heading toward Crab Orchard, when his vehicle collided with a Dodge pickup truck pulling a camper that had turned off of Preachersville Road and onto Hwy. 39.

Mullins said an accident reconstruction showed the white car, driven by Scott, left about 296 feet of skid marks on the road before hitting the truck and camper in the northbound lane.

“I don’t know what caused him (Scott) to drop off the road and over-correct, but you could tell he locked his brakes up,” Mullins said. “The collision actually occurred in the truck’s lane, in the northbound lane.”

Mullins said this week that alcohol could be a factor in the collision and blood results are pending at this time.

The driver of the pickup truck attempted to lessen the impact by driving forward and into the ditch, Mullins said.

While the two occupants in the truck were not injured, Scott sustained severe head injuries, Mullins said. He was flown by helicopter to the University of Kentucky Hospital in Lexington.

According to his brother, he sustained several fractured vertebrae and ribs. His left shoulder was also fractured and three large cuts required more than 28 stitches.

As of Thursday last week, the day after the collision, Scott was able to eat and drink and was expected to be home after two-to-three days. He will have to wear a neck brace for six-to-12 weeks, according to his brother.

“He is very lucky considering the way the car looks, and not wearing his seat belt,” John Scott said.

It’s a situation he’s never been in before, but the response from the community and people he knows has been a comfort to John Scott.

“I’ve never been in this situation with having a family member in a wreck like this, but the genuine concern from all kinds of people is humbling,” he said.