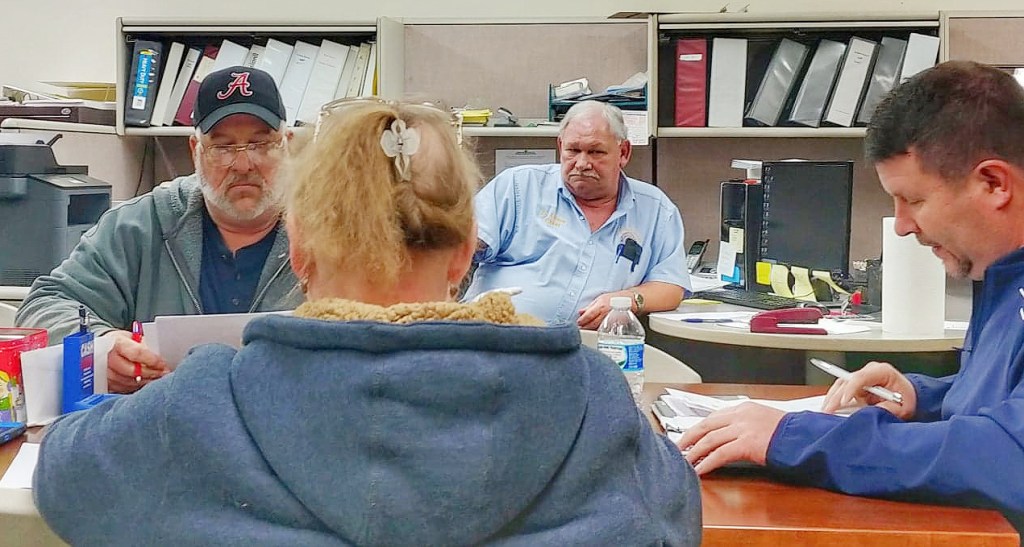 Photo by Abigail Whitehouse Members of the Lincoln County Fire District board gather for their monthly meeting Monday night at Fire Station 2.

CRAB ORCHARD — The Lincoln County Fire Department is looking to increase its volunteer membership across the county, according to Fire Chief Danny Glass, who said numbers are at an “all-time low.”

“We’re at basically an all-time low, as far as membership in the county as a whole,” Glass said.

The fire department has seven stations in total placed throughout the county.

“Now that we’ve all merged, so to speak…technically we’ve always been one fire department, or one fire district, but the way we were set up at the state, they were all looked at as being independent fire departments. Now we’re truly all one,” Glass said.

Glass said he isn’t sure why some stations are having trouble attracting new members.

“I don’t know why, I guess parts of the area we have the older generation, so to speak, more farmers, less younger people that are interested,” he said. “We just can’t draw them.”

“I don’t know, we’ve got one of the best stations there is in the area here (station 2) but the people’s just not there,” he said.

Glass said if the department can increase membership in those weak areas, he will be able to send out an “all-call” so anyone can respond.

The board voted unanimously to increase membership by five people per station.

The department’s Junior Firefighter Program has helped keep membership numbers up in the past, according to the program’s coordinator Sean Reardon.

Reardon, who was a junior firefighter himself, said the program is a great way for young adults to serve their community at a younger age and for parents, it can be a great way to keep their kids out of trouble.

“I think, on parents’ behalf, it’s a good thing to try to get their kids to join the program because it will obviously keep them out of trouble and keep them involved in something that will keep them on a straight and narrow (path),” he said. “The state fire commission’s requirements for the program is they have to maintain at least a C grade average in school, so obviously it’s going to make your kids work harder for school.”

In the long run, the junior program can turn out to be a good career, he added.

While there are some limitations to what Junior Firefighters can do, there are many opportunities for learning and experience, according to Reardon.

In addition to being able to earn multiple certifications, Juniors can now ride along on calls and participate on scene in a limited capacity, he said.

SO YOU KNOW
Anyone interested in the Junior Firefighter Program can contact Captain Sean Reardon at (606)-669-5916 or sreardon@lincolncountyfiredepartment.com. The program is open to ages 15 to 18.

Anyone 18 years or older interested in joining the Lincoln County Fire Department can also contact Reardon and he will put them in touch with their local fire station.