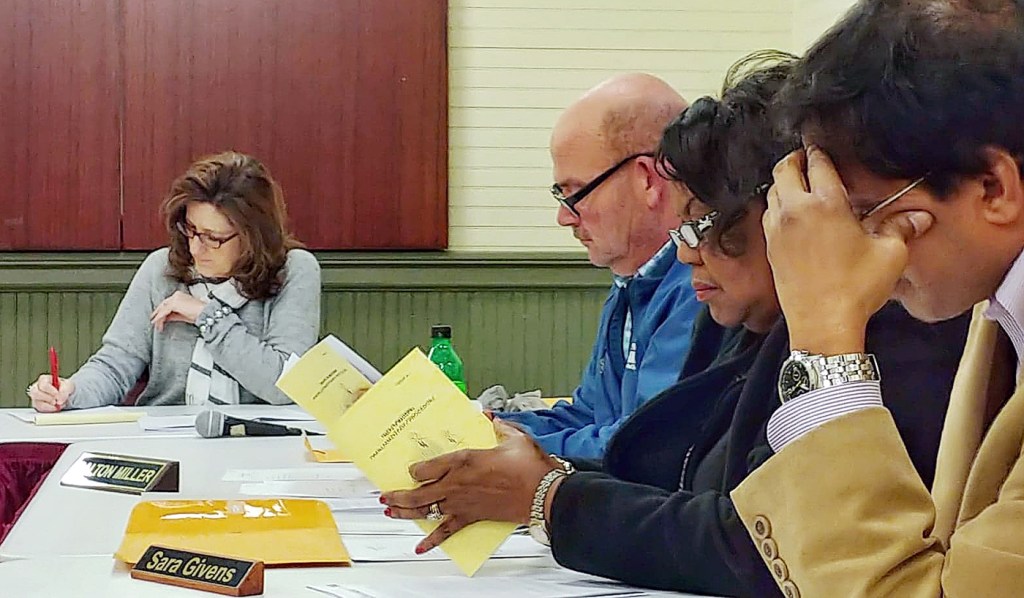 STANFORD — Organized agendas and discussions and less-lengthy meetings were just a few of the goals that newly-elected Stanford Mayor Scottie Ernst and city council members agreed would be beneficial moving forward.

The new mayor and council members met last Thursday for their first regular-scheduled meeting and discussed many goals and ways to improve the city in the next few years.

“I want to try to keep meetings in an orderly fashion and keep them going in a fashion that’s to the point,” Ernst said Thursday.

City Council member Naren James requested that council members be able to submit items for the meeting agendas “this time around.”

Ernst agreed and said if council members want to submit items to be printed on the regular meeting agenda, they would need to do so by Tuesday night at the latest.

Peggy Hester, a returning City Council woman, also requested that the item “Citizens Comments” that appears on every meeting agenda, be moved to the top of the agenda so that the public is not waiting too long to speak.

Ernst said “Council Comments” will also be added to every agenda in the future.

Newly elected City Council member Ella Curlis suggested bringing the Stanford Council up to date with technology by equipping them with IPADS or similar devices, so research on city ordinances and laws can be done in real time during meetings.

“I was going to talk to Hadden. I am looking into see what Hadden can do for us, also going to see what Bluegrass AD…talk to those folks. They have different services that they can offer. Also, the Kentucky League of Cities has a company that they recommend for website, email addresses, cyber security,” Ernst said. “We don’t have any cyber security on our website.”

In his first week of office, Ernst said he drove around the city and looked at the street conditions in town.

“There are about 11 potholes that he’s going to repair with cold patch,” Ernst said. Hester asked to add two potholes to the list, one at the entrance to Harmon Heights off Danville Avenue and one on Lancaster Street.

Ernst said they cannot blacktop the potholes until warmer weather returns but a cold patch will be used temporarily.

“The blacktop plant quit in November and won’t reopen until about April so the best we can do is cold patch,” he said.

Newly elected council member Dalton Miller also created a list of street lights that are currently out in the city.

“Those have been out for a long time. believe me I’ve seen them every time at the council meeting. So we’ll see what we can do about getting those things burning again because I think Dalton figured up it’s costing the city about $500 a month in lights that are not working,” Ernst said.

City Council member Ronnie Deatherage and Hester also both discussed several areas in the city that are causing some flooding issues.

With a new mayor, comes the appointments of non-elected officials such as the city clerk, city attorney and Chief of Police. Hester requested Ernst share his recommended appointments.

“Any unelected official employee has to be approved by the council,” Hester reminded the City Council.

“I have asked John Hackley to be the City Attorney and he has accepted that. He will do it at $1,000 a month and $100 an hour for additional litigation,” Ernst said. Hackley could not be at the January meeting due to a family emergency, Ernst added.

“In fairness to the attorney, though, I have to say, if we belabor the attorney multiple times and all of us call in and he spends a lot of time, I just think as a fellow professional I’m sympathetic with his position that if we extend his time…,” James said.

Hester said hopefully the City Council will be more organized under the new administration and won’t have to over-extend the City Attorney.

Local resident Larry Nunemaker suggested the city create a monthly expense report to show the public how much extra is being paid to the City Attorney and the work related to the payment.

Until the City Council has approved the appointment, Hackley will serve as interim City Attorney, Ernst said.

“We need to formalize it at the next meeting,” James said. “I have great confidence in John (Hackley). He has great experience.”

As far as the next City Clerk, Ernst said he would like to reappoint Jone Allen, who was appointed at the end of last year.

“I have expressed that I would like to see two clerks in the office. We’ve had five part-time ladies in the past and there’s still the need for two clerks,” Ernst said. “I understand there may be some opposition between maybe some of you council members who feel like we possibly don’t need two clerks, or if we do get two clerks, how would it be paid for and what would that position be.”

Ernst said he would like to have a clerk and treasurer to split the duties.

“I’m working on that at the present time,” he said. “Jone is our clerk, she’s been very helpful to me. At this point I’m weighing all odds and looking into it before we bringing it before the council.”

Having several part-time clerks made conducting business at City Hall difficult over the last few years, Ernst said, and he’s trying to correct that.

Deatherage and Hester expressed concern with the cost of hiring two full-time clerks. Miller said the city has never compared it’s tax rolls to the county to see what delinquent taxes haven’t been collected – which could be a potential area of revenue for the city and a job duty for a new position, if created. The City Clerk added that she doesn’t believe the city’s delinquent property taxes have ever been collected either.

“I think we have to be careful that if we make changes, that we look at the budgetary impact across the city,” James said. “I’ll be more supportive of designating someone as a treasurer. I don’t think we need two clerks.”

The City Council would first have to create the position then vote on the salary.

“We need to do a little leg work. Make the rationale to us why we need it,” James said. “…There may be some revenue potential, like he (Dalton Miller) said, if we can recover some money that’s being lost, that’s fine. But like Ronnie and others, I couldn’t see us supporting two full-time clerks with benefits.”

Ernst said he would bring more information to the City Council next month.

• Approved the first-reading of a finalization ordinance for the annexation of South U.S. 27. The council met again Tuesday, Jan. 8 to pass the second-reading of the ordinance.

• Discussed creating a rotating police fleet of cruisers to keep updated vehicles in use.

• Appointed William Stafford to represent the City of Stanford on the Lincoln County Ambulance Board. The council also appointed Dana Curlis Moore to the Ambulance Board, as a replacement of Patrick Denham, who is stepping down.

• Heard from resident Larry Nunemaker who recommended setting aside a separate budget for house condemnation for Code Enforcement. Currently money received or collected through Code Enforcement goes into the general fund.