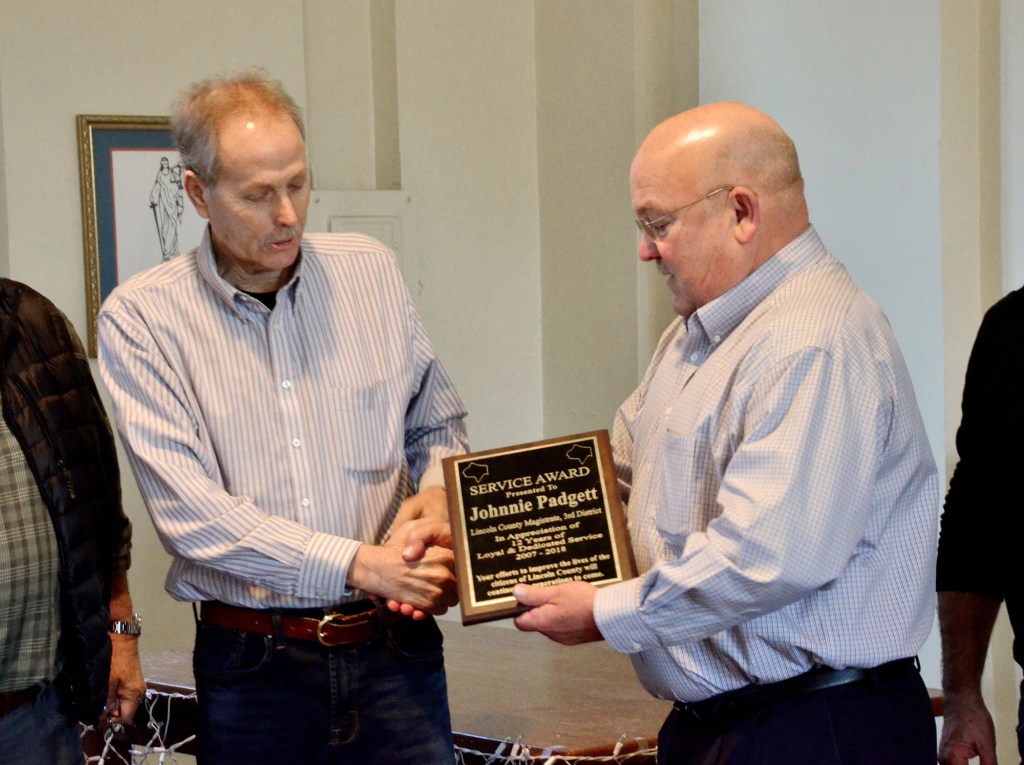 STANFORD — This week’s meeting of the Lincoln County Fiscal Court was unlike any other during 2018.

District 3 Magistrate Johnnie Padgett, who has served on the fiscal court since 2007, cast his final votes Tuesday morning after serving three terms on the court.

Before the court adjourned, Adams took time to recognize Padgett and his service on the court.

“I know this is not on the agenda, but we’ve got one of our court members that this is his last meeting with us. And we have a little token of our appreciation,” Adams said. “This Service Award is being presented to you in appreciation of 12 years of loyal and dedicated service. Your efforts to improve the lives of the citizens of Lincoln County will continue for generations to come.”

And with the presentation of the award by Adams and magistrates David Faulkner, Lonnie Pruitt and Joe Stanley, Padgett gave a nod and a small wave to those in attendance.

In other business, the court addressed the issue of filling a position on the Fire Board after the resignation of a firefighter member. The item had come up in the previous meeting, with Bill Briggs presented as a nominee for the position but it was tabled after a second person’s name, Shane Yocum, was mentioned as showing an interest in the position.

Lincoln County Fire Chief Danny Glass was on hand to elaborate on the issue Tuesday.

“First, kind of give us an education about the different positions on the board,” Adams said. “I know you have appointed positions and elected positions.”

“You have seven positions on the Fire Board, three appointed by fiscal court, two elected by property owners and two elected by firefighters,” Glass answered. “The position they currently have opened is where a firefighter has resigned. Technically, according to Chapter 75, anytime there is an open position it is filled by the judge and the fiscal court.”

Glass stated that, while the fiscal court fills the position, the Fire Board is allowed to make a recommendation of someone to fill the position.

“The board has in their bylaws a section that they make a recommendation to the fiscal court as to who should fill those positions. It doesn’t say you have to acknowledge them or not,” said Glass. “In doing so, they gave me two names to bring to the judge, which were Bill Briggs and Billy Goodin. That’s pretty much where we are at. Both of those are active volunteer firefighters.”

District 4 Magistrate Stanley was the person who mentioned that another person was interested when Bill Briggs was initially offered as the recommended firefighter.

“One person has called me and that’s Shane Yocum. Is he a man that would qualify for this position,” Stanley questioned.

“As far as knowledge and fire experience, yes,” Glass said. “But, as far as we know, for the last two years he’s not participated in any training whatsoever. However, he has taught two classes in state of Kentucky for which he’s received benefits for.”

“Every station came up with a name for recommendation and all were looked at and we chose two names and Shane’s name was not included in that.”

No action was taken.

The fiscal court did approve a budget amendment for Lincoln County Clerk George “Sonny” Spoonamore IV. Spoonamore said that line 41 on his budget, which was for training incentive (40 hours training per year), was omitted.

* Reserved for transfer of $5,500 to election printing.

*Reserved for transfer of $7,000 to Judicial Center improvements.

*Reserved for transfer $50,000 to retirement for Clerks office.