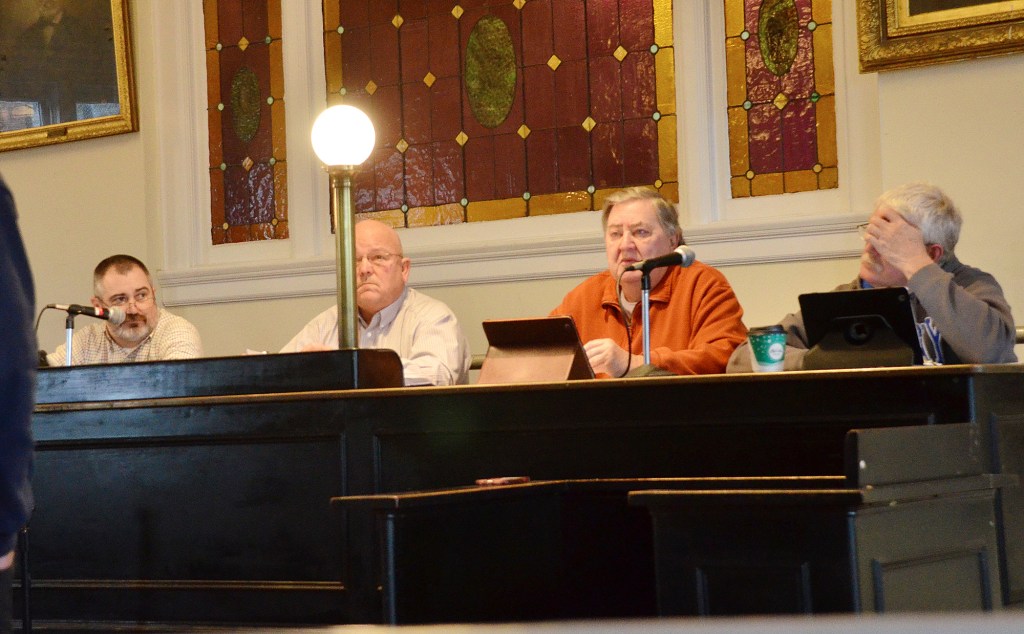 STANFORD — At its latest meeting, the Lincoln County Fiscal Court addressed several issues of interest under new business, including the second reading of industrial revenue bonds, approval of the 2019 budget for the Sheriff’s Department and an update on 911 addressing.

The court approved the second reading of an ordinance to issue industrial revenue bonds to Kentucky Fresh Harvest, LLC, to finance an industrial building project (greenhouses) off Foster Lane and Old Fort Road in Stanford.

After the first reading of the ordinance on Nov. 13, some questions arose on the county’s bonding capacity.

Judge-Executive Jim W. Adams Jr. reiterated that the industrial bond issue “by no means affects our bonding capacity, as Daryl (Day – County Attorney) had mentioned in our last meeting. What this does in reality, is it forgives the property tax, except for the school tax. It is payment in lieu of taxes. The schools do not lose any money because of these industrial revenue bonds.”

“There are a couple different types of bonding capacity the county has,” he said. “One is, it has what’s called a general obligation bond limit. That’s how much debt you can issue. That’s really reserved for debt that’s backed by your taxing power. That’s a state constitutional and statutory limit. These bonds are not backed by your taxing power. It’s exactly the opposite. They are not payable with any revenue of the county’s so they do not impact that limitation at all.”

“The other limitations are imposed by the federal income tax code. And those limitations apply if the bonds provide, basically, a lower interest rate for certain types of tax exempt financings that you can have through a county. That’s not the purpose of this financing either, so those limits are not impacted because the interest on these bonds are taxable for the purpose of income taxes so none of those limits are implicated either. So this bond has no impact on the county’s bonding capacity in any way, shape or form.”

There would be another clarification on the bond issue Tuesday, with Day correcting a statement he made previously on the property in question.

“In interest of full disclosure, I didn’t realize this and I had told you all you are going to have a deed to this property. However, there is one little catch to that,” Day said. “There is a mortgage on this property and you are taking this deed subject to that mortgage because there will not be enough in this bond to pay the entire mortgage off. So, you will have a piece of property where there is a bank or a lending group that will have the first lien on that property when all this is complete.”

Magistrate Joe Stanley voiced concern that the county could be liable if the deal goes south.

“You will get named if this all goes south and the bank decides to foreclose on the mortgage,” Day said. “Lincoln County Fiscal Court and you all, as magistrates and judge executive, you will be named in that because you have title to it. In my opinion, there cannot be a judgement taken against the county for anything other than the sale of the property because the title is what’s in their name. They cannot come in and garnish the county’s bank account. They cannot come in and garnish taxes out of the sheriff’s drawer. You’re holding a legal title.”

Kathy Caudill presented the Lincoln County Sheriff’s Budget for 2019 to the court.

“We’re running about $60,000 more than last year because we added a new deputy, fuel increased,” she said. “We’re asking for $165,000 in advancement this year so maybe we won’t have to borrow from you at the end of the year.”

Adams asked Sheriff Curt Folger if his department could absorb the cost of the additional deputy, to which Caudill said, “We think we can.” He then asked if the department was still paying the deputy under indictment (Brandon McIntosh).

“Right now we are,” said Folger. “That money is coming from c-time (comp) of other deputies. They’re giving him their time to help him through this.”
Caudill said the budget included keeping him and adding a new deputy.

When asked if the new deputy would cut down on comp time and overtime, Folger answered in the affirmative.

“Yes, it’s going to give us another guy there so that, whenever some of our deputies do have a little bit of overtime, we can adjust it off and not leave us hanging out there with only one deputy working at night,” he said.

Before the court voted, Magistrate David Faulkner said he felt that the budget was up to Folger’s discretion.

“I was asked how I felt about it and, I’ll be honest with you, I think it ought to be left up to the Sheriff. He’s elected to run the office. If he can come up with the money, that’s up to him. I make the motion we approve the budget,” he said.
Stanley seconded and the budget was passed.

Lincoln County Clerk Sonny Spoonamore asked for an amendment to his current budget in the amount of $7,900 for a part-time employee and a one-time pay raise.

“I hired another lady part-time because I have a lady fixing to retire. When she retires, this girl will be good to go,” Spoonamore said. “It’s a lot to learn and she’s ready.”

The amendment was approved.

Russ Clark of Bluegrass 911 updated the court on a grant application.

“If you remember, I came earlier this year and asked about applying for a grant to correct some of the addressing issues in the county. We were awarded that grant,” he said. “We’re starting to work on that and currently we are identifying the areas we are going to have to do some work in. I will be coming back at a later date with some information on changes that are going to be made.”

“It’s not just Lincoln County,” he added. “It’s going to be statewide because the state is trying to do a Next Gen 911 and it’s coming down to more precise addressing according to GPS coordinates. I’m on a committee in Frankfort and we’re working on it now. That’s setting the standard for statewide stuff. Theoretically there could be an address for every 5.28 feet.There’s a lot of things we’re going to have to look at.”

In other business, the court addressed the following issues:

* Approved resolution to ask the legislature to act upon funding that supports Kentucky Transportation Funding Mechanisms.
Tabled appointing a new member to the Lincoln County Fire Protection District Board after the resignation of a firefighter. Bill Briggs of Broughtontown had been recommended by Fire Chief Danny Glass but then others were named who voiced interest in in sitting on the board.

Adams said there would probably be another resignation from the Fire Board because of lack of attendance, saying they are having a hard time getting a quorum.

“We don’t know who may or may not be interested out there,” said Faulkner. “If people know there might be an opening they might be interested in serving. Sometimes I don’t think we advertise these openings on the boards enough. To get new blood, new interest.”

“I’ll second,” said Stanley. “It’s good that people are interested. A lot of times it’s hard to get people to serve. If 2-3 people are, it’s a plus for us.”

* Approved a one-time pay increase from $25 to $35 for the Nuisance Board. They meet once a month, 11 months of the year. The approval was retroactive to Nov. 26 meeting.