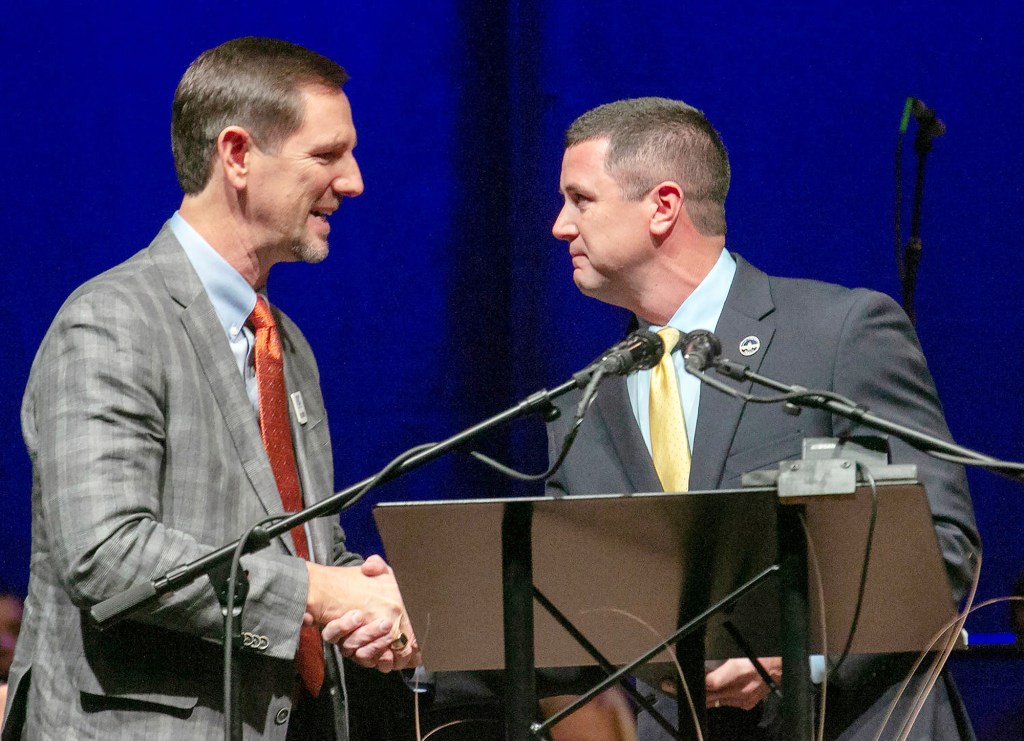 FRANKFORT– Rep. David Meade of Stanford has been awarded the Guardian of Life award by the Kentucky Baptist Convention for his work on the transformative adoption and foster care reforms passed during the 2018 session.

Meade was the primary author of House Bill 1, a comprehensive effort to place children into loving homes in a timely manner and improve child welfare as a whole. He was presented the award by Paul Chitwood, Executive Director of the Kentucky Baptist Convention, on Tuesday, November 13 in Pikeville at the organization’s annual meeting.

“It’s important to recognize and honor those who take initiative to fix that which is broken, and Kentucky’s foster care system was terribly broken,” Chitwood said. “Rep. Meade worked tirelessly to reform the system on behalf of helpless children who, through no fault of their own, found themselves languishing in a bureaucratic quagmire. On behalf of hundreds of thousands of pro-life Southern Baptists in Kentucky, we say thank you for what you have done.”

As an adoptive father, Meade is well-versed in Kentucky’s outdated child welfare structure, which has far too often failed to account for what is best for the child involved.

“As both a lawmaker, father, and pro-life advocate, I have always had my eye on ways to truly make a positive impact for Kentucky’s children and families,” said Meade, who serves as Majority Caucus Chairman in the Kentucky House of Representatives. “The need for action has never been greater, as a record number of children currently reside in state custody and the opioid epidemic continues to drive families apart. House Bill 1 is the result of months of hard work by many different people, and I was honored to play a role in the effort to significantly improve child welfare in the Commonwealth.”

Once fully implemented, HB 1 will make it easier to place children into loving homes by mandating stricter timelines for courts to place children as well as removing bureaucratic barriers to finding children their permanent home. Among other improvements to child welfare, the legislation also takes action to better protect infants struggling from drug addiction due to their birth mother abusing controlled substances.

Meade also serves as co-chairman of the Child Welfare Oversight and Advisory Committee, which meets monthly and was formed as a result of House Bill 1 to improve oversight of Kentucky’s most vulnerable children.