Fiscal court to study disparity in use of towing & recovery services 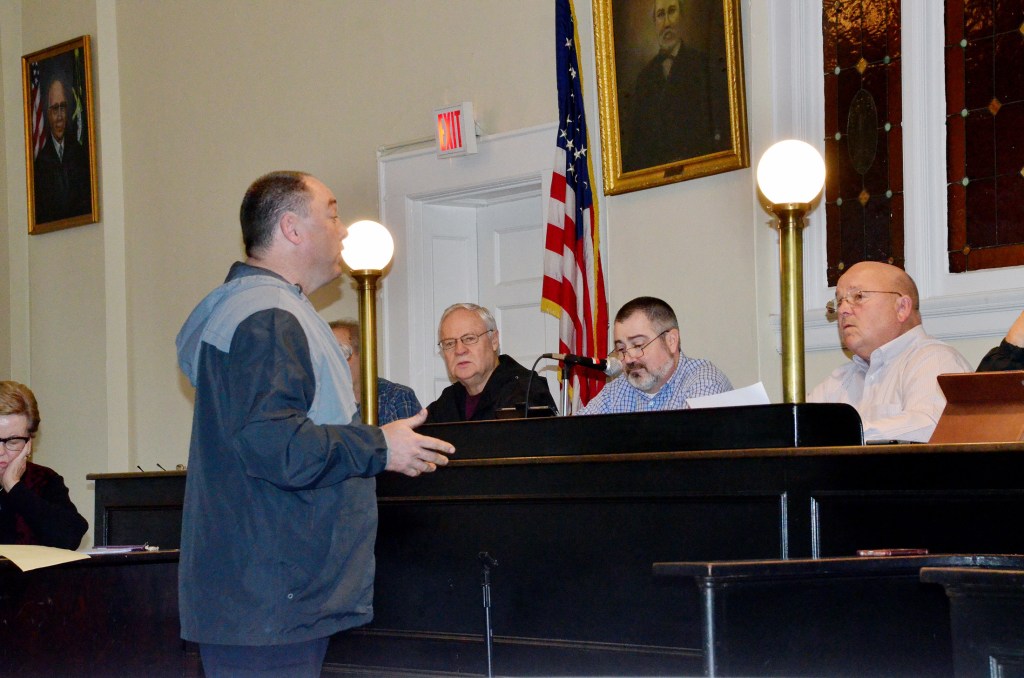 Photo by Nancy Leedy TERRY BULLOCK, owner of Bullock's Garage in Waynesburg, addresses the Lincoln County Fiscal Court on his concerns of how towing business is allotted following accidents and impoundments.

STANFORD — When vehicles are involved in accidents or are impounded for various reasons, a towing service soon shows up to haul said vehicles away.

But just who is making the calls to towing services?

That was the question posed by Magistrate David Faulkner after Terry Bullock, owner of Bullock’s Garage in Waynesburg, addressed the Lincoln County Fiscal Court on his being overlooked on possible towing business in his area.

“Well, I think it’s 911,” Bullock said. “Sometimes we have a lot of locals, firefighters maybe, and our local constables making the calls. I don’t think it’s anything with our sheriff’s department. Theirs all go through the 911 system.”

Lincoln County Sheriff Curt Folger also weighed in on the question of who makes calls.

“We advise them (911) to make calls,” he said. “Our number one goal is to clear the road as quick as possible. Constables make calls sometimes.”

Bullock called into question the disparity in how towing services are called after losing several business opportunities over the past few years.

“I run an automotive shop and for years it’s been an ongoing problem of people not in our county, not paying our taxes and things of that nature getting our business. That happens a lot,” he said. “I’m in the business to make money. I want to be fair, but in the southern part of the county this has been a problem. I can’t speak for the rest of the county. I’m just speaking for southern Lincoln County because that’s where I’m from and what I see. I can’t speak of something I don’t see or know. I would just like to clean up the southern end of Lincoln County.”

Bullock used an example of a past accident involving Magistrate Johnnie Padgett’s brother to convey his issue.

“Johnnie’s brother wrecked, you remember that,” Bullock said pointing to Padgett. “I was the second person there and directed traffic. The fire department gets there. A volunteer firefighter shows up and sits there for about five minutes, and a towing service shows up before our local sheriff’s department has a chance to arrive. I said, ‘Guys, what’s going on? Seriously, I’m a mile up the road. Let’s get some details here.’ Their response was, ‘I was told that anything happens in Lincoln County, I give to a certain towing company.’ This towing company is not in Lincoln County. It’s in Science Hill.”

And that involves just one service. Bullock related that another towing service that is getting calls has no license at all. He questioned how they could be allowed to take his business when they weren’t even registered as a business.

Bullock’s frustration with the current towing “call” system was further heightened when he related an incident that happened close to his Waynesburg garage.

“We had an incident. We close at about 7 o’clock. We have a drug bust next to us at the Dollar Store. My guys are closing. We’re walking out the door. True story,” he said “I don’t get the call. I’m looking at it ..,.Why do I not get that call. I can throw a softball and hit that car.”

“Mike Mullins was on the scene. I really have no trouble with the guys sitting back there (Sheriff’s Office). Where I have my trouble is my local constable.This might make some people mad but I can’t help it. I get mad when talking about business. The guy that made the call at the Dollar Store was the constable. Who he called was his family.”

“I understand if an accident happens right in front of a business or in a certain area,” said Bullock. “If there’s a wreck in Hustonville, don’t call me. I can’t get there quick enough. You could be loaded and gone by the time I get there. I’d just like to figure out a common rotation.”

Day suggested that Lincoln County might consider establishing a policy like that held in Garrard County to alleviate the problem related to the fair allotment of towing business.

“Garrard County established a policy on this requiring a rotational basis,” Day said. “Individuals wanting to use a specific or different service have to make the call themselves. All wrecker services must pay a registration fee, a Bluegrass 911 fee and they have to meet occupational tax requirements. Those not complying would be taken off the rotation.”

“That puts people on a level playing field. It provides a peace of mind for people.”

Day and Adams agreed to look further into the towing issue before the next meeting and the court placed the topic on the Nov. 27 agenda.
Bullock said he plans to attend the next fiscal court meeting to continue discussion on a possible solution.

“I’d like to go to a true rotation. It keeps us all honest. It’s no favoritism,” he said. “I’m trying to figure out what is a good common ground for everyone. Where I’m happy, the next guys happy. Everybody’s happy. If somebody can figure out a way, we have the same insurance, we have the same DOT inspections, where we’re on a level playing ground. I’m not going to spend $12,000 a year and someone else spends $500 a year and they’re still getting more than I’m getting. You just can’t stay in business like that.”