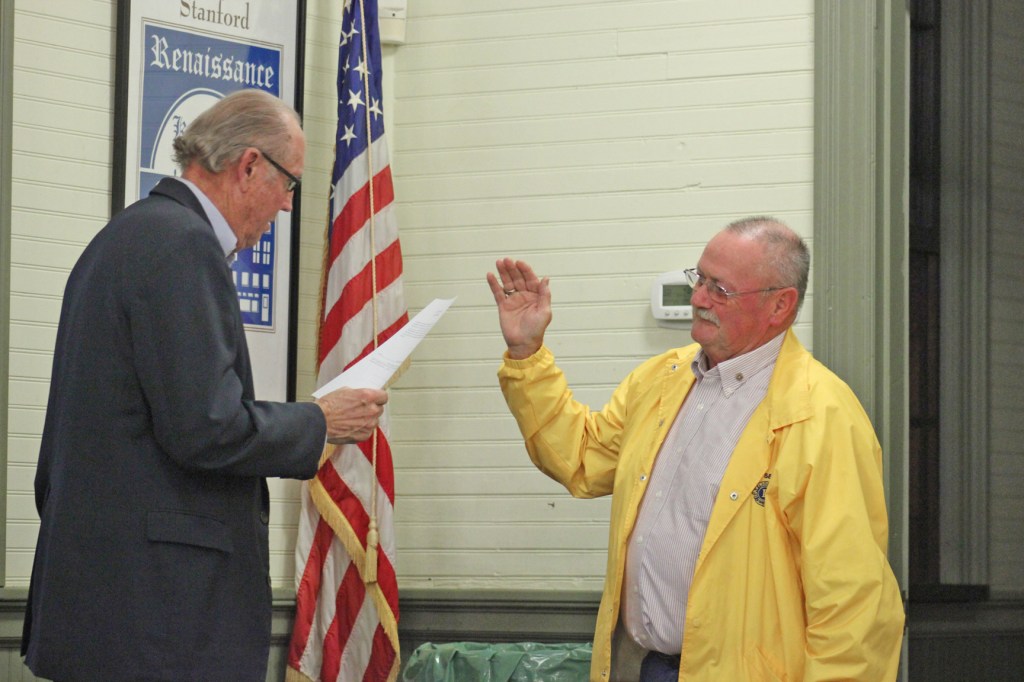 Photo by Abigail Whitehouse BOB SWETT is sworn in to serve the remainder of John Sallee's term for the Stanford City Council.

STANFORD — Stanford City Council members have approved the appointment of Bob Swett to finish out the term of former council member John Sallee Jr., who passed away in earlier this month.

The appointment was made during the City Council’s second public meeting held last Thursday night.

“We decided, well, just talking individually, not in any session together, that it’s best to just look at the last four years and see who was on the (2014) ballot,” said City Council member Naren James.

The seventh person on the last election’s ballot to receive the highest number of votes was Tom Moser, James said.

“I approached him first, he declined. His health is not the best, he said he’d prefer not…,” James said.

Swett, the next person on the ballot in terms of the amount of votes he received, said he would be willing to serve the remainder of Sallee’s term.

According to state law, the council has 30 days to appoint a replacement before the governor steps in to make the appointment.

The council unanimously approved Swett’s appointment and he was formally sworn in following the vote.

Swett will serve on the council until Dec. 31, when a new council is sworn in following the November election.

The minutes from the Sept. 6 meeting were brought into question by Council member Peggy Hester, who said they did not reflect what happened during the meeting.

The Sept. 6 meeting was a contentious one that lasted several hours.

“This isn’t just my problem, the council people strongly agree with me,” Hester said.

The September meeting involved a local property owner, Tommy Owens, who requested a copy of a letter that was addressed to the City Council and written and signed by the members of the city’s Planning and Zoning Commission.

The letter addressed to the council discusses what the Planning and Zoning Commission believes are “numerous violations of the city zoning and nuisance ordinances which have been and continue to be violated within the city limits.”

Additionally, the commission wrote that it is concerned about a lack of follow through on condemnation actions and approximately 80 cars that appear to be inoperable and remain within city limits.

“Our concern became extreme when it was discovered that the city enforcement officer was being directed by the Mayor and City Attorney not to issue citations for these violations,” the letter reads.

The letter goes on to say the commission has also brought violations to the attention of the city attorney, mayor and enforcement officer regarding property adjoining Walmart, owned by Tommy Owens.

“It is the commissions concern that we will suffer reprisals by individuals that contend that they are being singled out for enforcement and that certain violations can be overlooked because of the violator involved,” the letter states.

Council members asked during the September meeting how Owens was made aware of the letter, before council members had even received a copy, but no clear answer was given.

Last Thursday night, Hester objected to one paragraph included in the previously-approved Sept. 6 minutes, saying she had video-evidence that contradicted it.

The original minutes stated, “City Attorney Chris Reed strongly advised that the letter should not be discussed in open meeting but rather in executive session. The question was raised about whether the letter was public record due to the fact that it was openly distributed. The decision was made to allow the letter to be given to Mr. Owens.”

“That’s not true, we have video of that meeting that very well shows what happened,” Hester said. “It is not true that Chris Reed strongly advised the letter should not be discussed in open meeting. That did not happen. I’ve got the video.”

Reed has since resigned from his position as Stanford’s City Attorney.

Acting City Attorney John Hackley said last Thursday if that is the recollection of the City Council, his recommendation would be to strike that portion of the minutes and approve the amended version.

Council member Ronnie Deatherage agreed with Hester and said no decision was made to allow the letter to be given to Owens.

“That entire paragraph is not true,” Hester said. “I don’t know how that made it into the permanent record but it needs to be out.”

City Clerk Jone Anderson said Reed asked her directly during the meeting to put that information in the minutes.

“Obviously, the fact that the letter was discussed, the letter was passed out, the gentleman (Owens) paraded around here and basically, you know, made his point, there could be no reference to an executive session. As far as I recall, the attorney handed it… This was an oversight on our part in passing the minutes, I agree with Peggy (Hester), we need to strike that out,” said Council member Naren James. “Unfortunately, in the future, I think your role as the clerk is to record what happened, not what somebody thinks should be recorded.”

The council unanimously approved an amended version of the minutes, striking the entire paragraph.