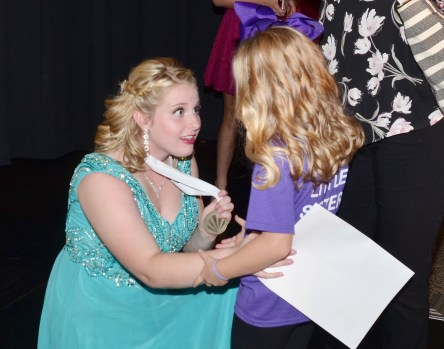 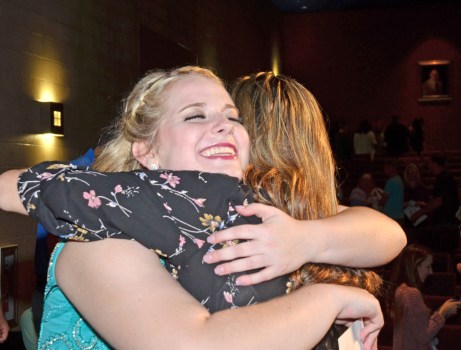 JESSIE WILSON gets a congratulatory hug from a well-wisher following her win in the 2019 Lincoln County Distinguished Young Woman Program Saturday at the Stuart Underwood Auditorium. 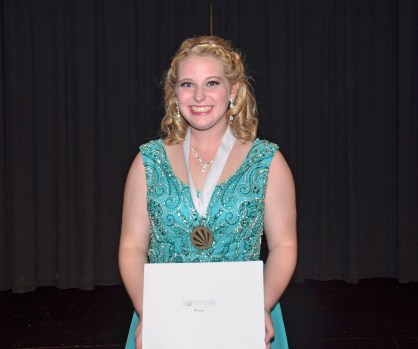 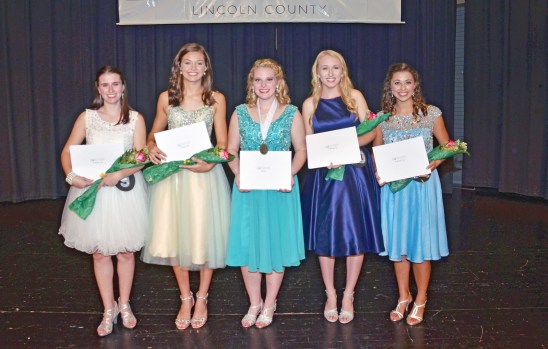 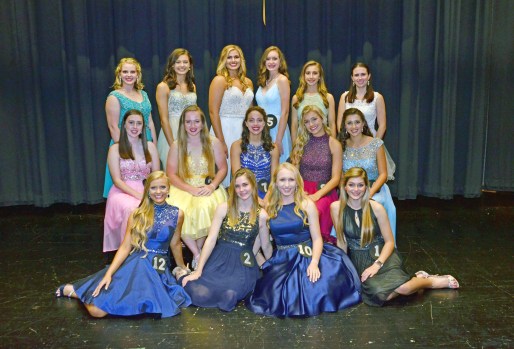 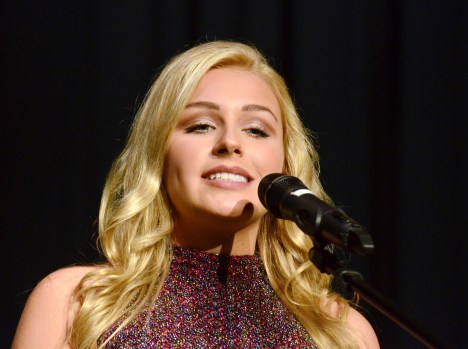 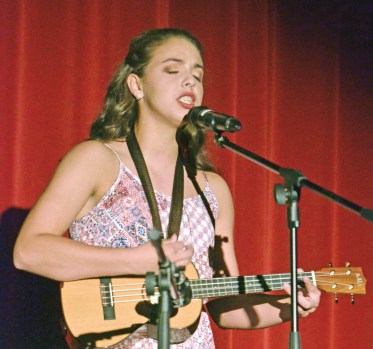 MADDY BOYLE is absorbed in her music as she performs a Southern Gospel medley for her talent presentation. 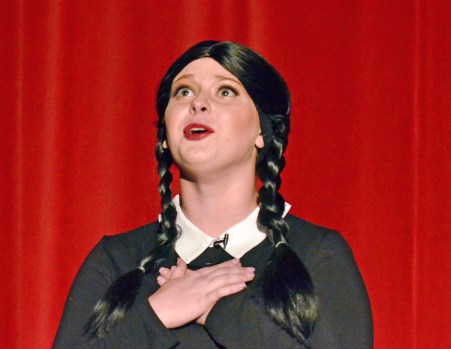 JESSE WILSON channeled The Addams Family's Wednesday Addams for her presentation of the song "Pulled" during the talent preliminary. 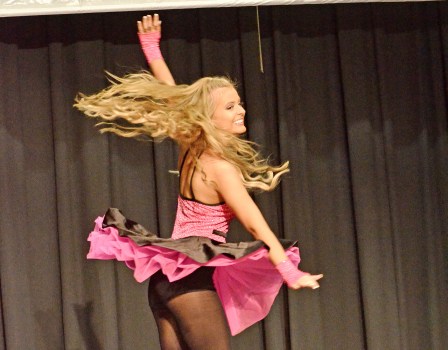 EMMY SEARS was named one of the talent preliminary winners for her tap dance to "Lips are Movin'." 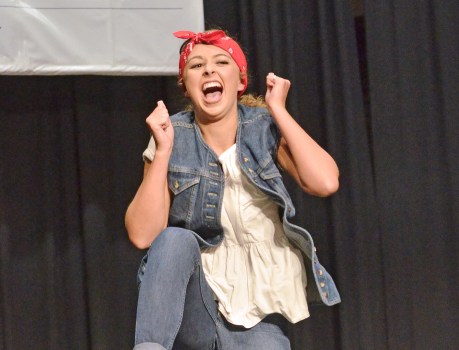 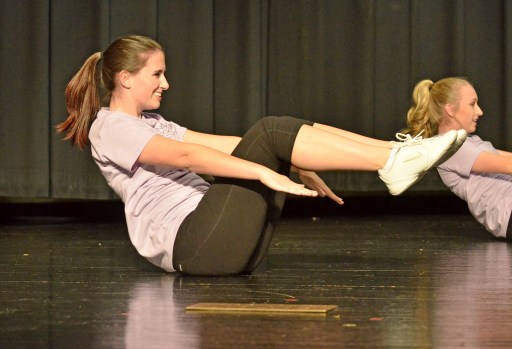 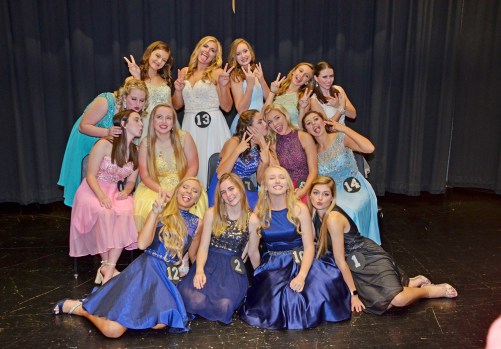 Chillin' WITH THE COMPETITION behind them, the 2019 Lincoln County Distinguished Young Women candidates pose for a goofy group photo as they await the judges' decisions.

STANFORD — There is a new Lincoln County Distinguished Young Woman in town and she is 17-year-old Jessie Wilson of Waynesburg.

“I can’t believe it,” Wilson said after winning the 2019 title. “I’ve been coming to every DYW I’ve possibly been able to since I was seven-years-old. When I was a little girl, I just always loved watching the big girls get up on stage and doing the best they could and watching them do so well. And I entered it from the amazing inspirations I had before me.“

Wilson and 14 other Lincoln County senior girls, vied for the DYW title before a panel of judges and an audience packed with family and friends Saturday night at the Stuart Underwood Auditorium at Lincoln County High School.

All watched intently as the judges assessed the finalists on stage in three of the five preliminaries: self-expression, talent and fitness. The other two preliminaries — scholastic achievement and interview — were judged prior to the program. The top finalists would garner cash scholarships worth more than $23,000.

With a $450 cash scholarship win in interview, a $455 scholarship as scholastic achievement runner-up and a $355 scholarship for talent to go along with her self-expression win, and her name not among the top runners-up, did Wilson feel like she might have the win in hand?

“I was like, ‘Well, it could be me but … Oh, I don’t know,’” she said. “It wasn’t a for sure thing. I never really thought, ‘Oh, I could win DYW.’ All 14 of these girls are so amazing. I’m sure it was the hardest competition to ever judge. I’m just so proud of every single one of us.”

Then, when Wilson did hear her name called by Lair as the 2019 winner, her reaction was … ?

“It still hasn’t hit me, but in that moment it was crazy,” Wilson said. “The butterflies that were in my stomach all night got a lot bigger — but in a better way.”

As the 2019 DYW winner, Wilson received a $4,100 cash scholarship, flowers and a DYW medallion. The scholarship, plus an additional $300 received as a recipient of a Friends of Lincoln County DYW Award, brought Wilson’s take for the night to $5,960.
The blonde-haired LCHS senior took the stage dressed all in black, including a black wig, as character Wednesday Addams for her talent presentation as she performed the song “Pulled” from the The Addams Family musical.

As a veteran of many musicals at LCHS, Wilson is a pro when it comes to performing on stage. Did that stage experience make participating in the DYW a breeze?

“No! There were butterflies the whole way,” Wilson said emphatically. “Before I came on the stage … everything I did I just said a little prayer. I was like, ‘God please just get me through this one so I can get to the next one.’ He got me through it. I’m so happy to be here.”

Butterflies or not, Wilson said she wouldn’t have missed the bonding opportunity DYW gave her.

“I’ve known most of these girls since elementary school, maybe even earlier with softball and things, but I never really got close with a lot of them until this program,” she said. “With our sleepover and with every practice we had, we had a lot of, you know, deep talks, and I just feel so much closer even with the ones I already did know. It’s just a great opportunity to learn social skills, learn life skills and make some really great lifelong friends.”

Wilson, the daughter of Mark and Kellie Wilson, will now represent Lincoln County at the Kentucky Distinguished Young Women Program in Lexington in January.

“It’s barely even hit me that I’m here,” Wilson said of now going to state. “I’m so honored and proud to be able to represent Lincoln County as I go on, but it really hasn’t even started processing yet.

In fitness, participants performed both a group and individual routine. For their talent presentation, each participant selected her own costume and props. They also chose their own gowns for self-expression.

First runner-up in the program was Emma King. King, the daughter of Eric and Nancy King, received a $3,100 cash scholarship as first runner-up.

Muse also received a $355 cash scholarship as a talent winner and a $300 scholarship as a self-expression preliminary winner. For her talent, Muse performed “Gavotte and Musette” from the 3rd Bach English Suite.

Third runner-up was Catherine Smith. Smith, the daughter of Keith and Pamela Smith, received $1,100 as runner-up. She also received a $500 cash scholarship as first runner-up in the scholastic achievement preliminary, a $450 scholarship as an interview winner and $300 scholarships in both self-expression and fitness.

In addition to her runner-up finish and preliminary wins, Smith also was named a co-winner of the Phyllis Cooley Memorial Spirit Award of $300 and was presented a $100 Friends of Lincoln County DYW Award.

Celia San Juan was the DYW fourth runner-up. San Juan, the daughter of David and Lori Smith, was awarded a $550 cash scholarship as runner-up. She was the other co-winner of the Phyllis Cooley Memorial Spirit Award worth $300 and she also was a winner in three preliminaries.

San Juan won a $355 cash scholarship for her talent presentation of a clog dance to “Honey, I’m Good.” She picked up an additional $300 in both fitness and self-expression preliminaries.

Raelyn Amon and Emery Sears were both winners in multiple preliminaries.

Amon, the daughter of Tim and Dana Taylor and Bobby Amon, won a $450 cash scholarship in the interview preliminary and $300 in both self-expression and fitness. She was also the winner of the $400 Friends of Lincoln County DYW Award.

Sears, the daughter of Todd and Tammy Sears, won in both talent and fitness. She received a $355 cash scholarship for her tap dance to “Lips Are Movin’” in talent and $300 as a fitness winner.

Bullock, the daughter of Terry and Tabitha Bullock, won $450 as an interview preliminary winner. Boyle, the daughter of Jeremy and Tracie Boyle, won $355 as a talent winner for her vocal/instrumental Southern Gospel Medley. And Lane, the daughter of Darin and Diana Lane, received a $455 cash scholarship as a scholastic achievement runner-up.

Three of the participants were chosen to share the Jennifer Baker “Be Your Best Self” Memorial Award, with Alexa Wesley, Katherine Rowe and Kaitlynn Wilks selected for the honor. Wesley is the daughter of Paul and Vicky Barnett and Tony Wesley, Rowe is the daughter of Mark and Becky Rowe and Janet Vanhook, and Wilks is the daughter of Dean and Angela Wilks.