Part of Main Street shut down due to gas leak 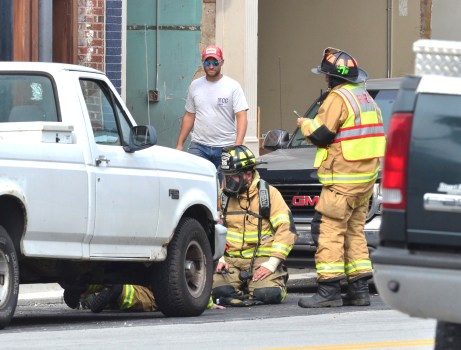 Photo by Nancy Leedy FIREFIGHTERS start to assess the gas line break upon arriving on the 200 block of East Main. 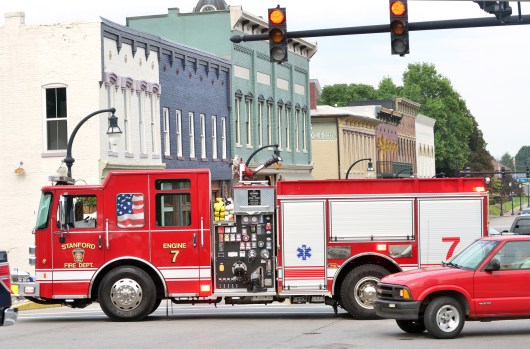 Photo by Nancy Leedy ENGINE 7 of the Stanford City Fire Department was used to clock off Main Street at the Somerset Street intersection following Friday's gas leak. Main Street all the way down to Church Street was closed to traffic for about an hour as the ruptured gas line was repaired. 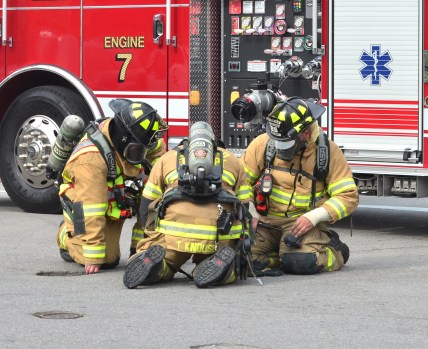 Photo by Nancy Leedy FIREFIGHTERS from the Stanford City Department work to find a cutoff valve for the gas line in the middle of the Main Street-Somerset Street intersection.

STANFORD — The Stanford City Fire Department and the Stanford Police Department responded to a natural gas leak near the construction area by The Bluebird restaurant in downtown Stanford Friday afternoon.

Main was closed from Somerset Street to Church Street after officials say a construction crew working in the buildings adjacent to The Bluebird struck a natural gas line around 4:45 p.m.

“They were moving a heavy piece of shelving, is what it looked to me like, and they kind of let it drop on the ground and it was enough pressure to rupture a ¾-inch pvc gas line,” Emergency Management Director Don Gilliam said. “Apparently this pipe was close to the surface.”

While a gas leak can be a serious threat, no evacuations were made since only a light concentration of natural gas was being emitted.

“There was not really enough (gas) to do any significant harm,” Gilliam said. “If it had been inside a building, yeah, it would’ve been bad, but since it was outside it was releasing into the atmosphere so it wasn’t a significant threat.”

No evacuations were necessary, however, Gilliam said certain precautions had to be made.

“We did move some vehicles, and people that were at The Bluebird, we told them to stay inside,” he said. “Of course, we had The Bluebird cut off their gas stoves because of the leak. Obviously, we didn’t want cars driving through there so we closed the street for the same reason you wouldn’t want anybody smoking close.”

The Main Street shutdown proved to be only a temporary inconvenience for downtown pedestrians and drivers, with the road opened back up just over an hour after the gas line was ruptured.

“Atmos (Energy) was there within 30 minutes, and within an hour we were done and gone,” Gilliam said. “Since it was outside it wasn’t a serious threat, but it certainly was something we had to take care of as quickly as possible.”