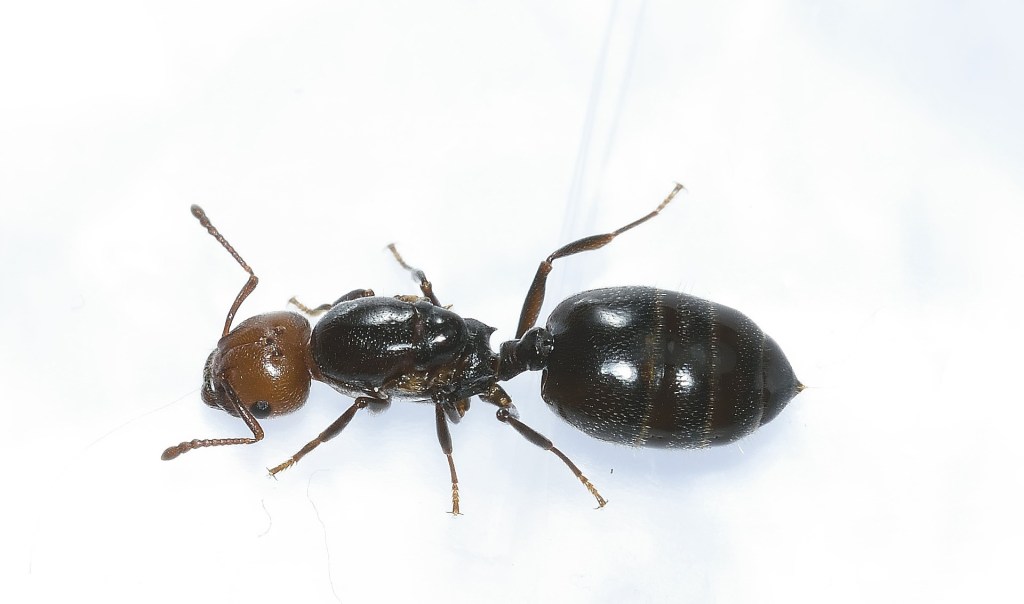 Ants are the most frequent and persistent pests encountered around homes and buildings. Besides being a nuisance, they contaminate food, build unsightly mounds and cause structural damage by hollowing out wood for nesting.

To most householders, all ants look pretty much the same. In truth, dozens of different species occur around homes and buildings, each having unique characteristics, which may influence the method of control.

In Kentucky, the most common household-invading ants include pavement ants, carpenter ants, acrobat ants, and odorous house ants. The latter ant species has become a huge problem in recent years, causing fits to householders and pest control professionals alike. Dealing with ants can be very frustrating.

The following recommendations pertain to all common structure-invading ants in Kentucky except carpenter ants.

The Battle Plan: The mistake most people make when trying to control ants is only spraying the ones they see. This approach usually fails because the ants seen foraging over exposed surfaces is only a small portion of the colony. Typically, there will be thousands of additional ants, including one or more egg-laying queens hidden somewhere in a nest. Eliminating queens and other colony members within nests is often the key to effective control.

Buildings contain many favorable hiding and nesting sites for ants. Most of these areas are hidden, making it difficult to determine their precise location. When the location of the nest cannot be determined or is inaccessible, insecticide baits often are a good option, especially for homeowners. The advantage in using baits is that foraging ants take the insecticide back to the nest and feed it to the queen (s) and other colony members. As a result, the entire colony often is destroyed.

Place the baits next to wherever ants are seen, preferably beside ant trails. Do not spray other insecticides or cleaning agents around the baited locations as this will deter ants from feeding on the bait. Initially you should see an increase in the number of ants around the bait station. Do not spray them. This indicates that the ants are feeding on the bait and transporting the insecticide back to the nest. Ant activity often will subside in a matter of days as the number of ants in the colony declines. Continue to place additional baits wherever ants are seen. Ants are rather finicky in their food preferences and may alter them throughout the year. If one bait product is not attractive or does not seem to be working, try another. Optimal results usually require a sustained period of feeding. Professional pest control firms have a wider selection of products to choose from, and can usually provide relief when homeowners efforts are unsuccessful. Retail baits usually will not control carpenter ants.

Ants noticed inside the home may actually be nesting outdoors in the yard. Try to trace the ants back to the point where they are entering from outside; this may be along a windowsill, beneath an entrance door, or where the exterior siding meets the foundation wall. Often the nest will be concealed under stones, mulch, landscaping, timbers, pavement, or beneath grass adjoining the foundation wall. While it takes patience to locate an ant colony outdoors, results will be more permanent than if you spray only where ants are seen trailing. One way to entice ants to reveal the location of their nest (s) is to place small dabs of honey or jelly next to where ants are observed. After the ants have fed, they will head back to the nest.

When a belowground nest is discovered, the colony can often be eliminated by spraying or drenching the nest location with a liquid pyrethroid insecticide such as Spectracide Triazicide®, Ortho Home Defense Max®, or Bayer Advanced® Lawn and Garden Multi-Insect Killer®. Another effective and convenient way to control some species of outdoor and indoor-nesting ants is with a granular bait product, such as Combat® Ant Killing Granules. Sprinkle the bait in small amounts beside outdoor and mounds, along pavement cracks, and other areas where ants are nesting or trailing.

Ant entry into homes can be reduced by caulking around door thresholds, windows, and openings where utility pipes and wires enter buildings. Ant entry can be further reduced by spraying one of the above-mentioned liquid insecticides around the outside perimeter of the building. Consider applying a two to six foot swath along the ground adjacent to the foundation, and a few feet up the foundation wall.

Also treat ant trails and points of entry into the home, such as around doors and where utility pipes and wires enter from outside. In Kentucky, spraying or applying granular insecticides to the entire yard is not recommended, and will seldom if ever, solve an ant infestation indoors.