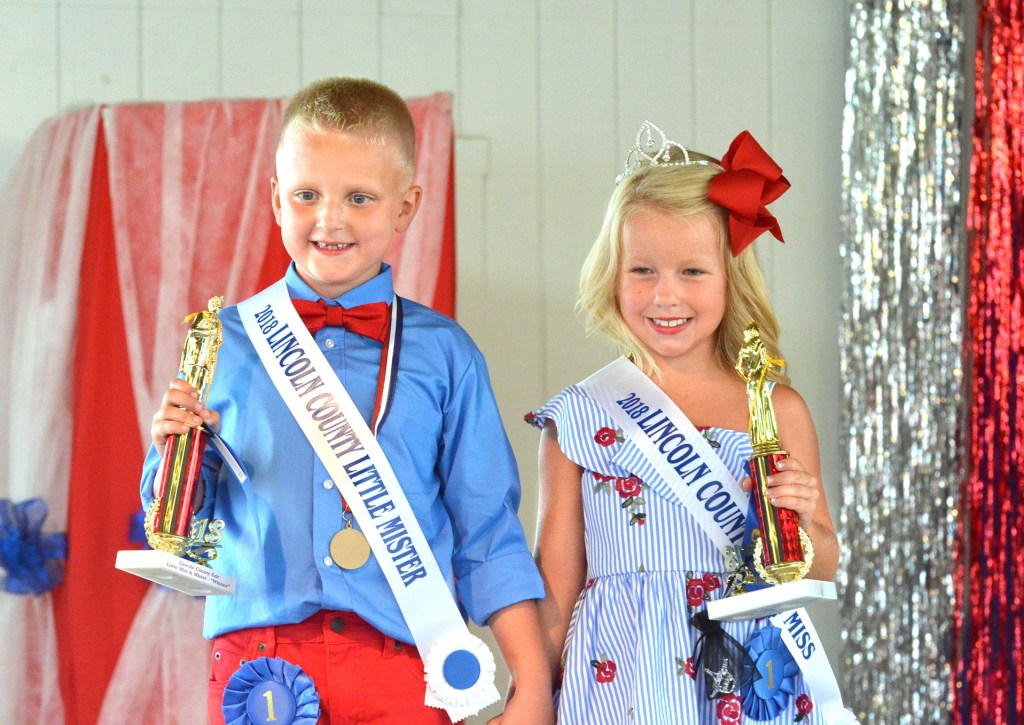 STANFORD — The 2018 Little Miss and Mister Lincoln County were crowned Thursday night in the Teddy Gilbert Pageant Pavilion at the Lincoln County Fair.

After answering questions such as “What are your hobbies?” and “What is your favorite thing to do at the fair,” Mia Oney and Teegan Dwight Mullins stood center stage basking in the cheers of proud parents, family and friends as they were named the 2018 Little Miss and Mister winners.

Oney, 7, dressed in a blue and white striped summer dress with appliquéd red flowers, and Mullins, 7, wearing a blue button-down shirt with red shorts and a red bow tie, were presented as a couple when they took the stage and they were chosen as the best pair out of five couples.

When asked what her favorite hobbies were, Oney responded that she liked swimming, dancing, pageants, playing and feeding her 71 goldfish in her free time. Mullins’ hobbies centered around sports and the great outdoors as he listed camping, riding his 4-wheeler and playing soccer, basketball, baseball and football. He also likes spending time with his little brother.

The first runner-up couple was Madison Curtis and Creed Mattingly. Curtis, 6, is the daughter of Brad and Mitzi Curtis of Hustonville, and Mattingly, 6, is the son of Jesse Mattingly and Chelsea Manuel of Stanford.

In their interview, Curtis said she liked cheerleading and soccer and Mattingly’s hobbies were basketball and swimming.

There was also a People’s Choice winner announced, with the winning couple decided by audience vote. The winners of the People’s Choice award were Hayleigh VanHoose and Cooper Gray. VanHoose, 5 is the daughter of Tiffaney Dearman and Josh VanHoose of Hustonville, and Gray, 7, is the son of Paul and Jennifer Gray of Hustonville.

Each of the Little Miss and Mister participants responded to questions in a pre-contest off-stage interview and were asked some questions by emcee Carlee Cornett in front of the judges.

The Little Miss and Mister contest was open to girls and boys five to seven years of age. Each contestant received a participation trophy and ribbon.