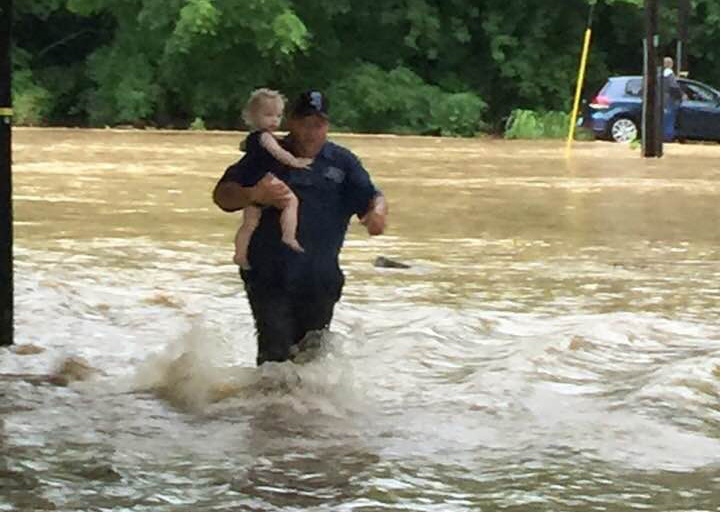 A child is carried through flood waters to higher ground in the Hustonville area Tuesday. (Photo submitted)

Extensive flooding in Lincoln County has led to the declaration of a state of emergency.

Emergency Management Director Don Gilliam said a state of emergency had been declared, which started Monday and would likely last through Wednesday. Calls about flooding problems began coming in before noon on Monday. By Tuesday, essentially the entire city of Hustonville in western Lincoln County had flooded, he said.

Emergency responders helped evacuate people stranded in at least four homes due to the flooding, Gilliam said. In the Moreland community, firefighters rescued two people from two different homes on Ky. 2141 spur; people, a baby and some animals were rescued from a home on Mt. Salem Road, he said.

Gilliam said an estimated 12 to 15 homes and trailer homes had been damaged by flooding in the Hustonville area as of about 12 p.m. Tuesday.

Main highways in western Lincoln County were shut down due to flooding Tuesday, including Ky. 78, Ky. 1194 and Ky. 2141.

“It’s hard to get around over in the west end when it starts flooding,” Gilliam said, but fortunately, as of mid-day Tuesday, there had been no reports of anyone trying to drive a vehicle through standing water. That’s how people get in trouble most often during flooding, he said.

Flooding impacted a crude oil well in Lincoln County, which began overflowing into the Green River along Ky. 698, Gilliam said. A hazmat team was sent to manage the situation, but poor cell and radio service in the area meant they were largely out-of-contact with the Lincoln County Emergency Operations Center while at the scene, Gilliam said.

Some roads closed, reopened as water levels dropped, then re-closed later Tuesday after a second period of heavy rain, Gilliam said. Besides the main highways that were made impassable, countless side roads were also flooded, and numerous bridges and culverts were damaged or washed away.

“We quit putting out road names (because) we just got so many,” he said.

Parts of Lincoln County, including Gilliam’s home, got at least 5 inches of rain even before Tuesday’s storms began dumping additional inches. Gilliam said the National Weather Service had estimated rain could fall at up to 1.5 to 2 inches per hour at times on Tuesday.

“2 inches per hour gives us problems,” he said.

Gilliam said declaring a state of emergency in Lincoln County “gives us the opportunity to receive a national declaration (of emergency), which would bring FEMA into the picture” and open up the possibility that local property owners could receive financial assistance for damage caused by the flooding.

But getting FEMA involved is “not a given,” he said: National declarations are usually reserved for disasters with a more widespread effect.

Gilliam said at the peak of the flooding, there were probably about 15 firefighters and four law enforcement officers handling emergency calls in the Hustonville area and western Lincoln County.

After the water recedes, there will be more work to do.

“Travel, commerce — it’s all impacted and will be impacted probably for a couple days,” he said. “We’ll have to inspect bridges, culverts, that kind of thing.”