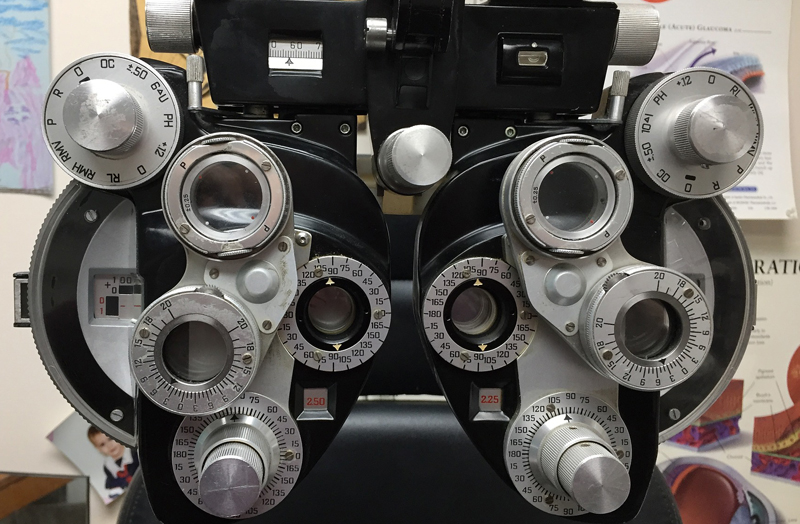 HUSTONVILLE — Joan Hafley didn’t know how important it was to visit the eye doctor for regular check-ups until she accompanied a friend to an appointment 15 years ago and left the office with life-changing news.

It wasn’t even her eye appointment, Hafley said during a phone interview this week.

“I had gone to the doctor with a friend for her to have an eye examination and when they finished the doctor said, ‘It’s been a while since you’ve had an examination, why don’t we do one on you?’” Hafley said. “When he started doing the test, I just couldn’t see a lot of the letters. They had to be huge.”

The doctor suspected Hafley could have macular degeneration and sent her to a specialist for further examination. The specialist confirmed the diagnosis.

“I was so surprised because I thought that I had good vision. I’ve always been an avid reader and I continued to read,” she said.

She didn’t know it at the time, but since she could see fairly well out of one of her eyes, Hafley said she didn’t really notice that her sight in the other eye was getting worse.

“I had good vision in my other eye and I guess I relied on that,” she said.

Hafley, an 89-year-old retired teacher from Hustonville, is one of millions of Americans who have some form of age-related macular degeneration (AMD), according to information provided by the pharmaceutical company Regeneron on the website www.looktoyourfuture.com.

“What many people don’t know is that AMD can progress into wet AMD, the more serious form of the disease,” the site states.

In fact, 90 percent of AMD-related severe vision loss is caused by wet AMD, a reality Joan (Hafley) faced when she was diagnosed.

The retinal disease affects the part of the retina known as the macula, which is responsible for central vision.

When she was diagnosed in 2003, there were no treatments available that could halt the progression of the disease, but she took her doctor’s advice and began eating more green vegetables and taking daily vitamins.

“Then, one day they called me from this doctor’s office and said that they were going to begin a study and after that I started getting injections in my eye,” she said.

Hafley said the injections have helped maintain her existing vision and prevent any further loss of vision or spread of the disease.

“They numb your eye, there’s no pain with it or anything. I go once a month and get an injection in my eye,” she said.

Despite some vision loss, Hafley said thanks to the ongoing treatment she can still drive a car and get around on her own.

“I have been so blessed that mine has done really well,” she said. “I just feel like I can see and I can get around and all of that, and it’s because I went and found it and did exactly what they (doctors) told me to do.”

Hafley’s personal experience with wet AMD has inspired her to spread the word about the importance of eye health and encourage others in the community to have regular eye exams.

“I don’t know how long I would have gone before I actually realized it, but everybody needs to have yearly eye exams so that something like this can be identified early and you can keep your eyes healthy,” she said.

Whether it was luck or fate, Hafley is grateful that she went with her friend to the eye doctor 15 years ago and she hopes that by sharing her story, she can prevent others in the community from waiting too long before having their eyes examined.

“You have a tendency to neglect those things if you’re not having problems,” she said. “But I urge people to go and have an eye exam so if there is any problem, it can be identified early and therefore you can save your vision.”

More information about Wet Age-Related Macular Degeneration (Wet AMD) and other retinal diseases can be found online at www.looktoyourfuture.com. Look to Your Future is sponsored by Regeneron.