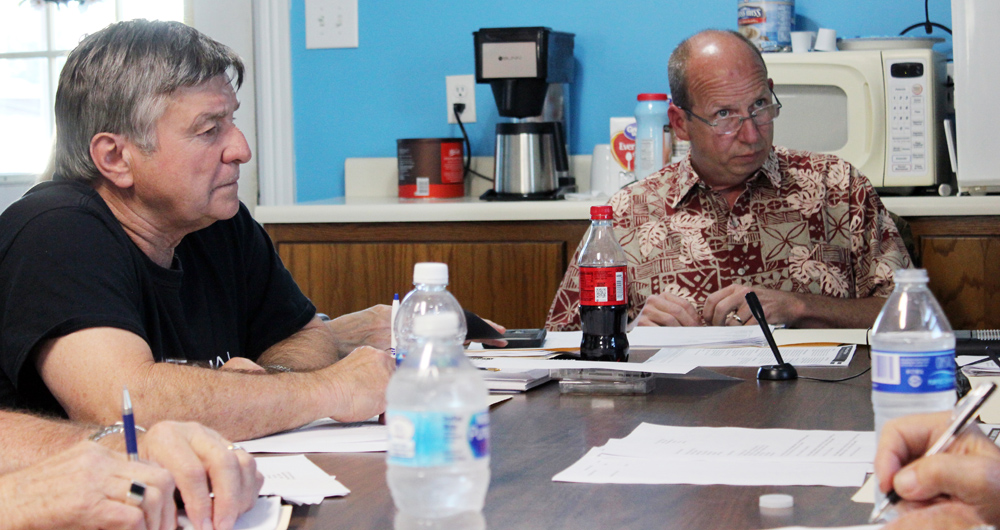 HUSTONVILLE — After Hustonville City Council members voted last month not to send a letter of support to the Lincoln County Sanitation District for the second phase of the sewer project, the city received a response that officials say misrepresents their position.

The vote to refrain from writing a letter of support was unanimous, according to Mayor David Peyton, who said the letter was requested by the Lincoln County Sanitation District as part of their application for funding of the second phase of the sewer project.

Following last month’s meeting, Peyton notified the Sanitation District of the council’s decision and Tuesday night, the mayor shared a document he received in response from the sanitation district.

“The City of Hustonville has issued a vote of ‘no confidence’ in the sewer project,” Peyton said, reading the document to city council members.

“It wasn’t phrased that way, we just refused to do a letter of support,” he added.

“As part of this, they have, in essence, requested that the sewer system in city limits not be completed,” the document continues. “This matter will need to be considered in the ultimate selection of this phase in the sewer project.”
Council member Marc Spivey disagreed, calling the sanitation district bullies.

“Those are misrepresentations of what we came up with,” Spivey said. “They’re wrong in saying that. We did not say anything like that … They’ve been bullying. It’s been like that this whole process. We need a sewer to protect our water systems and all that but the way they’ve gone at it, with the bullying technique…they’ve bullied the citizens of this end of the county.”

City council members were not pleased with the way the first phase of the sewer project was handled in Hustonville, specifically when it comes to Danville Street, which they say was left damaged. The council said they asked the sanitation district to repair the road and were told there was not enough money leftover to cover the repairs.

The contractor covered the cost out of his own pocket, Peyton said.

“They didn’t repair the road they damaged. There’s a whole lot they didn’t do that they were supposed to do,” Council member Jimmy Evans said.

Peyton agreed, saying all of Hustonville should have been included in phase one instead of the newer subdivisions with residents with newer, working septic systems.

“Myself, I’ve got a few issues (and) two of them really stand out: They stood right here at a council meeting and said ‘If you have to have a pump, you don’t have to hook on.’ Then they told us after they tore up Danville Street they didn’t have the money to fix it,” Peyton said. “They should’ve told us before they tore it up. If you can’t afford to fix it, then don’t tear it up.”

According to the sanitation district’s document titled “Phase 2 Alternative Considerations,” the original second phase of the project extends to areas on the north side of Hustonville, including the Huston Point subdivision and the remaining part of Danville Street that was not included in the first phase.

“City Councils are subject to change with each election so this situation may not continue in the future, but at this time it must be part of this evaluation on this project,” the document states.
“I anticipate they’re going to ask me, ‘Does the city council want us to finish in Hustonville?’” Peyton said.

“If that’s what they originally put into phase two, yes, finish phase two,” Spivey said. “We’re not kicking the sewer system out, we want it in here.”

“The board will be considering the fact that the city council elected not to write a letter of support,” Payne said. The next sanitation district meeting is Thursday (today) at 7 p.m. Payne said he is out of town and won’t be at the meeting but Peyton has been invited to clarify the city’s position.

Judge-Executive Jim Adams also hadn’t seen the document as of Wednesday but was sent a copy to review. Adams said he was disappointed in the Hustonville council’s decision not to write a letter of support.

“Somebody’s got to do it so we might as well do it now. The longer you wait the more expensive it’s going to be and the more people are going to be upset,” he said.

Adams said the letter of support was requested to be included with the Community Development Block Grant (CDBG) funding application for the second phase. The document for alternative solutions that Peyton received was written in anticipation of Thursday’s sanitation district meeting.

“The board has to decide on the design for phase two, so the design will either be the remainder of the Hustonville project or expand the Moreland project,” Adams said. “On the economic side it makes sense to expand up there and not in Hustonville, as far as cost per property.”

Adams said that’s an alternative being proposed if Hustonville decides it does not want the second phase of sewer construction to move forward.

“When you refuse to send a letter of support, that’s a vote of no-confidence,” Adams said. “…This does nothing but improve their city, as small as it is.”

With or without Hustonville’s support, Adams said the county will continue to move forward with progressive projects.

SO YOU KNOW
The Lincoln County Sanitation District meeting will be held May 3 at 7 p.m. at the Lincoln County Courthouse in the Crab Orchard Room. The meeting is open to the public. More information on the sewer project, as well as the related financial assistance program, can be found online at www.lincolncountytapon.org.