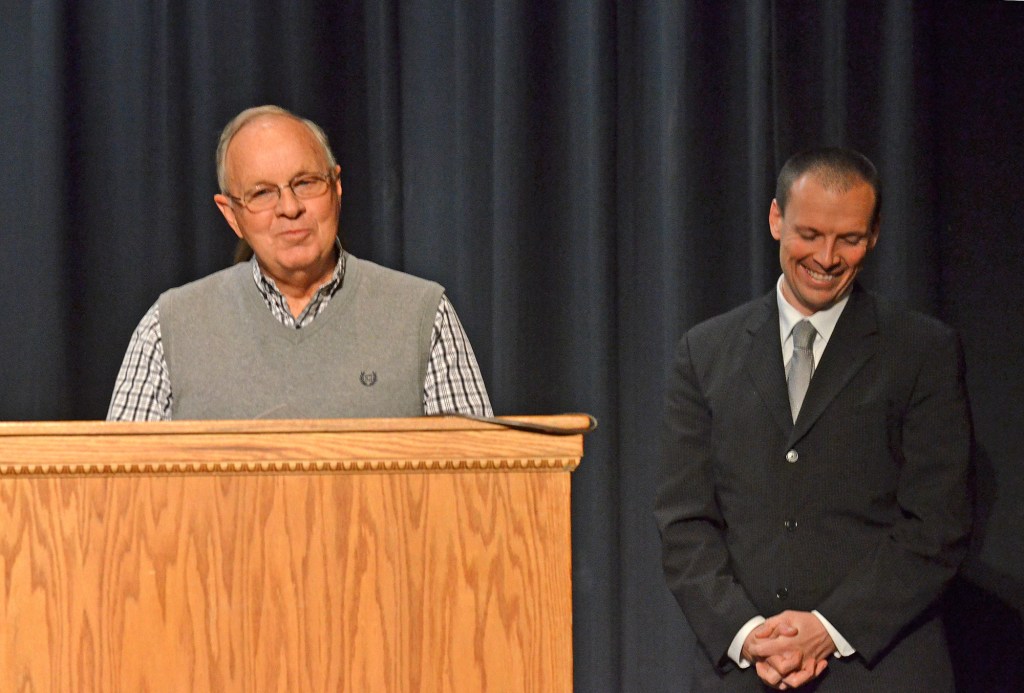 (Photos by Nancy Leedy) Lincoln County Citizen of the Year Vola Brown, left, makes a joke after John David Friend, right, confesses that he lied to his preacher to get him to attend the annual Chamber of Commerce Awards Banquet.

STANFORD — The Stuart Underwood Auditorium had a lot of people filling its seats under false pretenses Tuesday night. However, it was all for a good cause, as they were there to be honored by their friends, family and members of the community at the annual Lincoln County Chamber of Commerce Banquet.

Vola Brown, one of those unsuspecting attendees, looked as comfortable at the banquet podium as he does delivering Sunday sermons at Grace Fellowship Church after being called to the stage.

Brown’s natural reflex might have been to ask the crowd to reach for their Bibles, but he was not there to preach. Brown, a resident and minister of Lincoln County for 40-plus years, was there because he was chosen as the Chamber of Commerce’s Citizen of the Year for 2018.

“I’ve been honored since 1979 to serve Lincoln County. I appreciate all the people that I’ve gotten to know while being here. It’s been a great honor. This award means a lot,” said Brown. “I have been sort of — I won’t say lied to, but I’ve sort of been left in the dark on things to be here tonight. Thank you so very much.”

Mary Benton Friend and John David Friend, members of the Chamber Board of Directors, made the presentation of the Citizen of the Year award to Brown.

Brown, who resides in Stanford with his wife, Jeannie, was once quoted as saying, “I have been a Lincoln County resident for more than 40 years; and I do love and desire to help my county in every way that I can!”

Brown has three children, Kim, Stephen and Jeremy, along with seven grandchildren.

The first award of the evening was presented by Martha Dee Bastin, who introduced the recipient of the June King Bastin Service to Community Award, named after her late mother. Kyle McKnight was called to the stage to accept the award for his many years of community volunteerism. 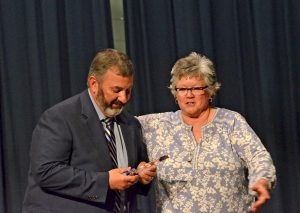 “In the past, there’s been some really deserving ladies that have received this award, but we’re going to mix it up tonight,” Bastin said. “It’s going to a man that is the epitome of community involvement and is always there anytime we need anything.”

McKnight, the owner of McKnight Funeral Home in Crab Orchard, has been involved in the Crab Orchard Celebration for many years, sponsored the Watermelon Crawl, was instrumental in getting the Veterans Memorial Wall in Crab Orchard, served on the ambulance board, supports Relay for Life, sponsors the high school fishing team and is a strong supporter of our community’s youth. He is active in his church, serving as youth leader and teen Sunday school leader, while also serving as a board member and board secretary. In addition, he has been a fixture at many Lincoln County sporting events, serving the community’s young athletes in many capacities.

“He has cooked many meals for our athletes, donates to the Death Valley Bowl and I am sure does so much more for LCHS than any of us will ever know. Coach (Travis) Leffew said he is a God-send,” Bastin said. “Kyle has coached Rec League football, basketball and baseball. If you have ever been to a game, you know he is not only teaching the sport, but giving the kids guidance to become upstanding young men and women.

“I am sure there is more he does behind the scenes. We should all take a page out of Kyle’s playbook and give back to our community.”

McKnight, after being pushed to the podium by Bastin, had just a few words to share.

“Thank you all. This is a pleasant surprise,” he said. “… I am the most blessed man in this room. I have a supporting wife, my family, my staff. My mother-in-law is here. Everything I could dream of as far as accomplishments, I’m a blessed man. But to receive this, I don’t think I’m deserving. But I do thank you.”

Thomas Benjamin “Bud” Bright was named Farmer of the Year for his successful involvement in agriculture over the last 72 years. 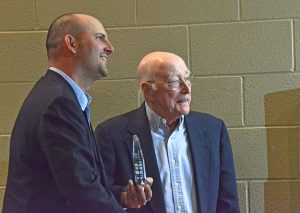 Bud Bright, right, is given the Farmer of the Year Award by Will Stallard. (Photo by Nancy Leedy)

Never one to shirk a hard day’s work, Bright, at the age of 18, purchased a straight truck from Farmers Supply in Danville and began hauling everything from concrete blocks to cattle and tobacco, while at the same time working with his father and uncle at Farmers Tobacco Warehouse and helping his parents, John Rochester and Alice Montgomery Bright, run the family farm on U.S. 150. In 1948, at the age of 20, Bud entered a partnership with his father on the farm, where he currently resides, raising tobacco and beef cattle.

“Throughout Bud’s life, he has seen agriculture transition from teams of mules to tractors and technology,” Lincoln County Extension Agent Will Stallard said. “Bud has always been open to technology, being an early adopter of computer record-keeping programs like Cattleworks to better track his farming records.

“On the farm, Bud likes a good crossbred calf utilizing purebred bulls and crossbred cows. Being conservation-minded, he was an early adopter of controlled winter feed areas, fencing livestock out of woodlands and streams. He believes in improving his forages for his beef cows using alfalfa, clover, and orchardgrass in a rotational grazing system. In 2000, Bud was named Master Conservationist of the Year.”

Bright expanded his business ventures by starting Bright’s Bottle Gas Company in 1956. For the next 52 years, he provided rural homes and farms with propane gas. He also ran LTJ Transport, Inc. and Bright’s Propane Service. He served The Kentucky Propane Gas Association as president and as a board member for over 20 years.

“With all his business ventures, Bud’s most enjoyable times were, and still are, on the farm,” Stallard said. “Most all his vacations never made it further than Hanging Fork Creek, which suited him just fine.”

Jody Wells was honored with the Health Service Award for her 18 years of service to the families of Lincoln County. 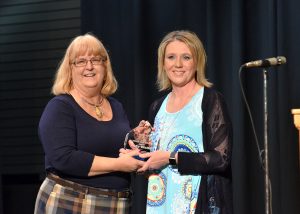 Wells, who works at Ephraim McDowell Fort Logan Hospital in Stanford, was moved to tears as she accepted her award from co-worker Ina Glass.

“How lucky am I to get to work with my mother (Paula Ledford), and my best friend,” Wells softly whispered. “Thank You.”

Wells began her career in the medical field in 2000 at Ephraim McDowell Regional Medical Center. When the opportunity arose for her to come home to Lincoln County, Wells transferred to the Ephraim McDowell Fort Logan Hospital surgery department. Co-workers said that Wells is “known as one of the strongest, most well-rounded nurses that we have.” Wells eventually got the opportunity to move into management and she became the director of surgical services at EM Fort Logan Hospital — a position she still holds today.

Wells would return to school in 2012, where she obtained her master’s degree in nursing administration. She has used this education to be a better leader. She is also now an instructor at Campellsville University. Wells is also in charge of the Kentucky Organ Donor Registry at Fort Logan.

In her “spare time,” Wells is a devoted mother of four children. Wells and her husband, Jamie, spend a lot of time following their children — three in high school, one in elementary —  in their many sports activities and they also are youth leaders at Watts Chapel Baptist Church in Crab Orchard. At her church, Wells also sings in the choir and cooks for the AWANAS program.

Frank Horton was introduced as this year’s recipient of the First Responder Award as Chamber Director Donya Saylor welcomed him to the stage. 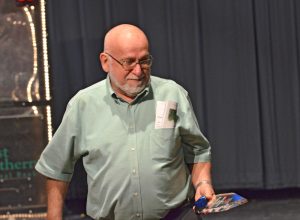 Horton, who has served as an EMS chaplain, has dedicated the past 35 years of his life helping and protecting the citizens of Lincoln County at some of the worst times in their lives. He has served on the Station 3 Fire Department in Hustonville, Fire Chief at the Moreland Firehouse Station 7, McKinney EMS and the East End Ambulance Service.

Horton’s thoughtful ministering to both physical and spiritual needs has not gone unnoticed, as evidenced by some of the nominations. One man, who suffered devastating injuries in 2011 after falling from a tree stand while hunting, was one of those citizens Horton helped.

“Not only did Frank respond (to the accident) but he helped in my rescue and comforted my wife as I was brought out …. I  appreciate Frank Horton and the job he has done for myself and my family.”

Another family was touched by Horton’s kindness in 2015 when their daughter broke her arm and Horton just happened to be there when it happened.

“The fracture was bad. It was an open-arm fracture. Frank called for backup and knew we needed surgery. We were air-lifted out to UK and Frank and his wife followed to make sure we were okay.”

Horton is also involved in the community through his work with his church, including coordinating First Responders Day activities. He is also active in the Masonic Lodge and enjoys volunteering to help the youth in the county, such as working with the Youth Fishing Day at Cedar Creek Lake.

Daveida Smith, a special education teacher, was selected as the winner of the Big Apple Award for educational service. 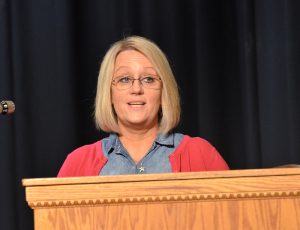 In her 20-plus years in education, Smith has devoted her time to helping the special needs students of Lincoln County. When she could have left the local district to go to a higher paying position, she stayed in Lincoln because her emphasis is not on money but rather making her community better through educating its struggling youth. Smith has made numerous home visits to the homes of students considering leaving school and she has dedicated hours to going out and finding families and students when they have been absent from school, to encourage them to return to school. She also makes sure that student mothers stay caught up on their credits so that they can have the option to graduate with their class. She also assists families and students in identifying resources to assist students after graduation.

As one nominator noted, “Whether it is supporting them in their athletic events or providing a reward for them for positive academics and behavior, Mrs. Smith is always there to help them. She teaches her students that education is important but so is becoming a contributing member of our society.”

Lincoln County Superintendent of Schools Michael Rowe made the presentation of the award to Smith.

“The only thing that I can say, number one, is that I want to thank God for the gift that he gave me. I really do have the greatest job in the world, you guys,” Smith said. “I get to work every single day with grades sixth-12th students and I wouldn’t want it any other way.”

The UK Cooperative Extension Services was named the Business of the Year. 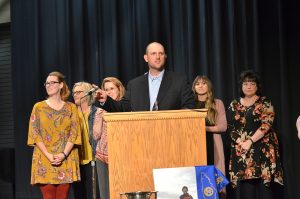 The Lincoln County Cooperative Extension Service office won the Chamber of Commerce’s award for Business of the Year. (Photo by Nancy Leedy)

Andrea Miller, Chamber Director, presented the award to Extension office members, noting that the extension office was not traditionally considered as a business, but that the organization was in the business of practical education.

Since the early 1920’s, the UK Cooperative Extension office has provided practical education to help individuals, families, businesses and our community by teaching problem solving, developing life skills and building a better future for the community’s individuals.

Jessica Cornelius, a life-long Lincoln County resident and outstanding golfer, was the featured speaker at the banquet, which was themed “On Par for Excellence.” Cornelius, a certified physicians’ assistant, has won many golf titles over the years, including the 1984 Women’s Kentucky State Champion title.

The Cattleman’s Association cooked steaks for the evening’s meal.