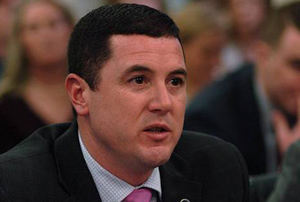 STANFORD — The pension and budget bills recently passed by the Kentucky General Assembly are much better than their original proposals, according to House Majority Caucus Chairman David Meade (R-Stanford).

Proposed changes to the state’s retirement systems, as well as Gov. Matt Bevin’s proposed budget with substantial cuts to education funding, have provoked protests from public educators and state employees for months.

But there were several lawmakers who have also pushed back on the governor’s proposals, according to Meade, and it’s because of that pushback that the bills passed this week did not include many of the more controversial proposals.

“This bill does not make any changes for current retired teachers,” Meade said Tuesday. “There were several folks who have pushed back on the governor’s pension proposal from the very beginning, and continued to push back, because we felt that if you were hired and made promises, then we should keep those promises.”

Meade said the group continued to push back against the proposals up until last week.

“We stood our ground and we backed them up against the budget,” Meade said. “So, when it came time to do the budget, we skipped over the pension plans because we had to have a definitive answer of how much we would put into those plans. We had to know how we were going to budget for that in the future.”

“Because we backed them up against that timeline, we got to the point where we couldn’t wait any longer, the budget had to be done,” he said. “So they came to us and said, ‘If you’re still in agreement with this plan, we will do it, we will give in, just so we can get this budget done.’”

With the session coming to a close, Meade said legislators did not have the amount of time needed to pass a brand new bill and that is what prompted them to put the pension changes on an unrelated “wastewater services” bill.

“This happens pretty much every year on big issues that you’re negotiating on,” he said. “At this point, each bill has to have at least three readings in each chamber before it can be passed. It has to have at least five days in order to get through the process. We did not have that amount of time left; we only had one day left.”

When that happens, Meade said legislators look for a bill that meets the proper criteria and has already passed the Senate, moved onto the House and has had three readings.

The only bill that met that criteria was a sewer bill.

“I hate that that was the name of it; I apologize for that,” Meade said. “Many of us feared that if we did not do something, the Governor would call us back into a special session again to do pension and it could have been much harsher on the teachers and the state workers.”

Monday’s protests drew attention to the fact that the bill was passed quickly with no time for public input and without an actuarial analysis, which is required by law.

According to Kentucky Revised Statute 6.350, any bill that makes changes to state pension systems shall not be reported from committee unless accompanied by an actuarial analysis.

Meade said this week that an actuarial analysis on last Thursday’s pension bill had already been ordered.

“Every piece of that pension plan had already been scored in multiple proposals because we had seven or eight different proposals throughout the course of the eight months that were scored,” he said.

Each of the proposals were scored individually, he said, so lawmakers already knew how much Thursday’s pension bill would save the state.

“There was an actuarial analysis already ordered on it. It actually came in that night before we passed the bill so it is there and it’s attached to the bill on the website now,” Meade said.

Kentucky Attorney General Andy Beshear disagreed with legislators and vowed to challenge the pension bill — which he says violates the law in multiple ways — in court.

Many argued that legislators also didn’t have enough time to read the 291-page bill Thursday before voting. Meade said it took him about 30 minutes.

“Everybody keeps saying it was a 291-page bill; it was not,” Meade said. “When you do a bill, you have to put the entire language of that law in that bill, whether it’s changing or not. So the changes are highlighted and underlined for us to be able to see. The total changes in that bill might have equaled up to 25 or 30 pages but it took me about 30 minutes to read it all and fully understand.”

Meade said many of the legislators now saying they stand beside the teachers are the ones who helped create the pension problem.

“Allowing it to get to this point and not making some minor changes early on has led us to the point,” Meade said. “Those that are now saying that they stand beside the teachers, and they support the teachers, the ones on the floor that were throwing out the rhetoric, are the ones that created the problem”

The only change include in the pension bill for current teachers relates to how their sick time is accrued, Meade said.

“As of Dec. 31 of this year, whatever they’ve (teachers) accumulated up to that point, they can use to enhance their retirement at the end, when they get paid out for them,” Meade said. “After Dec. 31, they can still continue to accrue those days and use them however they like to, whatever they have leftover at the end, however many they’ve accrued, they get paid for those just like they normally would. The only difference is, it doesn’t get counted for retirement enhancement.”

While sick days are the only real change for current retired teachers, the bill ends the inviolable contract for new teachers hired after Jan. 1, 2019. The end of the contract also means lawmakers can make changes to retirement benefits provided at any time in the future.

State employees will no longer be able to bank their sick days to retire early, he said.

“All we have done is said, ‘You have to work to the amount required to retire and then once you do, you can take the time and add it onto the end as an enhancement,” Meade said. “You can’t retire early with this. Now, if you’re within five years of retirement, it will not change for you.”

The bill will also require the group of state employees hired between 2003 and 2008 who do not currently pay any cost for health insurance to pay one percent.

The other major change in the bill removes a $5,000 death benefit for state employees only; it does not include teachers or anyone hired prior to 2014.

The primary component of the pension bill relates to new teachers, who will be placed in a “hybrid cash-balance retirement plan.”

“It’s going to take us a little longer to pay that off (unfunded pension liabilities) but once it’s paid off, from this point forward there will be no risk to the system or the employees in that system,” he said.

Meade said some have criticized the new bill saying it does not save enough.

“That’s why you hear the critics say, ‘This only saves $300 million dollars,’ because we are putting more money in to pay that unfunded liability to make sure the system sustains itself, and pulling the employees out of it so that, in the future, it is a solid system and there is no concern about insolvency,” Meade said.

In 2013, state employees were moved to the hybrid cash-balance retirement plan.

“That had been researched for a couple of years … We knew, as it has already started to turn the state retirement system around, which is still in turmoil right now because it got so low, but it has started to turn that system around now and we knew the hybrid cash-balance plan could work,” Meade said. “That is the key in order to sustain the system, to get those new hires out of this defined benefit plan.”

While public educators worry that the changes to the pension system will deter people from entering the public education profession in the future, Meade said the new plan is expected to put more into retirement plans than the defined benefit plan.

“My wife is a teacher. Understanding this process, I knew that this is the best case scenario in order to truly fix the systems and not hurt our teachers … and (it) also wouldn’t jeopardize the teaching profession with being able to attract good teachers coming into the field.”

The budget bill, which was passed Monday, does not include several of the proposed cuts in education funding that were included in the governor’s budget, according to Meade.

“The budget restores the cuts and funds it much higher than what it was,” Meade said. “It also restores money back into the Family Resources and Youth Services Centers, community education …”

Textbooks and professional development, which were expected to see cuts under the governor’s proposal, are not line items in the state budget, Meade said, but there is money in the Department of Education to pay for those programs.

“That money is there, it’s just not as a line item because that (allows) the department to choose to do whatever they want to do,” he said.

The budget does not provide funding for charter schools, another previously opposed component of the governor’s budget proposal, but many Lincoln County voters have asked how Meade can claim to support public education after voting in favor of charter schools in March.

“There are population guidelines in that and there is a minimum number of students who must come to that school when a charter school is started,” Meade said. “With those population guidelines in place, the only places that it really pertains to is Louisville, Lexington, possibly Bowling Green. Rural areas will never see a charter school under this bill.”

“Because we know how critical it is right now for inner-city students and their education, Louisville and Lexington were wanting that opportunity and we gave them that opportunity in those bigger cities.”

Meade said he’s experienced protests and rallies before this week but Monday was probably the biggest he’s witnessed.

“If people stop and think — I know people are upset about the things that have been said and the rhetoric that has come from other elected officials — if they stop and think about it … in the media, they have never seen anybody really but the governor and maybe a couple of senators that have said anything negative,” Meade said. “For the most part, the rest of the legislators truly appreciate what the teachers do and if people will just stop and pause to think back, they’ll see that it was really the governor and maybe a couple of people that said those things. The rest of us have not.”