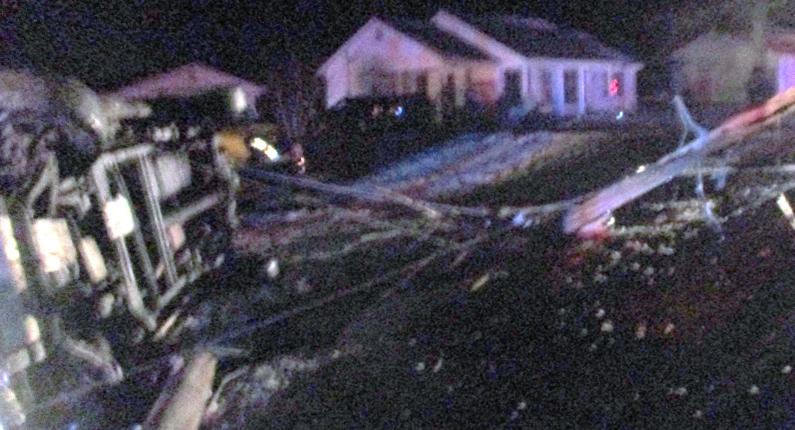 MORELAND — Some residents were without power last week after an alleged drunk driver wrecked into a utility pole.

According to the arrest citation, Mullins responded to Ky. 2141 for a reported white Silverado truck “driving up and down the road at a high rate of speed.”

While on his way to the area, Mullins was informed by dispatch that the truck had struck a telephone pole on Holtzclaw Lane.

When he arrived on scene, Mullins said the truck was on its side and Turpin, identified as the driver, was outside of the vehicle with his feet trapped under the cab of the truck. Firefighters mechanically freed Turpin from underneath the truck, according to the citation.

“Several empty beer cans were laying on the ground,” Mullins wrote in the citation. “I could smell a strong odor of alcoholic beverage coming from the above person.”

Turpin’s speech was allegedly slurred and his eyes were bloodshot, according to the deputy.

Mullins went to Ephraim McDowell Regional Medical Center in Danville where he spoke with Turpin.

“He admitted to drinking Fireball tonight along with beer,” the citation states. “I read implied consent to above and subject refused to talk to an attorney. He stated, ‘I’m slick Willie, I don’t need a lawyer.’”

A mailbox, utility pole and transformer owned by KU and Windstream were destroyed as a result of the collision.

That wasn’t the only damage left behind though, according to Mullins.

“Electrical lines came down and hit a car sitting in a driveway, scratched it up,” he said. The siding on one home was also damaged and some utility meters were pulled from the ground.

Some residents on Holtzclaw Lane were without power for at least four hours, Mullins said, and possibly longer.

Turpin was cited, due to undergoing care at the emergency room, according to the citation. He had a cast on his right leg and was unable to walk without crutches.

Turpin was charged with operating a motor vehicle under the influence of alcohol and failure to wear seat belt.