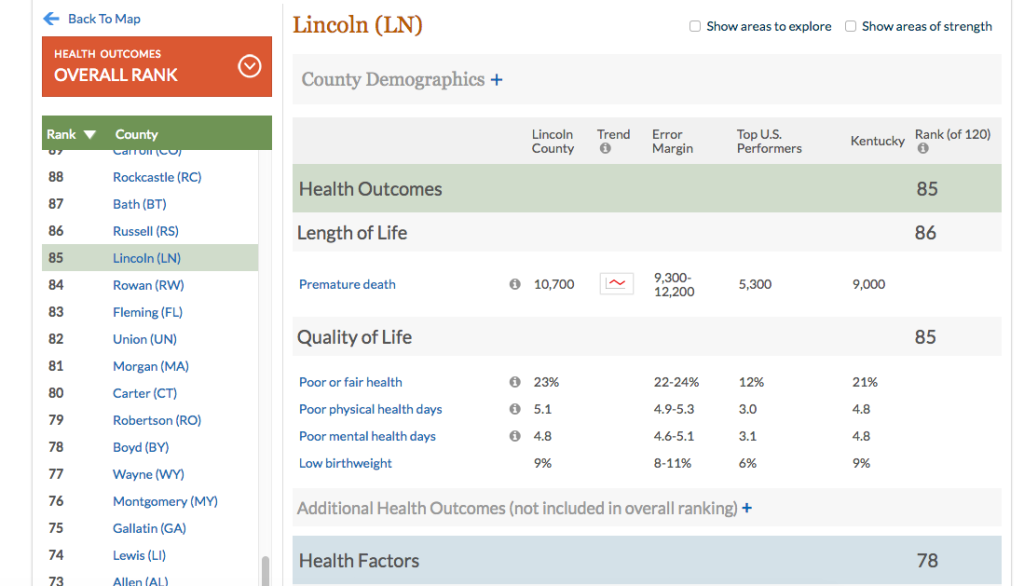 STANFORD — Lincoln County lands in the bottom third of Kentucky counties when it comes to health, according to annual County Health Rankings released earlier this month.

The County Health Rankings are released each year by the Robert Wood Johnson Foundation and University of Wisconsin Population Health Institute; they measure Kentucky’s 120 counties based on an assessment of health outcomes and overall health factors.

The “Health outcomes” category measures length of life and quality of life, while the “health factors” category is broken down into four areas, including health behaviors, clinical care, social and economic factors and physical environment.

Lincoln was ranked 78th out of the state’s 120 counties for health factors such as physical inactivity, unemployment, education and physical environment; and 86th for health outcomes, or length and quality of life.

In Lincoln County, the leading cause of death under the age of 75, according to the data, is malignant neoplasms (abnormal growth of cancerous cells), followed by diseases of the heart, accidents (unintentional injuries), chronic lower respiratory diseases and intentional self-harm (suicide).

Oldham County, the healthiest county in Kentucky according to this year’s rankings, lost an estimated 4,900 years per 100,000 people. Breathitt County, the least healthy county in the state, lost 17,000 potential years.

Lincoln County health highlights from the county rankings include:

• The percentage of Lincoln County children living in poverty has slowly risen from 26 percent in 2002 to 32 percent in 2016.

To learn more about Lincoln County’s health rankings, or other counties, visit www.countyhealthrankings.org.