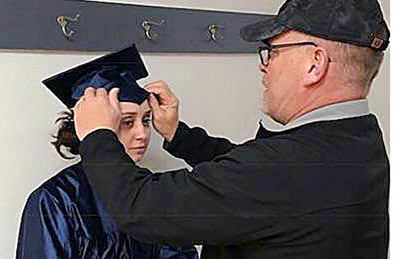 STANFORD – Some Lincoln County inmates will get to trade in their orange jumpsuits for a formal cap and gown next week as they participate in a graduation ceremony to celebrate their educational accomplishments.

Jailer Rob Wilson said when he first took office and spoke to inmates, he realized that employment was a major concern.

“That’s when I really started pushing the GED thing,” Wilson said. “You know, you can’t get a job at McDonald’s or the Dollar Store without a GED.”

For a lot of young mothers in jail, getting their GED is the first step to being reunited with their children, he added.

“Most of your county inmates haven’t reached that felony phase, they’re still in the misdemeanor. So if we can pull them out of that and start helping them being productive, maybe that’ll stop them from getting to that level,” Wilson said.

Wilson said not many people know that he quit high school during his junior year and enlisted in the U.S. Army.

“I got out of the Army a few years later and didn’t have a high school education, so I went and got my GED,” he said.

A few years later, Wilson went to college and earned a degree in Social Science and then became a police officer.

According to data provided by the jail and adult education center, 11 inmates received their GED diploma in 2017 and 22 earned their NCRC. This year, eight inmates have earned their GED to date and 31 have completed the NCRC requirements.

For the last 14 years, Melissa Rolph, an instructor for the Lincoln County Adult Education Center, has been visiting the jail and preparing inmates for the GED and NCRC tests. But in the last two years, Rolph said the programs have really gained traction.

“In the past two-to-three years we have just seen a really strong increase in our numbers at the jail,” Rolph said. “I think the major reason is that Mr. Wilson and his staff have really opened the doors for us to come.”

Rolph is at the jail for three full days a week, she said.

State inmates who get their GED or NCRC have incentives, such as reduced sentence time, Rolph said, but county inmates do not. Despite that, the number of county inmates interested in continuing their education continues to rise.

To celebrate those inmates’ achievements, Wilson said the jail and adult education center will host a formal graduation ceremony in the old Lincoln County courthouse, during which inmates will wear cap and gowns and receive their certificates. Friends and family will be invited to attend, as well as the general public.

“They’re so excited for this graduation,” Rolph said.

Unlike previous graduation ceremonies, which were held at the Lincoln County High School, this ceremony will take place next door to the jail.

“We always do a nice graduation and we always include the jail but sometimes it’s hard to move inmates out to the high school and a lot of times they’ve either transferred to another facility by that time or you can’t get ahold of them,” she said. “I thought, ‘You know, we’re doing such good things at the jail and have such a great partnership, why don’t we celebrate this with fiscal court and the community.’”

When she approached inmates with the idea, they were elated, Rolph said.

Theresa Love, 24, couldn’t fight back tears as she talked about what it means to have her two children and her mother there to watch her receive her GED diploma.

“I’m excited but I’m nervous, because I didn’t think that I would do it, honestly,” Love said.

But she proved herself wrong.

Fellows inmates pitched in and helped tutor Love for the GED test, she said, and now that she’s passed the test, she’s tutoring others who are hoping to achieve the same.

“It’s going to help me get my life together,” Love said. “I want to go to school as soon as I get out of here.”

Love said she wants to go back to school to become a nurse. 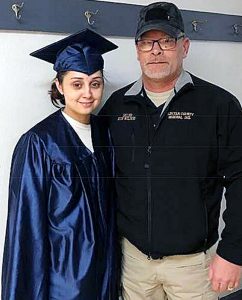 “I really do want to do better,” she said.

Wilson said he plans to take the jail’s program a step further by hiring Love when she is released from custody.

“When she gets out here in the next month or two, I’m hiring her to work the canteen,” he said. “I can stand up here all day and say, ‘we need to give these people a job, we need to give them a chance’ …why don’t I do it?”

Wilson said the work will be mostly manual labor and Love will be supervised and subject to urine tests.

“She got her GED. Now she’s going to have some work experience. It’s something for her to build on when she’s out,” he said.

The public is invited to attend the GED diploma and NCRC graduation ceremony at 6 p.m. on March 29. The ceremony will be held upstairs at the old Lincoln County courthouse. To RSVP call (606) 365-9665.