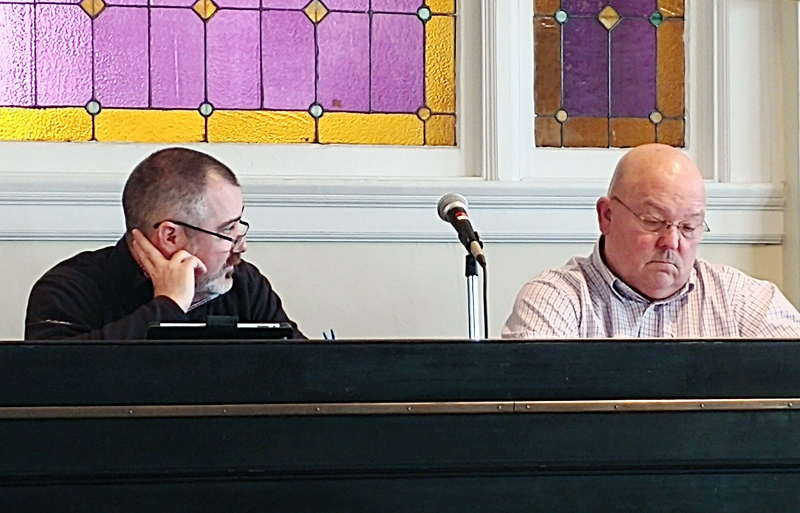 STANFORD — Some private garbage haulers in the county are worried that increased fees at the local landfill will put them out of business, while Lincoln County Fiscal Court magistrates worry that it will lead to an increase in illegal dumping.

“This discussion is about the increase in landfill fees,” Adams said. “What I’d like to do, is for Greg to give us a run-down of where we were and how the increases have progressed through the years – and why the sudden significant increase.”

Butler said fees are increased every year and are effective Jan. 1 each year.

Republic Services had been charging a minimum-ton charge of $14, but that rate was increased by more than double recently.

“Through our corporate process, essentially our folks in Phoenix looked at what we charge at minimum at all landfills across the United States and realized Tri-K was far below what the standard was,” Butler said.

After consideration, the minimum-ton charge was increased to $35, which Butler said is equal to two-thirds of one ton – 1,340 pounds.

“So, the idea is that people bringing less than 1,340 pounds, have to pay that $35. If you bring over that, then you’re charged that per-ton fee,” he said. “What we find is that covers our cost to take that material, put it in the landfill, to pay our employees, pay their health care, to pay the fuel, to buy the equipment, to do all of the things to meet the regulatory requirements of the landfill.”

Butler said because the minimum charge was so low, when people were bringing bags of trash it was cheaper to charge the $13-$14 minimum charge.

“We have always had the per-bag fee, but we’ve never used it because it was so cheap,” he said. “So, what we’ve done in the past couple of weeks is change that. Now we’re charging a per-bag fee to those residents who bring their own trash.”

“So, if you’re bringing five bags of trash from your household, you’re paying $10.50. We think that’s a pretty good deal,” he said. “The private haulers — there are several of them in Lincoln County or who bring their material to Lincoln County. The vast majority bring in more than that .66 tons each time. The average is well over a ton per load.”

At the end of the day, Butler said the increase in charges is an effort to make sure the landfill is making enough money to put the material in the ground safely and efficiently as possible.

“We feel pretty comfortable that this is a fair way,” he said.

Magistrate Johnnie Padgett said he has received several complaints on the rate increases.

Wynona Wallace, a private hauler, said the rate increases could put her and her husband out of business.

“My husband started this business 25 years ago,” Wallace said. “I am trying to keep this business going. I am trying not to raise the prices on my customers. I can go to Boyle County and pay $23. It’s $53 per ton with no minimum. I can go to your other dump in Danville and I can spend $30 to dump and no fees and no extra charges. We’re being charged fees that you’re not charging in Boyle County, although we are hosting a landfill — there’s no telling what’s in it.”

“The straight gate rate is not fair. People are not going to come to the dump with a ton. The average person, even us trash haulers, do not have a ton at a time. It just isn’t fair to pay $40 to come through the gate,” she said.

Butler said the fees in Boyle County are in line with the standards across the states.

“We do average over a ton from our private haulers that come per load. That’s a fact, that’s pulled from the data from the past couple of months,” he said.

“There are approximately 2,000 hauls that come to the landfill from private haulers every year and about 600 of those were underneath the .66 (ton), so about 25 percent,” he said. “We don’t really think this should be impacting our customers to the point that they’re going out of business.”

Legally, Adams said the fiscal court has no authority to tell Republic Services how to set their rates but the county could remove its own fee.

Wallace asked why the fee for construction debris is cheaper than others.

“The regulatory requirements for municipal solid waste is much stricter than it is for construction waste,” Butler said. “Construction is concrete, soil – it’s clean. So, we’re allowed to do different things with it … there’s quite simply less that you have to do with it.”

Butler said there was one day that the landfill set the minimum charge to one ton, rather than .66 ton, but the rate was immediately corrected.

“My main complaint is this minimum rate,” Wallace said. “I have to pay $40 regardless of what I’ve got.”

Wallace added that she loves the employees at the landfill.

County Attorney Daryl Day said he personally doesn’t want to see private haulers leave because he doesn’t want to go back to paying $50 to have his garbage picked up when he can get it for less than half of that.

“And still get the same service,” he added. “They come on the same day, everything is exactly the same as far as my garbage being picked up. The people in the county who use private haulers, they do get a great service and they also get a great deal on what they’re being charged. It is very cheap for a private hauler to pick up your garbage. I don’t want you to go up on anyone, but I want you to stay in business.”

Its not legal for the county to tell a private business how to set their rates, he said.

“I think these guys are working for you, it’s just a lot of these decisions they don’t get to make,” Day said to Wallace. “I don’t think they want you all to go away. I think they want to be open to your concerns. They’ve already done it once — went back to the corporate headquarters and said ‘this is not going to work in Lincoln County, we need to look at something different.’ I think they will listen to you.”

Adams asked if a letter from the fiscal court to Republic Services Inc. requesting a segregated rate for private haulers versus commercial haulers would help.

“i’d like to take it back to our general manager locally and figure out the right way to go about that. But yeah, I think it’s certainly worth presenting,” Butler said.

“I’m a benefit of the small-hauler,” Pruitt said. “I run a store in Crab Orchard and Wallace trades with me on a regular basis and I probably have eight or 10 other haulers who stop and I can see the evidence of them spending money in our community. The only thing I can say, if you’re going to have a price increase of five percent across the board, it should be as fair for the big guys as it is for the little guys. It only looks like y’all have really put a burden on the little guy.”