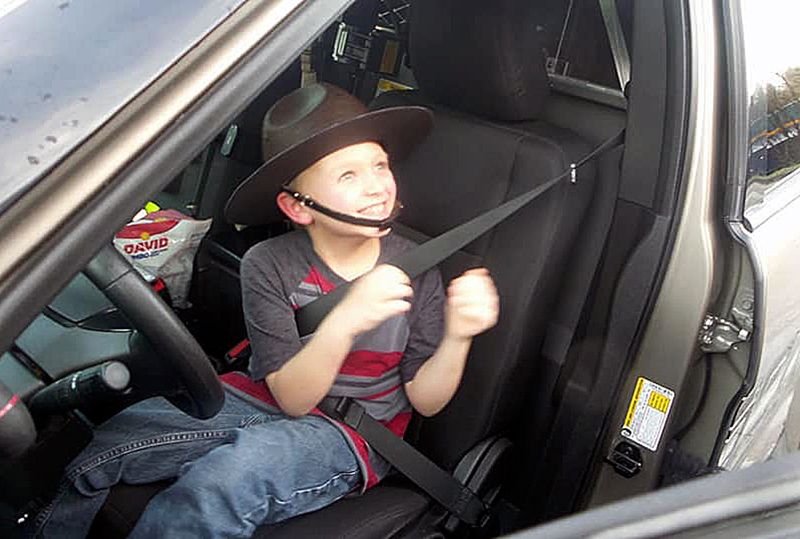 Photo courtesy of Krystal Freeman Kaden, an eight-year-old autistic child, dons a sheriff's deputy hat as he sits in the front seat of a cruiser.

STANFORD – A Lincoln County mother is teaming up with the local sheriff’s office to apply for a grant that could fund a tracking device for her autistic child and others in the community prone to wandering.

Kaden Moore, 8, is considered severely autistic, according to his mother Krystal Freeman, and with that comes the potential for him to wander.

“I don’t really worry about him wandering at home because I have alarms and signs and everything you can think of, but if we’re ever out in public and he manages to jerk away and take off, that could be bad,” she said.

Freeman recently took Kaden to the Lincoln County Sheriff’s Office to visit with Sheriff’s Deputy Michael Mullins, who plans to help her apply for funding through the Edward Byrne Memorial Justice Assistance Grant (Byrne JAG) Program. The program provides federal funding to law enforcement agencies for various programs and can be used for tracking devices for those at risk of wandering.

Freeman said there’s a fragile balance when it comes to familiarizing Kaden with law enforcement.

But spreading awareness about autism in general could go a long way, which is why she took Kaden to visit the sheriff’s office.

“If they (law enforcement) don’t know much about it (autism) how would they know how to react?” Freeman asked. “Kaden is more on the severe end. He does not talk at all. He doesn’t use sign language. He can point to pictures if he really wants to, but what cop carries around a picture book?”

Freeman said being able to recognize “stimming” or, specific behaviors of a person with autism such as hand-flapping or popping a rubber band on their wrist, could be useful to law enforcement agents.

“Kaden bites his hands,” she said. “But all of those are forms of stimming. They’ll beat their chest or hit themselves in the head.”

Kaden’s visit with the deputy was a lot of fun for him, Freeman said.

“It was pretty cool. He turned his lights on and he asked first if it would bother Kaden,” she said. “I said lights were cool but sirens were not.”

Deputy Michael Mullins said he wasn’t familiar with the Byrne JAG Grant Program until Freeman approached him about it.

“There’s some research that I need to do because I have limited knowledge but I hope to work with her and research with her (Freeman),” he said.

Mullins said he enjoyed visiting with Kaden and sees the benefit of educating law enforcement on the tendencies of community members with autism. 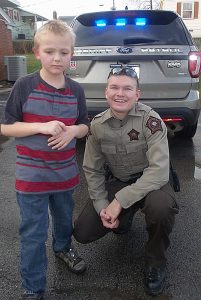 “It’s get him familiar with us, in case we ever interact with him at this age or at a later age,” Mullins said. “They touch base on it a little bit in the academy (Kentucky State Police). We go through scenarios on what to look for, how to deal with impaired people and, while you never let your guard down, you need a little more patience with them.”

“If anyone has a similar situation or has a child with a similar impairment, they’re more than welcome to get with us and bring them by,” he said.