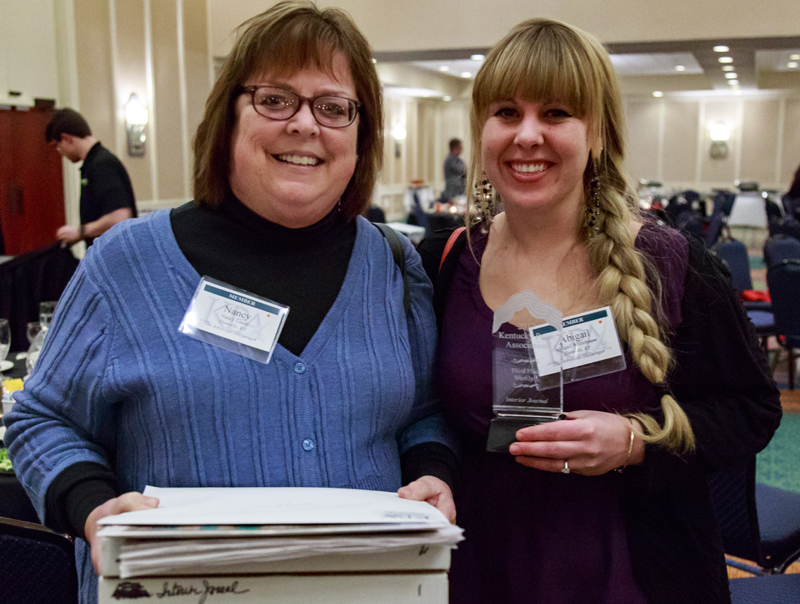 The newspaper brought home third place in General Excellence against similar-sized weekly papers in the state.

A story about a local female farmer titled “From Father to Daughter: Stanford woman carries on family farming tradition” earned the IJ a first-place award in the best business/agribusiness category. “The choice and placing of quotes moves the story along well,” the judges wrote.

The IJ also won second place in the agribusiness category for it’s reporting on a new, high-tech greenhouse operation called Kentucky Fresh Harvest, which located in Stanford in late 2016.

The Interior Journal’s Abigail Whitehouse received a second-place award for “best feature story” for her story on a local “Rosie the Riveter” returning to the plane factory where she worked during World War II.

“This article really brings history to life for a younger generation of readers. The subject of the story sheds light on the fact that life had its challenges during war-time, and also shows how she made the best of it,” the judges wrote. “I love the emotion in this story, and I felt a connection to the lady in the article.”

The IJ’s summer KPA intern, Joshua Qualls, also picked up third place in the “best feature story” category for his coverage of the death of well-known local barber Pat Sanders. The IJ’s KPA intern, Joshua Qualls, also picked up third place in the “best feature story” for his story about local barber Pat Sanders passing away.

“I loved the Mayberry feel of this article. While they do mourn the loss of this man, they also celebrate his life, and embrace the memories made over decades in that barbershop,” the judges wrote. “It almost makes me feel as if I can see these people for myself, and the impact they had on that community.”

“Nice story. You really go in-depth, not only about the race, but about her career to date,” the judges wrote. “How in the heck did she shave 13 seconds off her personal best? Amazing.”

Outside of her sports writing, Leedy also earned a second-place award for “best feature picture” for a photo of young athletes getting schooled on the gridiron.

“Good angle on the photo,” the judges wrote. “Caught a cute expression on the little boy.” Nancy Leedy won an award from The Kentucky Press Association for this photo of Carter Marlow powering his way through the blaster during backs drills at the Lincoln County High School Youth Football Skills Camp.

Other awards earned by the newspaper staff include: