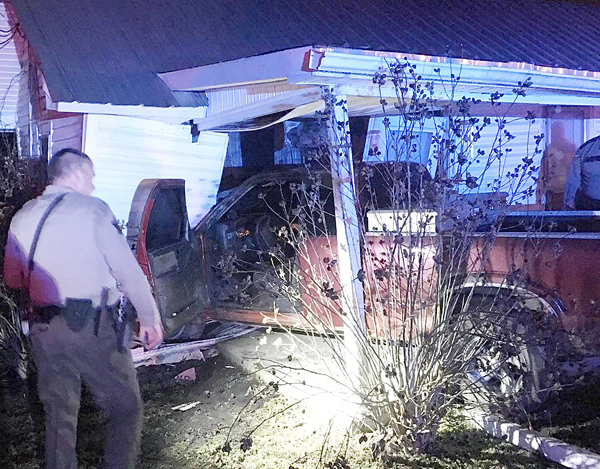 Photo courtesy of the Lincoln County Sheriff's Office Deputies approach a vehicle shortly after it crashed into a residence in Crab Orchard.

CRAB ORCHARD — A man was arrested Saturday for driving under the influence after he crashed his truck into a residence.

It was about 6:45 p.m. Saturday when Crab Orchard Police Chief Jimmy Gipson responded to a report of a truck stuck in a ditch, according to Lincoln County Sheriff’s Deputy Michael Mullins.

Mullins, who also responded to the call, said when Gipson arrived on scene, he attempted to offer help to the driver, who allegedly appeared to be impaired.

“When I got there all I saw was smoke going up in the air,” Mullins said.

While attempting to get the vehicle out of the ditch, Mullins said the driver — later identified as Chris Lamb of Crab Orchard — accelerated and drove straight into a nearby residence.

“The accelerator was still to the floor with the guy in the driver’s seat,” he said.

Lamb did not comply with several loud, verbal commands to put the truck in park and exit the vehicle, Mullins said. Lamb was removed from the vehicle and, after a brief struggle on the ground, was taken into custody.

“At that point the truck was sitting inside a living room. We didn’t if anybody was inside. We didn’t know if anybody was hurt of killed,” he said. “The main thing was to secure the scene, get him away from the vehicle until we could determine further.”

Mullins said neighbors advised deputies that no one was living at the residence, located at 520 Cedar Street, and that it had been empty for some time.

Lamb allegedly admitted to drinking alcoholic beverages that night and appeared “very intoxicated,” according to the deputy.

“The subject stated that he blacked out and didn’t know what happened,” Mullins said.

Lamb wasn’t injured during the crash, Mullins said, and he refused EMS treatment at the scene.

“He was taken to the hospital before being lodged at the Lincoln County Regional Jail, where he was cleared with no injuries,” he said.

Lamb is facing several charges, including driving under the influence of alcohol, reckless driving, failure to wear seat belt, driving without a license and resisting arrest.

Mullins said a substantial amount of damage was done to the house but it did not appear to be a total loss.