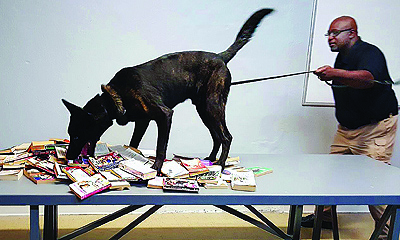 To make that happen, the sheriff’s office is asking for help from the public to secure a grant from the National Association of Chiefs of Police (NACOP), which will match every dollar raised locally, up to $5,000.

The goal is to purchase a single-purpose, narcotics detection dog, according to Sheriff’s Deputy Michael Mullins, who would be the K9’s handler if that goal is achieved.

Mullins started with the Lincoln County Sheriff’s Office as a special deputy in 2013 and in 2016, became a full-time sheriff’s deputy. If enough funds are raised, the sheriff’s office plans to purchase a Labrador K9 from Southern Coast K9 in Florida.

“That’s where the (Lincoln County Regional) Jail’s K9 came from and that’s where all three of our previous dogs came from,” Mullins said.

Both Mullins and the dog would participate in a two-week handler’s training course in Florida before returning to Lincoln County, ready to work. Mullins said he plans to continue to train alongside Stanford Police Department’s handler Preston Middleton and his K9 Nico, as well as the Lincoln County Regional Jail’s handler Robin Jones and his K9 partner Django, when he arrives back in Lincoln County.

“He’ll be used to find illegal narcotics, whether that be during traffic stops or building searches, we’ll be able to assist other agencies with school searches in different counties,” Mullins said. “The plan is to work a lot of what we call drug interdiction on the highways, drug investigations.”

“Essentially, if you don’t get consent to search a vehicle during a traffic stop that you believe came from high drug-trafficking area, you can conduct a K9 sweep of the vehicle,” he said. “If the dog alerts, that establishes probable cause for a search.”

Mullins said while Sheriff Curt Folger and his K9 partner Akim typically work during the day, adding another K9 to the department would allow deputies to provide narcotics detection during night shifts, as well as assist other agencies at various times, if needed.

“It’ll allow us to find the drugs, get them off the street before they get to the kids,” he said. “No one wants to be arrested but if we get these people arrested, go through the court system, we can maybe get them some help if they need it.”

In a brochure detailing the fundraiser and K9 program, a letter from the sheriff details the need for the new drug detection dog and the benefits it can bring to the community, which include reducing the threat of serious injury or even death of an officer and assisting officers in finding illegal drugs.

“I believe this project is an investment in our community,” Folger wrote. “It is my hope and desire that you will join in our cause.”

The organization voted last week to donate an initial $100 to the K9 cause and, according to Chairwoman Andrea Miller, the group is teaming up with AmeriCorps members — elementary school tutors who focus on math and drug abuse — to organize a fundraiser for students to contribute to the K9 program.

Each elementary school will compete in the “Penny War” to see who can raise the most money to help pay for the new K9. All funds raised through the schools will be matched by the Lincoln County Fiscal Court, Miller said. Students are encouraged to bring their pennies, nickels, dimes and dollars to their homeroom teacher by Feb. 26.

“This dog will be used countywide, so we’re excited that we were able to gather funds from the entire community,” Miller said.

There are ongoing costs associated with K9’s, Mullins said, including food, training, veterinary care, supplies and equipment. Donations received during the Feb. 1-Feb. 28 fundraiser will be used to purchase the dog and cover these ongoing costs, he added.

“Donations are 100 percent tax-deductible and NACOP will send out a thank you letter as well as a form for tax deduction,” he said.

At the end of February, all of the donations will be sent to NACOP and the organization will then issue a check, including the matched funding, to the sheriff’s office.

“One of our local businesses, Lincoln Tool & Die, has agreed to outfit our vehicle,” Mullins said. “If we raise enough money, (we’re) going to buy the materials and they’re going to do the labor on it.”

Local church leaders have also expressed support for the cause and a fundraiser has been scheduled for Feb. 17 at Grace Fellowship Church from 5 to 8 p.m.

“It’s going to be a gospel singing and chili supper,” Mullins said.

Donations to the K9 Assistance Program will be accepted during the month of February and can be dropped off or mailed to the Lincoln County Sheriff’s Office at 104 N. Second St., Stanford, KY 40484. Make all checks payable to NACOP.