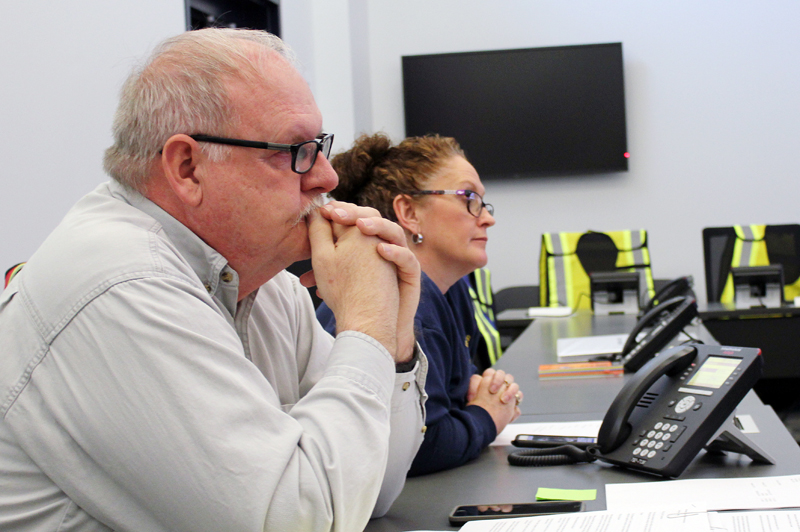 LANCASTER — It took nearly five years for the courts to determine that fees placed on water meters to fund 911 communications is constitutional but the issue is back in court now that a new lawsuit has been filed, this time questioning the collection of those fees.

According to members of the Bluegrass 911 Board, the new lawsuit was filed by the Garrard County Water Association (GCWA) and questions whether the fiscal court can force a private company like GCWA to collect the fees.

Bluegrass 911 Director Russ Clark said during the board’s Jan. 3 meeting that a court hearing was scheduled for Jan. 2 but was postponed since Circuit Court Judge Hunter Daughtery hadn’t read the 911 board attorney’s response yet.

Lincoln County Judge-Executive Jim Adams said Lincoln County still plans to move forward with the fees. Adams said letters have been drafted and will be sent to water providers in Lincoln County, instructing them to begin collecting the fees Feb. 1 — a month later than the county had originally planned.

Board member and Garrard County Fiscal Court Magistrate Joe Leavell asked what action would be taken if the water providers refuse to collect the fees.

“Daryl (Day) suggested to us that we go ahead and proceed with our request for the funding on the water service, not the meters themselves because there was some question about meters that weren’t in service,” Adams said. “We’ll go ahead and start it and if we have a lawsuit filed, which is a possibility, then we’ll go from there.”

Lincoln County Attorney Daryl Day, also present at the Jan. 3 board meeting, said no lawsuits have been filed in Lincoln County but the possibility for future litigation exists.

Now that the fee has been deemed constitutional by the Kentucky Court of Appeals, Day said the new lawsuit questions the constitutionality of the county forcing water providers to collect those fees.

“The first was about is the fee even allowed. Now this one is basically saying, even if the fee is allowed, the easiest way to put it is, can we make them collect it and turn it over to us?” Day said.

Adams said GCWA might approach the Public Service Commission (PSC) but added that not all water providers are governed by the PSC.

In his legal opinion, Day said the PSC only regulates rates.

“Their big thing on money is, can you justify a rate increase. Does it cost you so much to do business that you need more money to be able to do business?” Day said. “This has no effect whatsoever on the water rates. The only effect of this would be whatever amount they’re allowed to keep to cover their cost. Basically, as long as we let them keep enough that their cost to collect it and remit it to us is zero, then it has no effect whatsoever on rates. It’s not costing their water company for them to do this and they’re not making money off of doing this — that’s the happy medium.”

• Heard an update from Clark on recent grants. Clark said Bluegrass 911 was awarded three grants for a total of $92,000 for some new equipment and equipment upgrades. “Everything has been purchased and installed and up and running. I’m just waiting getting cancelled checks to send into Frankfort to get reimbursed,” he said. “We’ll get about $62,000 of that $92,000.”

• Approved a new sick leave and absenteeism policy. Clark said the former policy was not very stringent. “They’ve been able to use it for more personal days than actually being sick,” he said. “It’s been abused occasionally and I think we need something in writing that has a little teeth in it.”

Clark said the agency is also seeking a new certification for the dispatch center through the Kentucky Chief of Police Association and updating the policy is part of that ongoing process.

Board Member Joe Gilliland called for a stricter policy than the one approved.

Deputies arrest man after pursuit in vehicle, on foot