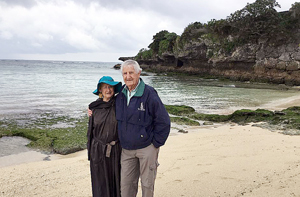 Photo contributed Young and his wife, Janice, pose for a photo in the bay where Young helped lay a smoke screen during WWII.

Editor’s Note: Local veteran and author D. Ralph Young plans to share his experiences with The Interior Journal as he returns to three of the four islands where he served in combat during World War II. This is the second and final report from Young.

It is on to Okinawa but with some regret because the Chamorros, who inhabit the island of Saipan, were so friendly and grateful that America gave them their freedom. 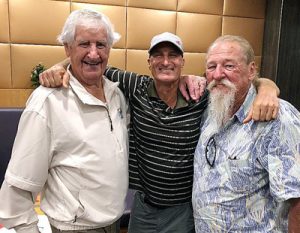 Photo contributed
Here, Young takes a picture with a male Chamorro and a local guide.

My wife Janice said all these years, she thought that our US soldiers were in the South Pacific to defend America. However, during this trip, she learned that we were also there to liberate the island people of the South Pacific – and they are so grateful for that. I had the urge to just stay and enjoy the handshakes and hugs that flowed so freely. 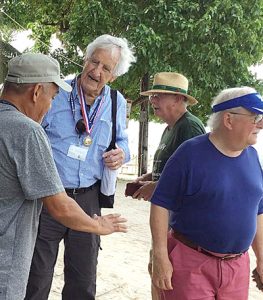 The Battle for Okinawa was fought from the beginning of April to mid-June, 1945. There were two other major events during this time that reduced the public awareness of the intensity of this battle:  the celebration for VE day in Europe and the death of President Roosevelt. These events were but one more reason for me to write my book “Forgotten Warriors.”

Photo contributed
Here, Young receives a hug from a female ex-representative of the local government.

The Japanese had initiated the Kamikaze attack at Leyte and it became one of their most important weapons at Okinawa. Admiral Spruance began the battle with the Cruiser Indianapolis as his flagship. After taking a direct hit by the Kamikaze, he switched to the battleship New Mexico which was also hit by a Kamikaze. I think his comment that “Okinawa was the toughest experience of the war” was justified.

Another ship, the destroyer Laffey, faced 22 suicide planes in a little more than an hour. Six of the planes hit the ship but the destroyer survived.

My initial responsibility during the battle was to lay a smoke screen covering the bay to hide the ships. We escaped quite well with only one wounded sailor out of our group.

After this phase of smoke screening was over, I went back to being the Gun Captain on the aft 40mm anti-aircraft gun on the USSA J. Franklin Bell. Our goal was to shoot the enemy down before they could fly into a ship. 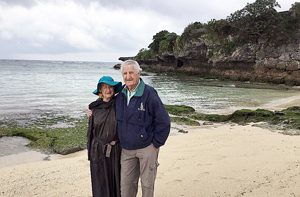 Photo contributed
Young and his wife, Janice, pose for a photo in the bay where Young helped lay a smoke screen during WWII.

While on the island, our tour group visited Hacksaw Ridge and listened to our guide tell us about the many liberties the movie took as related to what really happened. 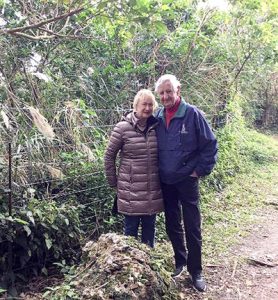 Photo contributed
Desmond Doss lowered the wounded men
over Hacksaw Ridge right behind the rock
where Young and his wife Janice stand. A fence now protects the area.

But nothing the movie portrayed took away from the heroic work of Desmond Doss who was awarded to Medal of Honor for his action.

We also visited the many caves that were used during the war. Some were in the jungle and others in populated areas, such as the Japanese Naval Command, which was deeply underground and held many passages. 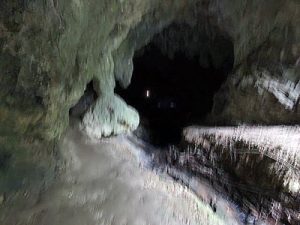 Photo contributed
Pictured here is the cave where 1,600 natives hid for over 90 days.

Our guide told us the story of how 1,600 natives were hiding in a cave for over 90 days and would not come out when our US Marines called for them to do so. Finally, one native came out with his hands up saying, “Don’t shoot.”

He told the American soldiers that he had been an island soldier and that he knew the people inside the cave were afraid of the Americans because of the propaganda they had received. He requested a little more time with the frightened natives so he could convince them to come out and be rescued.

Additional time was granted and the island soldier was credited with saving the lives of 1,600 people.

It was a great trip for Janice and me, sponsored by Beyond Band of Brothers, a Tour Group based in Budapest, Hungary with a satellite office in Lexington,  Kentucky. I enjoyed every minute.