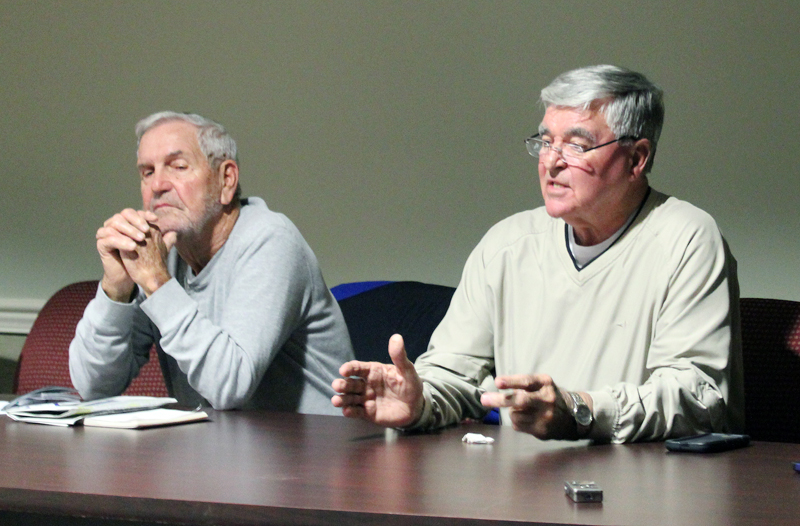 STANFORD – Another attempt to resolve a billing debate between Stanford Waterworks and the McKinney Water District failed this week as both parties left the meeting without reaching an agreement.

Both the McKinney Water District Board and the Stanford Water Commission remained in separate executive sessions Tuesday night for about an hour-and-a-half.

Stanford’s attorney Jonathan Baker remained with the group of McKinney representatives, as well as their attorney Fred Short, as they attempted to resolve a dispute over a water bill raised by McKinney earlier this month.

The McKinney Water District maintains that Stanford owes it close to $39,000 for over-billing during the first five months of this year. The dispute in billing stems from a water meter failure that occurred in mid-January and wasn’t repaired until May.

The crux of the debate rests on how the total was calculated, based on the contract between the two entities.

The contract reads: “If any meter fails to register for any period, the amount of water furnished during such period shall be deemed to be the amount of water delivered in the corresponding period immediately prior to the failure, unless Seller (Stanford) and Purchaser (McKinney) shall agree upon a different amount.”

Following the executive sessions Tuesday night, Short addressed the Stanford Water Commission, asking them to justify the numbers used to calculate the bill for McKinney.

“I just wanted to state that my clients came here in good faith to sit down and talk to you all face-to-face about this issue. My clients have repeatedly asked for a justification of the numbers that were put on the invoices,” Short said.

Stanford Water Chairman Jack Withrow said the discussion took place during executive session and there was no reason to go back through it.

“That’s why we came. I just wanted you to know that that’s why we were here. We want to talk to you face-to-face about it and we want a reason,” Short said. “We want to know why we’re in the hole and nobody wants to acknowledge that.”

Baker said Tuesday night’s meeting was the fifth meeting between the two parties.

“We’ve done that in the first three meetings and this one was really just trying to get a resolution to move on and I just don’t think, unfortunately, it didn’t happen,” Baker said.

Short said an agreement wasn’t reached because Stanford won’t acknowledge that a mistake was made in the billing.

“These numbers are a mistake. All you’ve got to do is say ‘We made a mistake, we over-billed you, here’s a credit, here you can have the water.’ Then we’ll even up and we’ll all be on the same page again,” he said. “…It’s beyond me that you all won’t acknowledge that, that you won’t acknowledge that your invoice for one month was double what it was for last year, the year before. It was $12,000, and then you generate one for $25,000 and don’t want to tell us why.”

The inability to resolve the issue is going to cost both sides, Short said, and it’s a cost he says is unnecessary.

Following the departure of the McKinney Water District representatives, Stanford Water Commissioner Alvie Atwood said since no resolution has been agreed upon, the issue will have to be settled by the Public Service Commission (PSC).

“All we can do is let somebody else do the settling now and let them make a decision instead of us,” Atwood said.

Baker said Stanford has made “extremely generous offers and haven’t received anything in response” so the next step will likely be to contact the PSC. He said since he has never worked with the PSC, another attorney will likely represent Stanford Water.

“I’ve never done it and I don’t want to go in the first time and guess on how to do something,” he said.

Stanford Water Commissioner Danny Bertram said he’s still holding out hope that the issue will be resolved before having to turn to the PSC.

“We won’t meet again, probably. We may exchange letters back and let them know our offer is still there if they want it but I don’t think a meeting…this is the fifth meeting we’ve had,” Baker said.