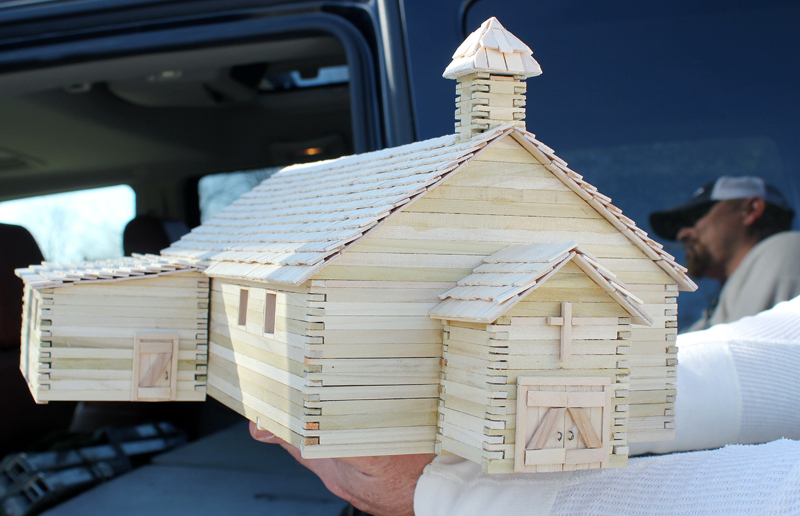 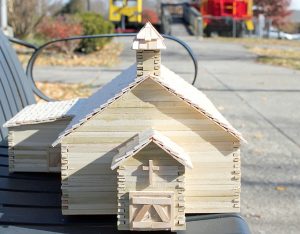 Photo by Abigail Whitehouse
The scaled replica of Mount Hebron Baptist Church in Ottenheim not only mirrors the exterior of the building, but has pews and a pulpit inside.

OTTENHEIM – Mount Hebron Baptist Church is home to many of Jeremy Garrison’s fondest memories – it’s where he was baptized, where his parents were married.

Those memories, coupled with a passion for history, were the inspiration behind Garrison’s artistic replica of the church, he said.

It took about 74 hours, spread out over a two-month period, for Garrison to piece together a quarter-inch scale model of Mount Hebron Baptist Church, located on Chestnut Ridge in Ottenheim.

Garrison said he has done smaller, similar projects in the past but this is the first of this scale and size, he said. It turned out better than he expected, too.

“Of course, it’s brick now. It was siding when I was a kid. I’ve always liked the old-timey stuff so I put it back to log and wood shape,” he said. “It’s just a hobby. Some people have asked if I build them to sell but it’s just memory and history.”

The replica also includes the Sunday School addition to the building and a quick peak inside the small windows show several rows of church pews and a pulpit.

“Peak in the windows, that’s the real surprise for everybody,” he said. “I put a pulpit, pews, interior doors and everything. The Sunday School room off to the side has benches and a podium in it with interior doors.”

The handles on the doors are made from bread ties, he said.

“I tried to get as much detail, at least. Even the shingles are off-set like they’re supposed to be and they’re actually capped from the west and everything. That’s 1,828 of those little babies that I cut each one, filed and put in,” he said laughing. “That was the hair-pulling part.”

It took nine bottles of Gorilla Super glue to piece the whole project together, he said. The hardest part was putting the steeple together, which he said took about five hours alone to finish.

His favorite feature is the cross over the front doors, Garrison said.

After receiving such a positive response to the church replica from family and friends, Garrison said he already has his sights set on a second project now.

“I actually have the blueprints for Fort Logan, so I’m going to start building the fort on a quarter-inch scale,” he said. “I look forward to that project very much.”

As a full-time officer for the Stanford Police Department, Garrison said working on his projects at home help relieve a lot of stress.

“I enjoy it. It’s a stress reliever to me,” he said. “The enjoyment I’ve gotten so far in making this, is the people that actually know the church. They recognized it right off, that makes me feel real good and to just see people get enjoyment out of it…when friends and family see it and enjoy it, that makes my day.”

Garrison said he hopes to replicate his grandmother’s log cabin and several other historical buildings in the area in the future. 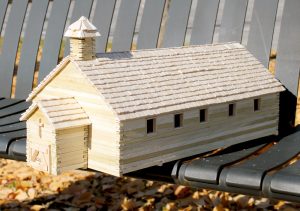