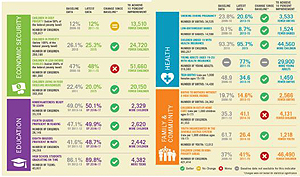 STANFORD – There are fewer Lincoln County children living in food-insecure households today than there were five years ago, but more children are living in “deep poverty,” according to an annual report that measures overall child-well being across the state.

The 2017 report differs from previous years as it sheds the overall ranking of each county and, instead, shows which measures have improved or worsened over a five-year period.

Lincoln County saw improvement in nine of the well-being indicators over the last five years, according to the data.

Lincoln County also saw an increase in the percentage of children living in low-income families – a household of four with an annual income of $48,072 or less.

Income is one of several factors when it comes to educational success, according to Kentucky Youth Advocates.

Other improvements in the data were found under the health measures as there was a decrease in the number of teen births in Lincoln County as well as the rate of births to mothers who smoked during pregnancy.

More Lincoln County children under the age of 19 have health insurance now compared to 2010 with the percentage increasing from 92.7 to 95.3 over the last five years.

The data also shows 63% of young adults, ages 19 to 25, in the county have health insurance.

The rate of children who live in out-of-home care due to abuse or neglect increased in 88 Kentucky counties, according to the data, and Lincoln County was one of them.

For every 1,000 children under 18 years old, 32.6 are in out-of-home care due to abuse or neglect. Data shows an increase of 11.7 percent over the last three years in Lincoln County compared to the previous three-year period.

Grandparents and other relatives raise seven percent of Kentucky’s children, according to the report, which is the highest rate in the nation.

Lincoln County did, however, see improvement in the other three indicators under the “family and community” measure.

There were 4.3% fewer birth to mothers without a high school degree in the last three years, and 13.8 percent fewer children were booked into a secure juvenile detention facility. The percentage of children living in high-poverty areas also improved as it decreased from 76% in 2006-10 to 60% in 2011-15.

This year’s report also differs from previous county and state profiles by showing the number of children who would be impacted if the state or county improved by 10 percent on each measure.

For a closer look at county-by-county data, visit http://datacenter.kidscount.org/data#KY.