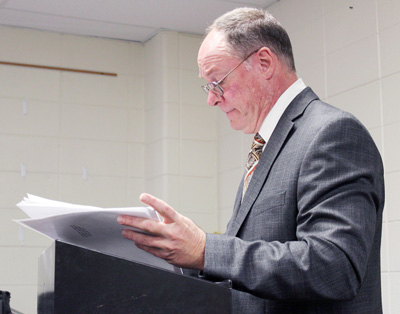 “At the end of the year, the district had a total current assets of $7.1 million, that’s down $3.9 million from the previous year,” Montgomery said. “But in 2016 you had $4 million of insurance proceeds that were used this year for construction so that accounts for the $3.9 million reduction.”

“The liability is $11.4 million for this district. That is this district’s proportionate share of the County Employment Retirement Systems,” he said. “We’re required to show your portion of it. That is not something you will be writing a check for or something they’ve got scheduled for you to pay. But it is part of your financial statements, which is why your net position is less than it should be.”

Again, the drop is due to the significant amount of insurance proceeds the district received for a fire that occurred in 2014, he added.

Total expenses for the 2016-17 school year were $44 million, which is down $1.8 million from the prior year, Montgomery said.

“Your real number is, you had a profit in food service of $289,539 this year, which is excellent position to be in,” Montgomery said.

Montgomery said it appears that participation has increased, especially for breakfast.

“What’s happened is, your participation has gone up, and kudos to your foods service people for getting that done,” he said. “As long as that happens, then you’re going to have these type of good years, which means the district can start taking an indirect cost transfer where food service will reimburse the general fund…we’re in a position where, looking at 2017-18, if you’re having this kind of year then I would have no qualms with that taking place.”

Montgomery said for a district the size of Lincoln County, any time there is a positive over six figures then the district is looking at “a very good year.”

“We did have a finding of ‘question cost’ last year, if you remember,  had to do with maintaining time relative to a person working in a federal program where the time was not documented but the federal government says you must,” Montgomery said. “We have revisited that, as we are required, and that has been corrected and…the time is being properly documented to justify the charge to federal rewards.”

Chairman Tom Blankenship said the 2016-17 audit is one of the best he’s ever seen in years.