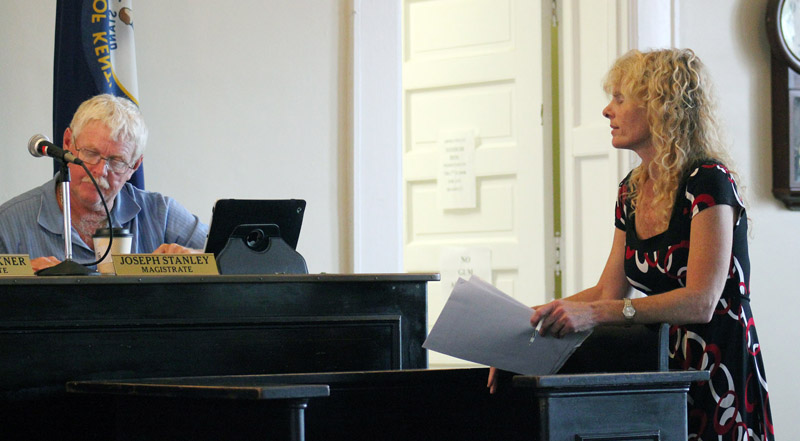 STANFORD – The Lincoln County Fiscal Court heard suggestions from a few animal advocates last week on how to improve the local animal shelter.

Melissa Bowman, president of Kentuckians Vote for Animals, presented magistrates with a letter that was sent to Lincoln County Judge-Executive’s office in May. Bowman requested to speak during the fiscal court’s Oct. 10 meeting after the letter received no response, she said.

Bowman said volunteers from the animal advocacy group visited the Lincoln County Animal Shelter and were pleased to find animals had clean areas, as well as food and water.

While animals had adequate water inside the kennels, Bowman suggested also providing water while animals are outside.

One concern Bowman expressed on behalf of the group was the euthanization of animals that could have been saved by rescue groups.

“There have been several occasions in the last months where animals in the Lincoln County shelter that had rescue commitment, and the shelter employees were aware of the commitment, (but) the animals ended up being euthanized regardless,” Bowman said. “I know a couple of those times they had said the animals seemed to be sick, had diarrhea, and I guess they were afraid of the illness.”

Diarrhea in animals can be caused by worms or parasites, which are easy to treat, she said. Minor vaccinations upon intake of animals could help alleviate some of the sickness at the shelter, she added, as well as quarantining dogs received from Casey County, which are often sick when they arrive.

“A good rescue, If they make commitment to an animal and the animal is sick, they will pull the animal and take care of them,” she said. “So, just get maybe an agreement, if the shelter employees have an animal that’s sick, maybe pick up the phone and let a volunteer know so they can get them to a vet rather than putting them to sleep.”

The shelter, currently charges $60 for male dog and $70 for female dogs, which includes the cost of spay or neuter services, as well as a rabies vaccination, according to Judge-Executive Jim Adams.

“We would like to make Lincoln one of the top-20 shelters in the Commonwealth, versus where it’s currently at, and I think we can do that if we all maintain open lines of communication.”

According to a 2016 study by the University of Kentucky and Lincoln Memorial University College’s Veterinary Medicine Departments, Lincoln County’s shelter was one of 26 shelters identified as needing the most help.

Jones, who has written and received a $1,000 grant for the Lincoln shelter previously, said she’s attending a grant-writing class next month and hopes to gather more grant-funding in the future.

Adams asked what a reasonable adoption fee would be for already spayed or neutered animals. Jones said some shelters waive the adoption fee entirely but if vaccinations are provided upon intake, rescue groups are often charged about $10.

Dawn Walker, who works with multiple animal shelters across the state to coordinate rescue efforts, submitted an open records request to the fiscal court Tuesday morning with 25 specific requests listed.

Within the request, Walker asks for copies of the allocated funds for the shelter from July 2015 through July 2018, with a breakdown of veterinary care, cleaning, animal food, maintenance, salary/wages, utilities, supplies and equipment and gasoline.

“This information that we’re seeking is solely so we can kind of evaluate some of what’s going on in the shelter, where some of the funds are going, how some of the numbers are turning,” Walker said. “The shelter is one of the nicer shelters. It is kept and maintained well, but as they said…there are some things that could potentially be improved.”

“We’ll get these requests to you, it may be more than the three days,” Adams said. “I’ll scan and email those to you as we get them. We have the treasurer out this week on Fall Break…it may take us a while to get these together. What I can get together myself I’ll email to you.”

Walker also suggested the county consider a volunteer coordinator for the shelter to help with communication and rescue efforts.

As of Oct. 18, Walker said she had not received a response to her request. Kentucky Open Records law requires public agencies to provide a written response to open records requests within three business days. If the public agency needs longer than three days to fulfill an open records request, the agency is required to provide a written response that details the reason for the delay as well as the earliest date the records will be available.