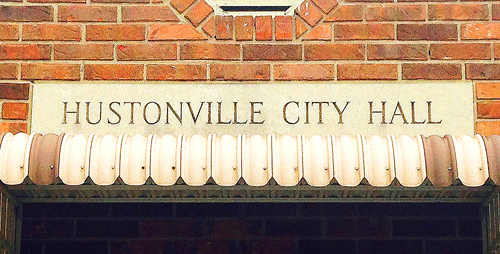 HUSTONVILLE – City Council members have voted to form a new, three-person committee to review alternative plans for a fire and emergency services building in the city.

Last month, council members met with a representative from architectural and engineering firm Brandstetter Carroll to determine what could be cut from the original building plans after the project bids came back higher than what the city had budgeted.

With councilman Alan Sims acting as Mayor Pro Tem Tuesday night, due to the illness-related absence of Mayor David Peyton, council members continued to discuss alternative solutions to project issues and inquired about the total amount of bills related to the project that have been paid.

Since the beginning of the project planning, some of that total budget has been spent to pay bills for preliminary tasks, which council members inquired about during Tuesday’s regular meeting.

As of last month’s meeting, the changes and reductions made to the building plans had reduced the cost down to about $914,300 – still more than what the city has budgeted – but would leave additional work left to be done by the city in the future. The council discussed the possibility of hosting fundraisers at the new fire department to raise money for those future costs.

Councilman Marc Spivey questioned the city’s decision to continue to pay architects for new drawings when the goal of reducing the cost has not yet been met.

“So we’re sitting here writing checks out to these people and we’re still not getting any results from this architectural firm as to appeasing our wishes,” Spivey said.

On Wednesday, Peyton detailed the bills related to the project that have been paid to Brandstetter Carroll as of this week – a total of $49,112.50. Peyton said the costs are related to preliminary tests, blueprints and new drawings.

Other bills that have been paid as of this week include: fee to submit plans to Kentucky State Treasurer Office, $2,082.60; Lincoln County Construction Department, $350; core drilling to check foundation, $5,250; required advertisements, $830.19; first topographical survey, $2,812.50 and the second topographical survey, $697.50.

“There’s a limit to how much we can give to the fire department, that’s just my opinion,” said Councilman Jimmy Evans. “At some point there is a limit to what we can pay.”

Spivey said the city has already given the architectural firm more than $44,000 for nothing.

“Seems to me every time we go back to the drawing board to reduce down the initial cost of getting this building built we are being charged every time. I do understand that time is money and they are a business, it’s a business,” Spivey said. “But are they charging us every time they re-slate these blueprints? Do we know this? I don’t.”

Sims suggested the council also consider an alternative plan for fire and EMS in the city. Instead of constructing a new building, Sims suggested seeing if the city could trade the donated property designated as the future site for the new building in exchange for the old First Southern National Bank building. Sims also mentioned the “Burtch Hester building” that sits across from PBK Bank on Main Street.

Spivey said that has been suggested by citizens, as well.

“The only thing we do have to find out for sure, is if we’re entitled to this grant money if it’s not a new building,” he added.

Sims said the city could renovate the former FSNB building to house city hall, police and water department offices, as well as the other building in the city to house the fire and ambulance vehicles.

Spivey suggested the city appoint a three-person committee to investigate the alternative plan and see if it would be possible under the current grant and loan contracts.

“We don’t need just one person going at this solo to bring back reports,” he said. “…Three heads think better than one…”

City Attorney Jonathan Baker said it is “extremely unlikely” that the grant and loan contracts will allow for the city to buy existing property.

Baker suggested the council contact Rural Development for specifics on the loan.

Sims said while he was the one to suggest the alternative, he believes the mayor should be involved in the appointment of a committee.

“No, I disagree,” Spivey said. “We are a council. We are a governing body, same as the mayor. The mayor does not have sole say-so on everything that goes on in this city…we are here to council. We have a constituency, which are the citizens of this city. We have just as much say-so as council people of this city as the mayor does. So I think we can (form) this committee without the mayor’s say-so.”

Spivey made a motion to create the three-person committee which was seconded by Evans. Council members Dudley Hardin and Jimmy Lane voted against the motion. Another motion was made by Spivey to accept the committee, which will include council members Cecil Maddox, Spivey and Sims. Lane also voted against that motion.

“We’re in the business to save water customers all we can and do the best we can for Hustonville,” Evans said.

Peyton said Wednesday that the council created a new committee while there was already one in place.

“We created a committee when this project started,” he said. “Myself, Jimmy Lane and Brad Smith (former council member) representing the City of Hustonville and Ashley Powell and Jeff Godbey representing Lincoln County EMS. We have not disbanded that committee.”

The Burtch Hester building, he later added, is a 70-year-old dilapidated building that would cost quite a bit to bring into service.

“The CDBG grant was written for construction of a new facility and cannot be used to (rehabilitate) an old building,” he said.

Peyton said he also has concerns about multiple council members gathering outside of city hall following the council meetings to continue the discussion of public business – an open meetings violation if a quorum of members is present.

“It’s also going to be brought up about their little meeting after the meeting last night,” Peyton said. “That’s not quite legal, once you have a quorum. Back at the table, that’s where we conduct city business, not outside, not at somebody’s house.”

The Interior Journal will be filing a formal open meetings complaint this week.