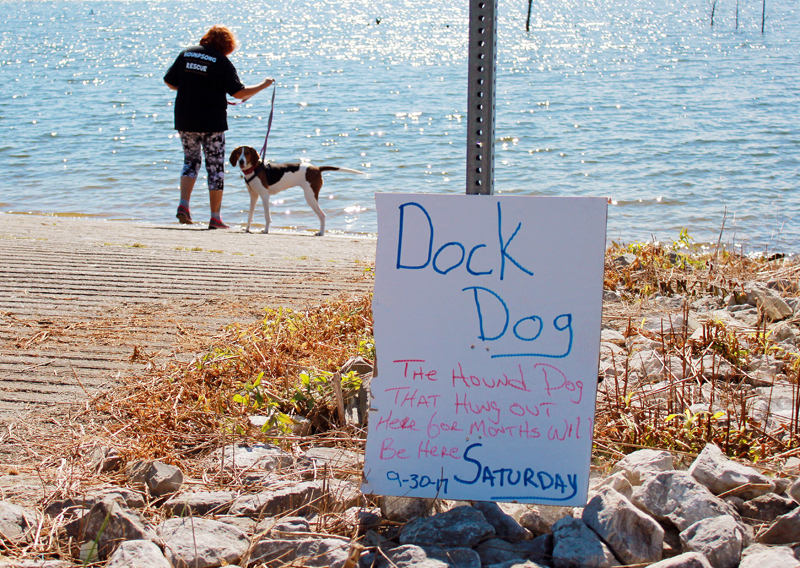 CRAB ORCHARD – A familiar canine face was at the Old U.S. 150 Cedar Creek Lake dock last weekend – the place she called home a year ago before being rescued.

Cedar, now a happy and healthy Coonhound, was once known as the Cedar Creek “Dock Dog” to many in the area. While she didn’t belong to anyone, Cedar was cared for by many who lived nearby or frequented the lake and for six months those were the people who kept her alive.

For six months, many tried and failed to catch the coonhound – that is until a couple from Chicago, Roberta and Darin Lee, came across her while they were vacationing in the county. 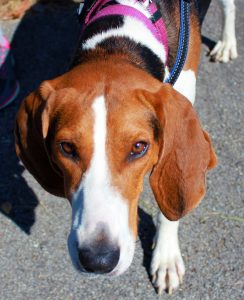 “We pull up and this dog is limping up the boat ramp,” Roberta said. After being told the hound was a stray and impossible to catch, the couple spent the rest of their vacation trying to win her over and take her home. They weren’t able to get it done, but they went home, formulated a plan and returned to Lincoln County with determination.

With help from Lincoln County local Martha Dee Bastin, who brought a horse trailer to help corral and catch the canine, the group was able to get the hound into the trailer and take her with them for rescue and rehabilitation through their organization Houndsong Rescue.

It took about six months for Cedar to adjust to her new life away from Lincoln County, Roberta said. Cedar now lives with Lori Marschke, also with Houndsong Rescue. 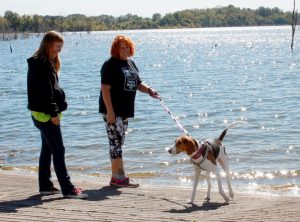 As the group returned to the the Old U.S. 150 dock Saturday, they reminisced about their fateful meeting with Cedar and how amazed they were by the community’s support for the stray dog.

“Being from Chicago and being in rescue, the thing you always hear is how people down south don’t care about their animals,” said Darin Lee. “But this was the best-fed stray dog I’ve ever seen. She had steak and lobster, her choice of a dozen foods.The whole dang county was coming here.” 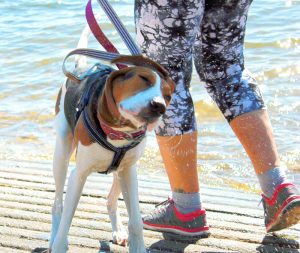 Photo by Abigail Whitehouse
Cedar, formerly known as Dock Dog, shakes off some water at the Old U.S. 150 dock at Cedar Creek Lake.

Roberta said when they left with Cedar a year ago, they knew those who had come to love her – like Conner Hutti, Melanie and Matt Hutti’s son who fed her every day – would be worried to find her gone.

“When we left that day, because we knew so many people had fed her, we left a sign here in the grass that said ‘the coon hound is safe’ and left our phone number on the sign,” she said.

“That’s when we knew we had to bring her back.”