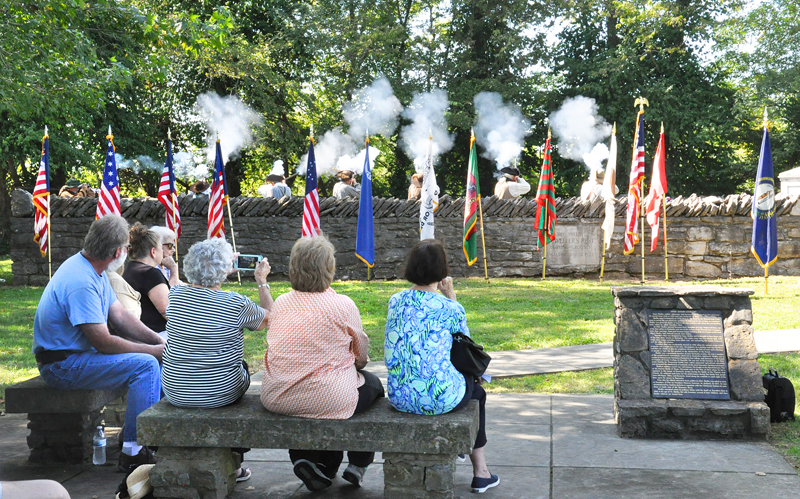 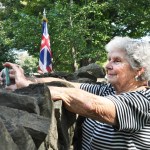 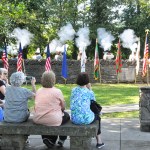 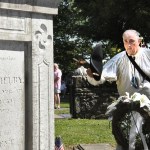 Photos by Robin Hart/rhart@amnews.com Kent Marcum, SAR member, tips his hat to the Isaac Shelby gravestone after placing a wreath. 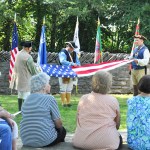 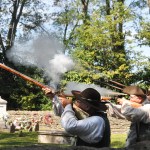 Photos by Robin Hart/rhart@amnews.com Members of the Robley Rex Veterans Administration, Military Funeral Detail, give a military salute in the Shelby cemetery. 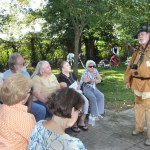 JUNCTION CITY – On Saturday’s warm and sunny afternoon, representatives of area Sons of the American Revolution donned full Revolutionary-era garb — wool coats, pants and hats as well as heavy rifles and flags — to honor Isaac Shelby and unveil a new monument in his honor.

Shelby was Kentucky’s first and fifth governor. He was a leader in the Battle of Kings Mountain in the Revolutionary War that helped lead to a final victory over the British, and he was a Major General during the War of 1812.

According to a news release sent by Mike King, member of the Gov. Isaac Shelby Chapter of the Kentucky Society SAR, “some of the reasons for dedicating the monument on Sept. 23 was because it coincided with the date Isaac Shelby began gathering pioneer militia from ‘over the mountain’ to defend themselves against the British, who threatened to come over the mountain to burn their homes and kill all those who fought against the British Crown. The gathering of militia with others led to the Battle of Kings Mountain in South Carolina on Oct. 7 that ended the threat from the British and ultimately led to the end of the Revolutionary War at Yorktown. Currently, many historical lineage societies begin celebrating the efforts of Isaac Shelby, William Campbell and John Sevier at this time, with many groups meeting at Kings Mountain on Oct. 7 to celebrate that victory and the live of these leaders.”