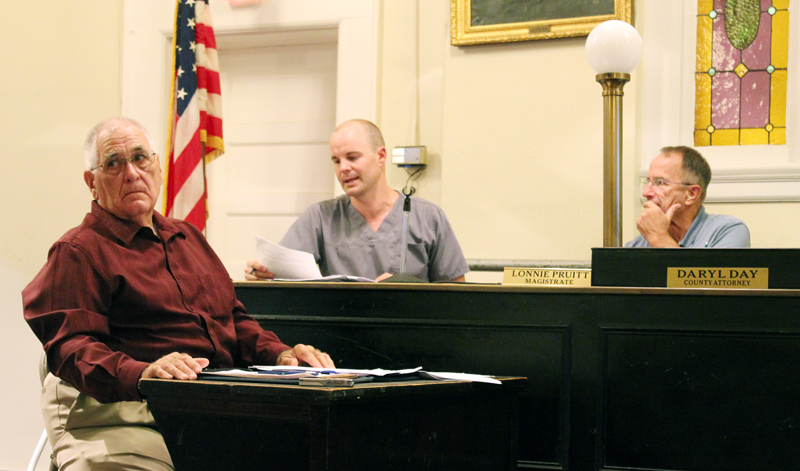 STANFORD – Lincoln County Ambulance Board members reviewed contracts for final consolidation of the county’s ambulance services this week and proposed a few changes for attorneys to review.

The board met Monday night and reviewed proposed contracts between the board and the consolidated Lincoln County EMS (LCEMS) as well as the three services’ consolidated contract.

The first change to the board’s contract was suggested by Board Member William Stafford who requested monthly reports on response times from the consolidated entity once established.

“It would be nice to know what are our goals? What do we want? What do we want them to achieve? Where are they at right now, is that adequate?” Stafford said. “Right now it just says will respond to all calls.”

“You have to respond to the call within 10 minutes, you have to be on scene within 30 is what the board of regulations (says),” Powell said.

Jeff Godby of Lincoln County EMS said the consultants’ report from Fitch and Associates stated 83 percent of the county – if served by stations in McKinney, Stanford, Waynesburg and Crab Orchard –   had a 15 minute response time.

Godby said with the new station being built in Hustonville factored in he believes that percentage went up to 91 percent.

“That’s fantastic,” Stafford said. “So based on this study, it should be possible, on average or even most of the time, 15 minute response times?”

Godby indicated that was possible.

Board member Ted Deffosset said at some point in time taxpayers are going to ask if the increase in taxes have given a higher level of service.

“We’re pretty confident that’s going to happen,” Defosset said “But it would be very clear and valuable to have (that) number…That has some merit.”

Powell said he would like to study the national and state averages for response times before setting a bench mark within the contract.

Board member Keith Lemons asked if Boyle County’s choice to join Lincoln and Garrard Counties under Bluegrass 911 would affect response times in Lincoln. Judge-Executive Jim Adams said the merger should have no effect and could lead to better coverage for all three counties since the cost would be shared among three counties.

Bob Floro, vice chairman of the board, suggested the four coverage areas previously discussed be included in the contract language.

“For this board’s edification, it certainly needs to be in our contract with Lincoln County ambulance service to address coverage in all four areas,” Floro said. “It mentions it but doesn’t specify that we will have defined coverage in the west end, south end, east end and Stanford.”

The contract between the board and consolidated entity requires LCEMS to submit special requests for additional funding outside of the general operating expenses, as well as quarterly run reports. Monthly financial reports will be required, with the addition of response times as suggested by Stafford.

LCEMS will also be required to maintain communication with the agency medical director, report on agency held educational trainings and maintain the physical structure of each building used by LCEMS.

Stafford suggested the board add vehicles and equipment to the maintenance requirement, as well as malpractice insurance.

“If they were not covered by malpractice, this board could be very concerned if not automatically liable,” he said.

All the of the proposed changes were approved unanimously by the board. Stafford abstained from the motion to specify the four coverage areas would be staffed by a working ambulance at all times.

While the board has waited several months for the contracts to be completed, members said it would be another month until the contracts are approved so that attorneys for each group can review the changes.

Since funds have not been disbursed to the consolidated service, Powell submitted a consolidation funding request that maps out three-months of estimated costs for a total of $168,400.

“Our goal was to make this happen some time between Oct. 1 and Oct. 15, however, that is based on funding,” he said. “Just keep in mind, until we know we get this funding, we can’t move forward with the operational logistics as far as the takeover. If we’re shooting for the Oct. 1-15

The next regular ambulance board meeting is scheduled for Oct. 16.

Stafford objected to disbursing the total amount until the contracts are signed but agreed with the funding of a $50,000 Stryker Power stretcher/power load system. A motion to approve the $50,000 for the equipment passed with all members voting in favor.

Floro reminded board members the ambulance board attorney’s term expires at the end of this month. Shelton tasked Floro with finding a new attorney as to not delay the consolidation process any longer.