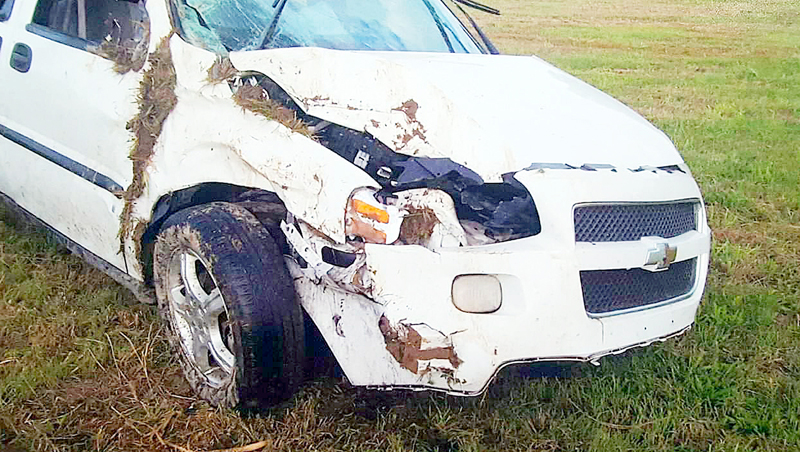 Photo courtesy of Lincoln County Sheriff’s Office A van involved in a rollover accident on Ky. 78 Tuesday morning rests upright in the middle of a field.

STANFORD – A mother and her five children were transported to the hospital Tuesday morning after a rollover accident on Ky. 78 ejected them all from the vehicle.

Whitney Berry, 26, was driving west on Ky. 78 when the accident occurred, according to Lincoln County Sheriff’s Deputy Mike Mullins. She was accompanied by her five children – three females and two males of ages ranging from one-to-six years old. They were all transported from the scene to Ephraim McDowell hospital in Danville.

Mullins said when he arrived on scene the six-year-old male was standing outside the vehicle crying.

“The male was okay. He had a pretty good laceration behind his ear,” Mullins said.

The van had rolled several times, from end-to-end, before coming to rest in the field on all four wheels.

“I’d say the (kids) were laying about 25 feet apart from each other,” he said. “One car seat was thrown about 25 feet from the vehicle from where it stopped.”

According to two witnesses, Mullins said Berry was seen traveling at a high rate of speed at the time of the accident.

“She passed them running at least 80 (mph) up the hill from Cash Hill on a double-yellow line and when she came back around them, that’s when she overcorrected it and went off into the field,” he said. “The lady that gave me the statement, both ladies, said each time the vehicle rolled from end-over-end, a child was thrown out of the vehicle.”

Berry was also connected to a call received by dispatchers prior to the accident, he added.

“Speed (is) a big factor because we got a report about 15 minutes prior to the wreck that she was coming from (US) 150 west at a high rate of speed and about 15 minutes after that we got a call on the wreck,” Mullins said. “The person who reported it gave us the last three numbers of the license plate number which matched the white van.”

Mullins said it did not appear that the children had been properly restrained in the vehicle.

“Evidently not, they were all ejected from the vehicle,” he said.

In addition to speed, Mullins said drugs are also a possible factor in the rollover accident.

As of Tuesday night, Berry and one child were still in critical condition and on life support, according to the deputy.