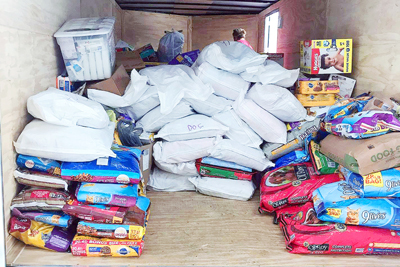 Photo courtesy of Greg Snow Supplies gather throughout the week as local donations for Hurricane Harvey victims continue to grow.

STANFORD – Lincoln County residents are pitching in to help victims of Hurricane Harvey by sending trailers of supplies to Houston.

On Monday, two 25-foot trailers, loaded down with a variety of local donations from diapers to dog food, left Lincoln County and headed to Texas.

Photo courtesy of Greg Snow
A truck bound for Texas is filled with local donations for victims of Hurricane Harvey.

Supplies aren’t the only donations pouring in though, according to Gary King, Lincoln County Baptist Association’s director of missions.

That money will be sent to the Kentucky Baptist Disaster Relief, he added. Other churches and groups in the area have also been gathering donations to send to Texas, King said, including Forks of Dix River Baptist Church.

According to the church’s Facebook page, donations are still being accepted and will be from Sept. 6 – 14 at four different locations: Forks of Dix River Baptist Church every day between 3 to 7 p.m. and Saturday from 10 a.m. to 6 p.m.; First Southern National Bank in Lancaster and Nicholasville, weekdays from 9 a.m. to 4 p.m.; and the Jessamine County Fire Department, everyday from 9 a.m. to 9 p.m. 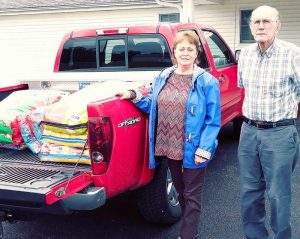 A local eating and event venue, Backporch Clubhouse Venue, has also been accepting donations to send, as well.

“We have 50 other volunteers that were out there yesterday from across the state that are trained in food handling,” King said. “So they’ll be helping Texas baptists serve food.”

King said the two trailers delivered supplies to the Humble Area’s First Baptist Church in Texas and he expects more supplies to leave out next week as well.

“100 percent of every dollar they give will go to help with Harvey,” King added. “No administration costs or anything is taken out. We send it right on for the relief there.”

King said the support from the local community has been tremendous.

“The way things have come in…Burkman Feeds out of Harrodsburg brought over a truck load of dog food,” he said. “A place in Harrodsburg took a load of paper towels and toilet tissue.”

King said the people in Texas receiving the supplies were very grateful.

King said if another storm hits Florida, as expected, the baptist association may be sending supplies and volunteers that way.

“We have over 500 volunteers and can still send them to Florida,” he said.