CRAB ORCHARD – After realizing that two of the three candidates being considered to fill a Crab Orchard City Commission vacancy were ineligible to run, commissioners voted last week to appoint the only eligible candidate left on the list.

This was the commissioners’ second vote after the first vote on Aug. 28 ended with a tie between Keith Saylor and Tim Saylor.

Caudill resigned from the commission in August, leaving city commissioners 30 days to appoint a replacement. Commissioners also had the option of allowing the governor’s office to make the appointment – which would have been the case had they not met the 30-day deadline.

City Clerk Nancy Baker said last Thursday, since the decision was an appointment and not an election, commissioners weren’t sure if the eligibility requirements for an election would apply.

After speaking to County Clerk Sonny Spoonamore, they learned two of the three interested candidates – Mike Eldridge and Tim Saylor – were not eligible for the appointment.

In order to be eligible for the seat, the candidates must have lived in the city for at least a year.

Shelton said the only choice left, of the three, was Keith Saylor.

A motion was made by Billy Shelton to appoint Keith Saylor as water commissioner to serve the remainder of Caudill’s term, which ends in 2018. Commissioner Jerry Shelton seconded the motion. Commissioner Pettit abstained from the vote.

“I’m not voting, so I mean, it’s going to count, but I’m not saying, ‘hey, hey, hey,’” Pettit said. “So I’m going to abstain, even though it will count yes…and it’s not for personal reasons…”

Saylor was formally sworn in on Wednesday, Sept. 6, according to Baker. 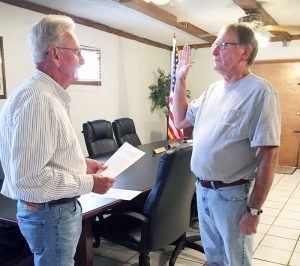