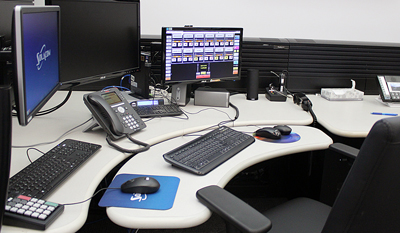 STANFORD – With the recent court ruling giving the OK to put fees on water meters to fund the Bluegrass 911 services, the Lincoln County Fiscal Court has approved the first reading of an ordinance to repeal landline fees and replace them with a $4 water meter fee.

Magistrates voted unanimously Aug. 22 to move forward with the plan to repeal the $4 landline fees and place them on active water meters throughout the county – the goal being to distibute the funding burden more evenly across the county.

Magistrate David Faulkner asked County Attorney Daryl Day last Tuesday morning if the fiscal court is owed the monies from the 25 cent fee that was placed on meters in 2012 as a way to move the issue to the courts.

Day said if there was any action taken by either Lincoln or Garrard County fiscal courts, or anything in the minutes of either court that indicates a discussion about not collecting the fees took place, then that could be used as a means to not enforce that 2012 ordinance.

“Absence of something like that happeneing, technically, yes, an ordinance is a law and if it imposes that quarter fee, tehcnically you can go to all the water companies and say ‘you owe us a quarter water fee per month for the last five years,’” Day said.

Faulkner said he wasn’t trying to “push that” per say, but Lincoln County taxpayers’ dollars were expended on things they weren’t intended to be because of the ordinance in place.

“Don’t we need to either do some kind of resolution to forgive that, or if we don’t do something, it’s going to sit there forever. It’s still valid,” Faulkner said.

Day said he agreed, general fund tax dollars were used to fund the Bluegrass 911 services during that time, but the tax dollars came from the same people who will be paying the water meter fees.

Just to clear up the record, Day recommended the court pass a resolution in the near future to repeal the quarter fee or enforce the quarter fee, with an additional amount to make it $4 per water meter.

Magistrate Joe Stanely asked about multiple cattle waterers and whether farmers can apply for exemptions if they have several meters.

“Bluegrass 911 has come up with a form where people can come in and apply. I don’t know what the maximum is set, maybe three,” Day said. “They will set a maximum number and if you have more than that, unoccupied parcels, they would consider each request on a case-by-case basis on whether you’re entitled to relief.”

Lincoln County Judge Executive Jim Adams said he was glad the court process was finally over.

‘It will be a relief to our budget in the amount of about $50,000, $35-$50,000 from general fund monies. Then it should allow for the sustained growth of 911 with all that’s going to change there with technology. It’s expensive, all you guys know. So it’s a good thing,” Adams said.

Day said Bluegrass 911 provides great services – so much so that Boyle County was looking to merge with Lincoln and Garrard to use the center as well. Since the Aug. 22 Lincoln fiscal court meeting, Boyle County Fiscal Court magistrates have voted to pursue a dispatch merger with Bluegrass 911 in Garrard County.

“Most people probably didn’t realize this – our technology is about 10 to 12 years ahead of theirs,” Day said. “The services you get from our 911 center when you call in, we are lightyears ahead of them. If you call in, someone else in your house is having a heart attack, our 911 dispatchers can give you step-by-step procedures you need to do to help save that person’s life. Danville can’t do that and right now they’re saying they can’t afford to do that…”

Day said Bluegrass 911 operators can type the incident into the computer and immediately bring up what actions need to be taken to help save a life.

“As of now, the 911 dispatchers in Danville will not give you any help if someone is in a life or death situation. They will not tell you what you can possibly do to help them,” Day said. “When you get services or you need help like that, $4 on your phone line or you water bill is a very, very inexpensive charge.”

Faulkner said the fact that Boyle County is looking to Bluegrass 911 for a merger validates the notion that Bluegrass 911 is top-of-the-line in the area.

Lincoln County magistrates unanimously approved the ordinance placing a $4 fee on water meters and to repeal the $4 fee on landline telephones.

Stanford Mayor Eddie Carter was in attendance of the Aug. 22 meeting and asked why the fee had changed to $4 from the original $2.50 the court had discussed last year.

“There are some things that each county and cities have been doing as part of the 911 system, like putting up towers and things like that –  all of that is now going to be turned over to Bluegrass Communications,” Day said. “They will run both counties as one entity. At some point in the future as we make changes, all of the towers, the repeaters, the things like that to get the signal out, that’s all going to fall under 911 and it will be the same, whether it’s in Garrard County or Lincoln County.”

Bluegrass 911 is taking on more responsibility, which is why they chose to move forward with the $4 fee, Day said.

“My understanding in talking to (Bluegrass 911 Director) Russ Clark, the only thing that the agencies will be responsible for will be their radios so they can receive the signal. But Bluegrass 911 will take care of everything as far as getting the signal out to the radio to see it,” Day said. “So, there may be an increase in what we were talking about. We’re turning more over to them than what they were responsible for before.”

Stanford, Crab Orchard and Hustonville all passed similar resolutions last year that prohibited the collection of the $2.50 water meter fee until the case was resolved through the courts.

“I do know that we are going to draw a line in the sand, if you want to call it that, and from the day this second reading is done and the date we establish the $4, then each of the water companies are going to be responsible for that $4,” Adams said. “If they choose not to pay us and we end up in court again, if we get a favorable ruling then part of that ruling will be, I hope, reimbursement from that day forward,” Adams said.

Day said as far as the courts go, the fee is now legal.

“I don’t know of any way they can get around having to collect that,” he said.

Faulkner reiterated his opinion that the court is technically owed by water companies in Lincoln County for the quarter fee that was placed on water meters in 2012.

“We do have to deal with the issue, legally, because it’s there. It’s there, it’s established, so we either have to forgive it or collect, in my opinion,” Faulkner said.

Day said it will be September before the Lincoln County Fiscal Court can pass a second reading of the ordinance and likely late Sept. or in Oct. when the ordinance takes effect.