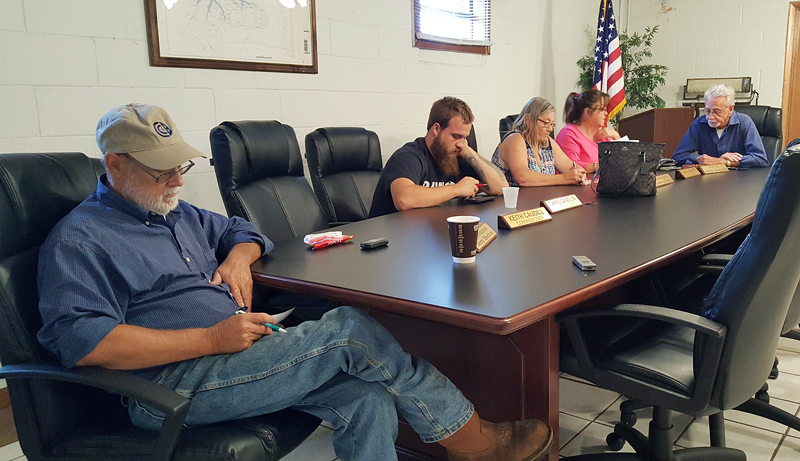 CRAB ORCHARD – After a tie vote Monday night, the Crab Orchard City Commission has decided to vote again this week to fill a vacant position.

With the recent resignation of City Commissioner Keith Caudill, the remaining commissioners have been working this month to fill the vacancy within the 30-day time period.

On Monday, Aug. 28, commissioners gathered for a special-called meeting to vote on three people who expressed interest in filling the position.

City Clerk Nancy Baker said each commissioner put the word out in the community that they were looking for interested people to serve and received five names. Of the five names, three showed up to the working meeting held earlier this month and those were the names the commissioners voted on Monday night.

“We approached several different people, all of us did,” Baker said. “Those were the three that showed interest and came to our last meeting and we answered any questions that they may have had about the position.”

Commissioners Jerry Shelton, Chris Sandlin and Juanita Pettit, as well as Mayor Billy Shelton, voted on the three names but it came to a tie vote with two votes for Tim Saylor and two for Keith Saylor.

The commissioners debated whether to have a second vote or to send the list of names to the governor’s office.

Commissioner Sandlin suggested just sending the list to the governor’s office and letting them pick the replacement.

If the commissioners do not appoint someone within 30 days – by Tuesday, Sept. 5, due to the Labor Day holiday – then, according to Kentucky Revised Statues, the governor will “promptly fill the vacancy.”

Gracie Gilbert, a Crab Orchard resident in attendance, asked if any of the commissioners were related to the three people they were voting on Monday.

Pettit said one (Tim Saylor) is her brother. Shelton said he is related to Keith Saylor and the mayor said two of the three people were his second cousins.

“That’s a problem we have, even when we try to hire somebody,” Jerry Shelton said. “Somebody is always kin to somebody.”

Pettit said when someone shows interest in serving the community, they are often related to those already serving.

The mayor asked City Attorney John Hackley if they do choose to let the governor appoint someone, will they need to send the list of all three names or just the two that reached a tie vote.

Hackley suggested sending the entire list and noting the two who were tied.

“I don’t think there’s any prohibition, the governor can pick anyone,” Hackley said. “Might just send him a note, ‘These are the three interested, these are the two that we tied upon, two a piece,’ and he has access to names in Crab Orchard if he wishes to make a third selection.”

“The three who showed interest have never been to a meeting before,” Pettit said. Pettit added that they did attend the last working meeting when they were included on the list of interested and were invited to ask any questions they may have about the position.

Hackley said there’s nothing to keep the commissioners or citizens from calling the governor’s office and telling them which person they’d prefer to fill the vacancy. But the governor can choose someone that is not included on the city’s list.

“He (the governor) can go outside the list, that’s the risk you run,” Jerry Shelton said.

Commissioners agreed to vote again on Thursday (today) at 3 p.m. If the commissioners cannot agree today on the replacement, they will send the list and let the governor choose.

“That’ll give us some time to talk to them a little more,” Sandlin said.