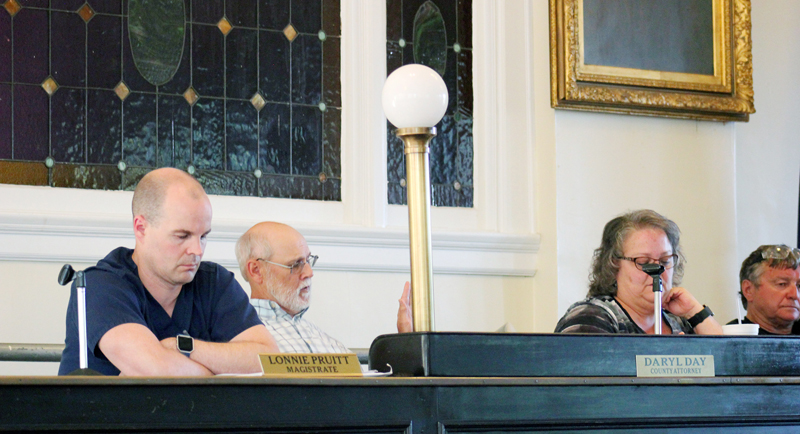 Photo by Abigail Whitehouse Members of the Lincoln County Ambulance Board discuss disbursements July 17 during their regular meeting.

STANFORD – The Lincoln County Ambulance is still waiting for the consolidation of the county’s ambulance services to reach completion and until then, they are continuing to keep quarterly disbursements low.

The board voted unanimously in February to set aside all excess money received as a result of the tax increase and disburse funds at regular amounts until the consolidation process is completed.

While the board disbursed more during the regular July meeting than they have previously, members continued to urge ambulance services to complete the consolidation process.

Jonathan Baker, local attorney, spoke to the board on the current contract negotiations between services and the timeline for a final agreement.

“We’ve sent the proposal, Lincoln County, to East End and Waynesburg and they’ve responded. I’ve spoken with Ashley (Powell) and I think we’re going to try to meet, all three organizations and Mr. (Neal) Tucker, to sit down and try to work out the final logistics on it,” Baker said. “I think everything, the principle, is pretty much agreed to, it’s just a few questions about how things will work…”

Baker said the services should be ready to consolidate within two months.

Board member Billy Phillips questioned why it would take another two months to consolidate.

“It may not be two months but I don’t want to tell you a month and then it’s not,” Baker said. “It may easily be quicker. I feel confident that’s a safe date.”

Board Member William Stafford asked if the consolidated service has any plans for how the coverage in the county will change.

An Advance Life Support (ALS) truck will be located in Stanford and Hustonville, while Basic Life Support (BLS) trucks will be in Crab Orchard and Waynesburg and to add a chase paramedic. according to Lincoln County EMS Director Ashley Powell.

“In doing that, we’ll allocate more resources rather than having to use two ambulances on a call,” Powell said.

The new contract will also free up ambulances in Crab Orchard in Waynesburg for non-emergency transportation, which is currently restricted by state regulations while they remain separate entities, Powell added.

“Once it’s under one umbrella…it’s going to add utilization resources for those non-emergent and emergent transfers for citizens,” he said.

The amounts are slightly higher than the last quarterly disbursements, despite the board’s previous agreement not to disburse above the average amounts until the services are consolidated.

Stafford said he doesn’t recommend giving the services a dollar more than they have received in the past because they have yet to come up with the new contracts and completely consolidate.

“They’re months behind what they initially said,” Stafford said. “That’s really important for us. When they combine, when they start functioning as a single unit, the whole county sees benefits. Don’t pay them as if they’ve done that already when they haven’t.”

Phillips said the July disbursement was only $5,000 higher than the previous quarter for East End and Waynesburg and $10,000 higher for Lincoln County EMS).  The motion passed with Stafford voting against it.