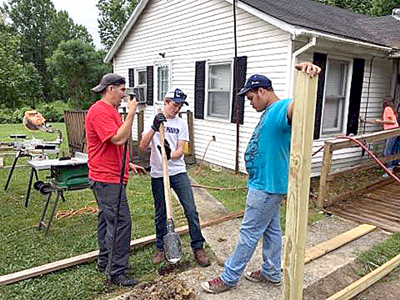 Story and photos by Kevin Coots

STANFORD – About 45 teenagers and 25 adults teamed up recently to share their love of Jesus Christ throughout Lincoln County.

For the 14th consecutive year, Lincoln County Changers assembled to meet the physical needs of a number of residents in the county by building wheelchair ramps, repairing porches and roofs and performing a number of other repairs.

According to Keith Kirkpatrick, the idea for Lincoln County Changers came about in 2002 as he and a team were returning from a mission trip in Tennessee.

One of the team members asked where they would go the following year, and another suggested that they stay at home and do mission work on the local level.

As a result, Lincoln County Changers was born.

The goal of Changers, in addition to the construction jobs, is “to let the light of Jesus shine in Lincoln County,” Kirkpatrick said.

It is the same reason that nspired Angela Peck and her daughter Maggie to participate in Changers.

Peck has participated for 10 years.

“(Changers is) a bright light in my summer and it’s a blessing to meet so many people and develop relationships with them,” Peck said.

Maggie, a 2017 LCHS graduate, said that she has worked with the group for the past seven years so that she “can go out and spread His word and shine His light.” Although heading to the University of Kentucky in the fall, Maggie Peck says she will continue to be a part of Changers in the future.

Carter Tillett and Woods Smith, both 15-year-old sophomores at Lincoln County High School, pointed to the ability to grow in their walks with Jesus Christ by serving others.

“It’s been a great experience to help people in need,” Smith said.

The group has been a benefit to Tillet, too.

“Changers has helped me to grow in Christ and help other people. It’s been great,” he said.