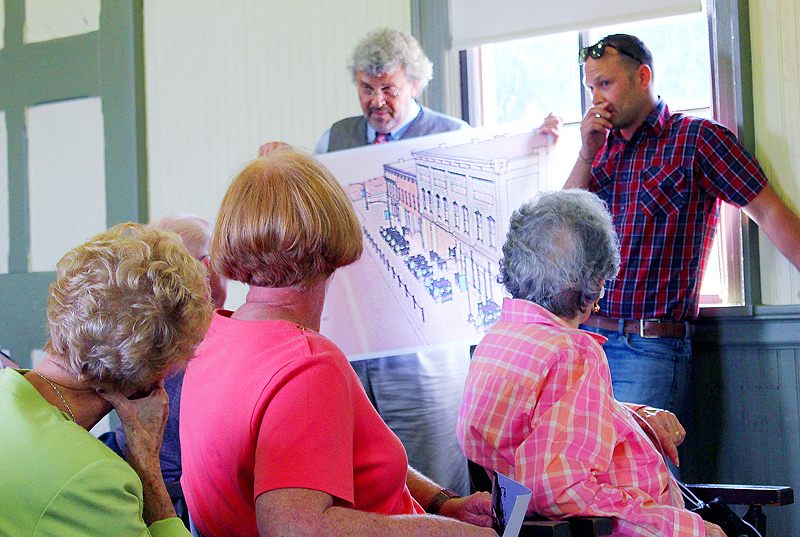 Photo by Abigail Whitehouse Engineer Garland Vanhook answers questions about a sidewalk expansion plan on Main Street that would have accommodated an outdoor eating area for the Bluebird restaurant.

STANFORD – State transportation engineers have denied the city’s permit application to expand sidewalk on Main Street – an effort to correct a water drainage issue, while accommodating an outdoor eating area in front of a local restaurant.

Questions surrounding the legal use of the area, as well as the need to establish safety and maintenance standards related to the design, were the reasons for denying the permit, according to Amber Hale, information officer for the Kentucky Transportation Department’s Cabinet’s District 8 office.

The City of Stanford approved the application for the permit during the regular April meeting after hearing a rundown of the design from architect Garland Vanhook, AGE Engineering’s Doug Gooch and First Southern Facilities Manager David Sullivan.

The plan, which aimed to protect the structural integrity of the Bluebird restaurant building and others on that block of Main Street by redirecting gathering storm water under them to the St. Asaph creek, also included a design for an outdoor eating area.

The design called for the expansion of the sidewalk in front of the Bluebird by about eight feet into Main Street, which is a state highway road.

When considering permits, Hale said engineers travel to the area to study and evaluate several factors.

“Our engineers, they go out and they take a look at it, see what effects could happen with it,” Hale said. “They look at the background, the history, as far as traffic patterns through there, traffic counts, pedestrian traffic – they just look at everything that’s involved there.”

Based on those observations, engineers denied the city’s permit to expand the sidewalk on Main Street. Hale added that the city has the option of taking Main Street into their road and street system and therefore determining their own proper use of the parking areas.

Vanhook said last week that he hadn’t received official notice of the permit denial but in light of the news, he and Gooch will revisit the design and work to find another solution to the water drainage problem.

“The solution won’t be the same, and the solution probably won’t be ideal, but we will try to address, essentially, the drainage problems associated with the building in as ideal of (a) fashion as we can,” Vanhook said. “The ideal situation is that all the water ends up in the creek, all the time.”

Vanhook said the moisture in the buildings has caused damaged and needs to be resolved to maintain the structure as well as property values.

“100 years of change – when they built those buildings, there was no run-off because the ground basically absorbed the water,” he said. “Modern asphalt and concrete, and all the stuff that comes with surface water and storm water needing to be dealt with, and curbs and gutters and all that stuff, it has eroded and damaged the first floors of those structures to the point that it has to be addressed for those buildings to continue to be useful.”

If not addressed, the buildings could become uninhabitable in the future. For now, Vanhook said he will be looking at different solutions to the issue.

“The street cafe, there’s no room for that. So that concept will go away on Main Street,” he said.

For now, it’s back to the drawing board for Vanhook and engineers, but their main goal  hasn’t changed.

“That’s what designers and engineers and architects get paid to think and rearrange outside the box, or inside the box, whichever is the easiest or the most creative way. We’ll find a way to be creative,” he said.